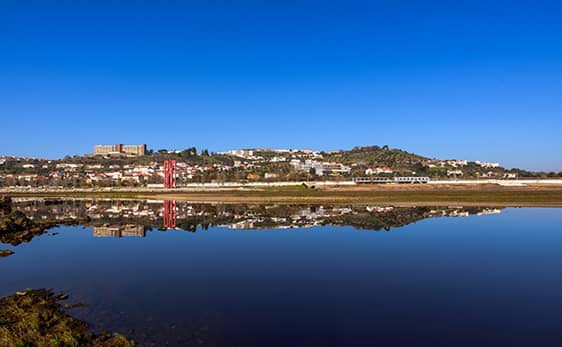 The city of Abrantes, said to be made of gold and flowers, is situated in the middle of Portugal along the banks of the River Tejo. The name comes from the Latin, aurantes, for the alluvial gold found along the riverbed. Every May the city blooms into a rainbow of colorful flowers that decorate every inch of it, giving it the title of the most flowery city in the country.

Abrantes was first occupied by the Celts in 300 BC, before the Romans showed up and left their mark on the city. But it was the king of Portugal, D. Alfonso Henriques who was credited for discovering the city in the middle of the 12th century and officially giving it city status.

With a population of 40,756, the city is rich in history. Abrantes played an integral role in Portugal’s history during the Christian Reconquest or French Invasions due to its strategic placement along the River Tejo.

Things to Do in Abrantes

Abrantes Castle sits perched on a hill some 650 feet above the city and offers a bird’s-eye view of the area. The castle is part of the Linho do Tejo, a sequential line of eight to 12th-century fortifications built along the River Tejo during the Middle Ages.

The Church of Santa Maria do Castelo is situated inside the castle complex. Built in the 1400s, historians believe it was constructed on the exact spot where a Roman temple once stood. Proof of this came from a marble statue that was discovered during an excavation. The statue and other artifacts are displayed inside a nearby museum.

Igreja de São João Baptista was founded in 1300 by Queen Elizabeth of Portugal. During a service here on August 8, 1385, King John I spoke before heading off to the famous Battle of Aljubarrota, vowing to return and offer thanksgiving for success in the battle. He did return after achieving victory and had a marble statue of Saint John erected in the church to give thanks.

The ancient church of São Vicente was founded in 1149 but later destroyed by the Moors during an attack. It was rebuilt during the 16th century and then again in the 17th century after it was damaged in a landslide. It holds within its walls the shadows of a secret marriage held here between Pedro and Ines. Pedro served as King of Portugal from 1357 to 1367 and was forced into an arranged marriage by his father. Pedro was in love with Ines of Castro, and despite his father’s wishes, the couple married in this medieval church.

Stroll along the cobbled streets of the old town and stop for an espresso, glass of wine, or a meal on the main plaza. Admire the stately manor houses, some decorated with traditional tile in mosaic patterns. Up the hill is the Jardim da República, a lovely green space with a cafe. Abrantes holds a daily market housed inside a modern structure designed by architect brothers, Nuno and José Mateus. This is the perfect spot to pick up fresh produce, fish, local honey, handicrafts, spices, and more.

Located just six miles from the city center are the river beaches of Albufeira do Castelo do Bode. The perfect way to cool off on hot summer days or for canoeing, kayaking, or windsurfing in the tranquil waters.

The nearby town of Tomar is just a 30-minute drive from Abrantes and the perfect way to spend a day. Explore the Convento de Cristo complex that was once home to the Knights Templar and still holds the secrets of the mysterious order within its walls. Meander through the town’s main plaza, visit the riverfront park with its vintage waterwheel, and relax under the shade of a willow tree.

Lisbon International Airport is a little over an hour’s drive from Abrantes and offers connecting flights to the U.S., Canada, Europe, and almost everywhere else.

When the ocean calls head to Nazaré to chill on the golden sand or watch as daredevils tackle the biggest waves in the world. The colorful wives of traditional fisherman can be seen selling their handicrafts, while dressed in seven-layered skirts, wool knee socks, and head wraps.

For expats longing to live in a real Portuguese town, with cooler temperatures, yet surrounded by culture, history, and welcoming people, central Portugal might be for you. But those who choose to live in Abrantes should plan to study Portuguese since English is not commonly spoken.

The city offers plenty of small shops, restaurants, and even a modern shopping mall with a cinema. Movies are shown in their original languages, often in English with Portuguese subtitles, and tickets sell for less than $8.

The city has several hospitals, as well as medical and dental clinics, to cover all your healthcare needs. Residents of Portugal have free access to the public healthcare system, but small copays apply when seeing a doctor.

Cost of Living in Abrantes

The cost of living in Abrantes is affordable. Here a couple could live nicely on $2,000 a month depending on lifestyle. Just as in the rest of the country, most of your budget will probably go towards your rent or mortgage. Expect to pay $650 for a furnished, two-bedroom apartment in the city center. Add another $100 or more for utilities (electric, water, gas), another $65 for an internet/cell phone package, $400 for groceries, $200 for dining out, and $150 for private health insurance. Rates will increase with age, pre-existing conditions, and how comprehensive the policy may be.

Should you plan to own a car, additional expenses will be incurred for gasoline or diesel, insurance, and maintenance. A public transport pass can be purchased for $40 per month if not having a car is more your style. Gym membership in the city will run around $40 per person and typically is discounted for couples.