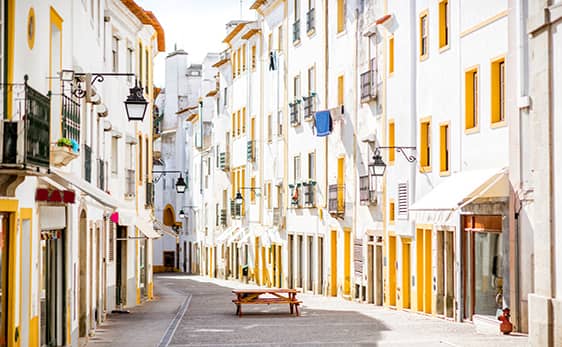 The Alentejo—the largest region in Portugal—covers over 30% of the country’s land mass, yet is populated by just 5% of the population. Though far less popular with expats than hotspots like Lisbon, Porto, and the Algarve, those who dwell here become fully immersed in the Portuguese culture. Defined by expansive fields of wildflowers and cork oak trees, this interior spread offers visitors rolling hills, medieval fortified villages, and the city of Évora.

Recognized by UNESCO in 1986 as a World Heritage Site, the city is a living museum that dates back to Roman times. Rich in wheat and silver, Évora held an important spot on the trade route to Rome from the second century BC to the fourth century AD. The Moors dominated here from the eighth to 12th century, before Portuguese nobility took over during the city’s glory days. Today Évora thrives on tourism and receives thousands of visitors from around the world who come to embrace the charms of this medieval walled city.

The lifestyle here is rural with expansive plains of colorful wildflowers in the spring that give way to dry, grassy vistas during the summer months. Sheep, cows, and horses graze throughout while gentle, rolling hills stretch as far as the eye can see.

Perhaps one of the reasons that fewer expats call the Alentejo home is because weather can be extreme. Hot, dry summer temperatures can climb to 100 F or more, while winters are cold and wet. Although there is a public bus system in the city, expats here would probably want to have a car.

For your shopping convenience, Évora Plaza features 80 stores, tons of free parking, and is complemented by a food court that includes a mix of regional, national, and international cuisine. The only cinema in the city can be found here with first-run movies offered in English.

The city has several public hospitals, along with private ones that offer a wide range of medical care. Dental clinics abound for expats to take advantage of the low-cost care. Évora University, one of the oldest public universities in the country, gives the city a youthful feel.

8 Best Things to Do in Évora

Often referred to as The Temple of Diana—because, according to legend, it was dedicated to the Roman goddess of the same name—the impressive temple stands proud in the middle of the historic center of town. This well-preserved slice of history is a favorite among tourists and one of Portugal’s most important Roman monuments. Erected between the second and third century AD, 14 of the temple’s columns remain standing—each topped off with Corinthian capitals. Step onto the temple’s solid base of granite and imagine how life once was so long ago.

Termas Romanas—Roman baths—were discovered in 1987 beneath the town hall and date back to the first century AD. An arched doorway leads to a sunken room featuring a well-preserved, circular steam bath. Evidence of an ancient heating system, along with an open-air swimming pool, can also be seen here Let your mind wander as you pretend to drop your toga and immerse yourself in one of the luxuries of Roman life. The baths are open on weekdays and, as if you needed another excuse to visit, admission is free.

3. The Chapel of the Bones

One of the strangest tourist attractions in Évora is the Capela dos Ossos, located inside the Igreja de São Francisco (Church of St. Francis). The Chapel of Bones is adorned with the remains of over 5,000 monks that have been unearthed from local cemeteries in order to free up room for others. Hundreds of skulls and body parts line the walls in a rather eerie fashion, yet this still remains one of the city’s most popular tourist attractions. Upon entering the chapel visitors are greeted with a message that reads: “Nós ossos que aqui estamos, pelos vossos esperamos.” (We bones that are here await yours).

4. Palace of the Dukes of Cadaval

Built on the ruins of a Moorish castle in the 14th century, this ancient palace—which is situated across from the Roman temple—has been home to the Dukes of Cadaval ever since. The remaining structure features remnants of the original castle and walls that once surrounded the ancient town. Today the palace is still the private home to the dukes, but the family has elected to open up some of the rooms, along with the church, for public viewing. Items on display include suits of armor, weapons, manuscripts, paintings, and other family heirlooms.

The Évora Cathedral (Sé Catedral de Évora in Portuguese) was built in 1204 and looks more like a fort than a church on the outside. Its sturdy exterior features a mix of Romanesque and Gothic architecture, accentuated by a pair of bell towers that add to the fort-like feel. Visitors are mesmerized at the entry portal by stunning rows of sculptured apostles that welcome all who enter. Once inside visitors are embraced by the stillness that fills the air and awestruck by the ornate interior. Be sure to head to the rooftop for spectacular views overlooking the city.

The Évora Museum is housed inside a former 16th-century palace that was once home to noblemen and bishops. The inside was remodeled in 2009 and today offers visitors a family-friendly space that is light and airy. A collection of over 20,000 items features paintings, sculptures, Roman artifacts, tombstones from ancient times, along with plenty of local history to keep admirers busy for hours.

7. Church of Saint John the Evangelist

Although modest on the outside, visitors will be dazzled once they step inside the 15th century Igreja São João Evangelista. The walls are covered from floor to ceiling with a ravishing display of blue and white “azulejos”— tiles depicting scenes from the life of São Lourenço (Saint Lawrence). Stroll along and admire the detail put into these masterpieces that were carefully painted by António de Oliveira. The exquisitely carved gilt altar is captivating and offers a stark contrast to the blue-tiled walls that surround it. As a gruesome sideshow, the church houses an ossuary full of bones pulled from nearby tombs.

Évora’s central plaza is the perfect spot to stop for a bite to eat while sipping a glass of wine and watching life go by. The square takes its name from Geraldo the Fearless, a famous outlaw who ousted the Moors from the town in 1165. Shops and restaurants surround the large fountain that takes center stage, and every weekend this hub comes alive with locals shopping for bargains at the market. During the summer locals gather in the plaza to enjoy free concerts, live theatre, and street performers.

Summer heat in this region of Portugal can be intense, with highs reaching well over 100 F, so the best time to visit Évora might be spring or fall. Winters here, like the rest of the country, are cold and rainy—something else to keep in mind. The best way to visit the Alentejo region is to rent a car at Lisbon airport and make the 90-minute drive to Évora. Roads throughout the country are excellent, some of the best in all of Europe.

Cost of Living in Évora

A couple could live nicely in this historic city for around $2,300 per month, depending on lifestyle. Expect to pay $900 for a modern three-bedroom, two-bath apartment, another $115 for utilities (electric, water, gas), $400 for food, $65 for an internet/ phone plan, and $200 for dining out two times per week. Private health insurance plans begin at around $100 per couple but go up with age, pre-existing conditions, and how comprehensive the policy is. In order for pre-existing conditions to be covered in Portugal you must show continuous coverage and still be insured by that policy when you apply.

Optional costs may include a gym membership for $50 per couple, $200 for owning a car and related expenses, or a public transportation pass for $25.