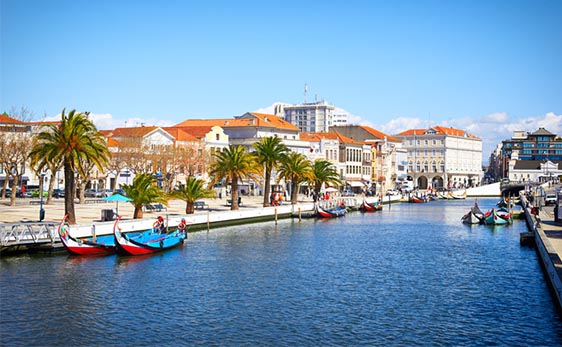 The Venice of Portugal

Feel the pulse of this charming city along its lively canals decorated with colorful, flat-bottomed boats with sickle-shaped bows. Known locally as, moliceiros, they were once used to carry seaweed, or moliço, from the marshy lagoon. Seaweed was once used as an agricultural fertilizer until the 1960’s when it was replaced by chemical fertilizers. The algae or seaweed was collected using a large wooden rake called an ancinho.

Nowadays the moliceiros transport tourists from around the globe who come to savor the vibe of this historic city, often called the Venice of Portugal.

Since the best way to see Aveiro is on the water, hop aboard one of these funky finds for a fun-filled and informative ride. English-speaking, passionate guides will tell you all about life in this jewel of a city in central Portugal. Gorgeous Art Noveau-styled homes line the waterfront dotted with shops and restaurants.

Just steps from the canal is the impressive Forum shopping mall that features an open-air design. With over 70 stores, a large food court, and a cinema with first-run movies in their original language, usually English with Portuguese subtitles, the mall is modern and airy.

With a population of 73,600, the city thrives on tourism along with the production of ceramics and software. And where there are tourists there are locals that speak English so getting by not knowing much Portuguese is doable in Aveiro.

Expats who desire a smaller city with a vibrant town center, plenty to do, great medical care, and English-speaking locals, this could be for you. When big-city life calls head 45-minutes north to Porto, Portugal’s “second city.” For those living without a car take the train to Porto’s São Bento Train Station. Admire the azulejo-adorned walls of the station then head into the city to explore. The train takes a little over an hour and offers discounts to those over age 65.

Spend a few days exploring the majestic views overlooking the Douro River on a cruise. Sample some of what this region is known for, port wine in Vila Nova de Gaia, or explore the tourist hotspots that made the city of Porto famous. The famous Lello bookstore was brought to light by J.K. Rowling who used to frequent the shop when she lived in the area.

Visit Porto’s cathedral one of the oldest buildings in the city’s historic center. Construction was started in the 12th century and continued through the 16th century and nowadays is classified as a national monument. Built in the Romanesque, Baroque, and Gothic styles its altar is impressive.

Meander through the streets of the Ribeira district, famous for its stacks of colorful buildings, narrow cobbled lanes, and outdoor dining specialties. Enjoy some traditional cuisine like grilled sardines, octopus, or Piri Piri chicken.

Summer temperatures in Aveiro are on the cooler side with daytime highs of 70 F to lows around 60 F. Winters are cold and wet with highs reaching around 58 F and dipping down to ’40s at night. The city averages around 37 inches of rain each year which helps to make it green and beautiful.

Portugal healthcare is excellent, ranking number twelve in the world according to the World Health Organization. Residents have the option of using the low-cost, free to join public healthcare system, or pay a bit more to use the private system. The city has several public hospitals and clinics. Hospital de Luz is a private facility with an office complex of physicians next door.

Safety is a major concern for everyone regardless of where you choose to live. Portugal was rated the fourth safest country in the world in 2021 according to the Global Peace Index. In fact, eight of the top ten safest countries in the world are in Europe making it the most peaceful region of the world.

Social media is a vital part of all of our lives these days and the perfect way to connect with like-minded expats. Some examples are Aveiro Expats, Expats and Friends in the Aveiro District, Americans & Friends PT, and InterNations Porto just to name a few. Groups arrange meet-ups for drinks, dinners, outings, language classes, and more.

Living here you will get to enjoy the picturesque canals, colorful boats, regional shops, and cafes every day. Meet up with friends for coffee and to savor the flavors of the region. Sink your teeth into ovos moles, an iconic 16th-century recipe originally made by the nuns at the Convent of Jesus. These sweet treats are made from eggs, sugar and then wrapped in rice paper often in the shapes of fish and other nautical designs. Another delight is pão de ló, a lemony sponge cake traditionally served during Christmas and Easter with family recipes dating back for centuries.

Close to the main canal is an outdoor market next to Jardim do Rossio. Here local artists create handicrafts, perfect for gifts or to decorate your home. To pick up local produce and fish, head to Praça do Mercado for the best buys.

Cost of Living in Aveiro, Portugal

Throughout Portugal, foodies can take advantage of a variety of cuisines including the affordable “meal of the day,” which ranges from $8 and $15. This set menu can include soup, an entree, a drink, and sometimes even dessert. Vegan/vegetarian options are often available but if not, restaurants are accommodating to special diets.

A one-bedroom furnished apartment in the city center may be found for $800 a month. Add another $150 for utilities, (gas, electric, water, depending on usage), internet/cell phone package, $100, health insurance for two, $150, groceries $400, miscellaneous expenses $350, transportation monthly pass $45 and dining out $400. Additional expenses may include a gym membership of $50 for two and owning a car with related costs. Private health insurance is affordable but does increase with age, pre-existing conditions, and how comprehensive the policy is.

Following is a breakdown of monthly costs for two people based on recent real estate listings and the usual budget costs, which are consistent throughout the country. Singles can expect to pay approximately two-thirds of the total figure at bottom.

As always, the best way to decide where to move is to plan a scouting trip and see a location firsthand. So when you visit Portugal and see the capital of Lisbon, and hopefully, the North, don’t just explore Porto and its sister city of Vila Nova de Gaia. Head south a bit and check out the charming “Venice of Portugal” for yet another expat option.

Aveiro: Old-World Cruising in the Venice of Portugal

The canal’s waters reflect the sun and soft light dapples the façade of a grand old mansion. I’m on a gondola-like boat gliding alongside cobbled slipways, lush parks, and ornate art nouveau townhouses, beating the crowds to an undiscovered European gem.

It may sound like Venice, but Aveiro, in central Portugal, is a smaller, more relaxed affair. No hordes of tourists here. With a population of around 78,000, Aveiro is an easy day trip by train, car, or bus from Lisbon— two hours away—and Porto— about an hour.

Curiosity brought me here on a relaxing overnight stay. Atmospheric cafés and restaurants ply their succulent wares on pavement terraces, as the sun glints off the city’s lagoon. A lunch of locally caught scabbard fish or grilled mackerel at a canal-side restaurant will cost you less than $15, including wine. Enjoy a coffee and delicious pastry to the sound of church bells and chattering starlings, and you’ll see change from $2.

If you do only one thing in Aveiro, though, make it a guided tour on a typical moliceiro boat. These brightly painted craft are a lot like gondolas and were once used for the local trade in salt and seaweed.

A cruise of just under an hour takes you through Aveiro’s maritime past, its ornately tiled historic architecture, and its bustling fish market. Cruises leave from the central Rossio area every half-hour from midmorning until dusk and cost less than $10. You may have time to sample the 15th-century Aveiro City Museum’s intricate splendor while you wait.

The city itself is no museum, though. You’ll find a vibrant community of students keeping things lively and a relaxed hospitality industry ensuring English-speaking guides and hotel staff year-round. It’s also worth noting that excellent surfing beaches are just a few miles west.