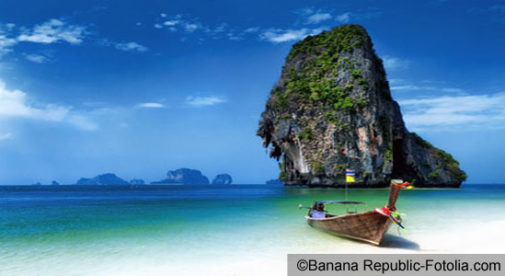 Nick Fawcus-Robinson wakes most mornings well before the sun rises. Padding around his bungalow in bare feet to make a cup of tea, while the cocks crow outside, I’m sure he ponders his past life now and again. Maybe.

Nick was an officer in the army for many years and a highly paid corporate executive in the tobacco industry after that. These days though, at age 56, Nick lives in Thailand, on the exotic island of Phuket, and runs his own dive company.

He called his dive company ScubaNicks—an indulgence that he laughs about when you ask him about the name.

“I wanted people to remember the experience of diving in Phuket but I also wanted them to remember me, and to come back to me if they enjoyed it. So I thought, why not call the company after me? And you know what? It works! Instead of people saying, ‘Yeah, I learned to dive in Thailand, but I can’t remember the guy’s name,’ they do remember me. And they do come back.”

Nick lives in a three-bedroom bungalow in a quiet suburb of Phuket called Amphoe Muang. It has extensive gardens and he has built himself a lovely gazebo, which is where he has breakfast most mornings. It’s a five-minute drive to the ocean and just a short walk to a cutesy, village-like shopping mall. He pays less than $1,000 a month for rent and utilities and the landlord was very happy to sign a long lease.

When I asked him about starting a business in Thailand he said that it was easy enough. By law you have to have a Thai partner but that’s not a bad thing, Nick says, because they can maneuver their way around the system way easier than a foreigner could. “I didn’t speak Thai either when I arrived here seven years ago and, although I do now, having a Thai partner definitely helped speed the process up.”

The Thai people are down to earth, trusting, and accepting and it was easy enough to start a business and attract the right people to work with him.

The move to Thailand was just as easy.

“I was killing myself in my job, working up to 80 hours a week, taking few holidays, and no matter how much money I earned I didn’t seem to be getting ahead. I just spent it. Then I took a holiday to Phuket and did a dive course, and I thought to myself, I could do that. So I did.”

When we discussed what we missed about industry and our past lives, and working for large corporations, we both laughed and said in unison, “the money.” But the money only allows you to do so much and in the end you have to make a decision about what kind of lifestyle you’d rather have.

As we were talking, a group of Thai teenagers from the local village walked past with towels over their shoulders, on their way to the river for a swim. They waved and shouted hello to us as they went by. Nick speaks Thai fluently these days and he shouted something back that made them all laugh.

“A few years ago on one of my days off I started teaching the kids in the village how to swim in the river, and I’ve known that group since they were five or six years old. They’re good kids and now one of them wants to become a dive instructor.”

He’s a happy, contented man and, although he talks about his corporate days, sitting watching him, tan and fit looking, it’s hard to imagine him doing anything else but living the kind of life he does in Phuket.

So I asked the question, “Do you ever see yourself leaving here and going home?”

He smiled at me and I knew the answer before he uttered it.

“Never. Phuket is home for me. My business doesn’t make me rich but I dive every day and I meet the most amazing people. I just wish that I had done this sooner.”

I get it, and I think that’s what every expat thinks when they decide to make the move abroad: We all wish we had done it sooner…

How I Turned Photography Into an Income That Funds My Travel

How to Trade Your Photos for Cash