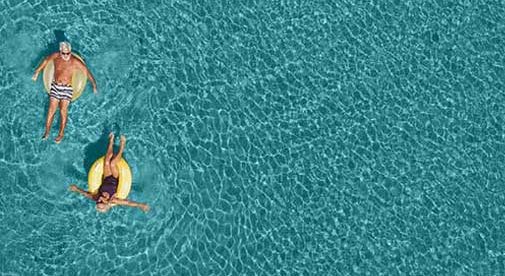 In the U.S. today, almost nobody has saved enough to retire comfortably. But in places overseas, where the cost of living is low and the quality of life is high, even a modest nest egg stretches comfortably. And the best part is: You don’t even have to move full-time to benefit.

Here are the 9 ways to retire overseas for less:

Paul and Linda Kurtzweil say that retiring early to Akumal, on Mexico’s Caribbean coast, in 2015 may have been the best decision they’ve ever made. The couple swapped their house in an average neighborhood back in Florida for a modern condo located inside a beautiful resort complex on the Caribbean.

“I retired from law enforcement after 25 years, and Linda worked in child welfare management, both high-stress jobs,” says Paul. “We are both planners, so the decision to end up here didn’t happen by accident. We spent several years looking at all our options, including a total of over 30 trips to Mexico over the years.”

“When we decided to leave our jobs and move to Mexico, we lost 67% of our annual income. The amazing thing is that our standard of living is better than it was in the States.

Carol Barron test drives her retirement overseas by travelling in low season for three months at a time, renting rather than staying in a hotel, and shopping like a local not a tourist.

On planning recent trips to Nice, Florence, and Barcelona, Carol wondered whether she could match her Florida budget on the Riviera. Kathy says “I worried that high-end destination costs could threaten my dream of living wherever I wanted. But it’s perfectly possible to live affordably”

Not content to make a permanent move abroad, Carol is happy indulging her wanderlust for a little while longer. “I’m not quite ready to live full-time overseas, but I love scouting fabulous locations for when I will be. In the last few years I’ve enjoyed three-month trial stays in top cities, grabbing tons of fun for today, not waiting for tomorrow.”

Having been a working woman all her life, and having trouble accepting that she would have to work until she died. Kathy L. Hall became a roving retiree in 2015, planning to find an affordable place to live and enjoy her retirement.

Kathy set off on her first trip as a roving retiree in Southeast Asia and says “I explored Southeast Asia for eight months on my modest Social Security income of $1,300 a month. I truly loved several places, but none inspired me to relocate permanently. So after returning to the U.S. for a few months, the wanderlust once again took hold.”

Kathy has since found her personal paradise in Manzanillo, Mexico. She says “I’ll limit my roving to just a few months each year. I truly enjoy wandering, but I’m happy to have found a base I can return to each year, and save up for more adventures to come.”

New York native Theresa Conti made the leap across the ocean, uprooting herself and moving to Trieste, Italy, at age 64, as a solo traveler.

Theresa’s roots played a big part in her decision. Three of her grandparents were from southern Italy and her search for her family’s heritage brought her to Italy for the first time. After four trips to scout locations and find the place that “most felt like home,” Theresa settled on Trieste.

Theresa says “My vision was to live close to both the sea and mountains, in a walkable city that was safe, clean and quiet, with outdoors activities and an active life, and Trieste has it all. I’m a firm believer that when we follow our dreams, we naturally experience greater health, happiness, and fulfilment.”

The savings you can enjoy by housesitting allow you to stay in different parts of the world for far longer than a traditional vacation. One couple who are doing just that are Alan and Ros Cuthbertson who live in Chiang Mai. They explain “We lead two very different lifestyles. Most of the year we live in the vibrant city of Chiang Mai, in northern Thailand. But as the northern hemisphere warms up, we head to Europe to start our housesitting assignments. We have had many unforgettable experiences. Housesitting has changed our life; not only have we been to some incredible places, but we’ve also experienced living like a local. The homeowners are our new friends, and we always get so much pleasure out of seeing “our” pets again.”

“As much as we love our life in Chiang Mai, we have always wanted to travel the world—and housesitting means we can achieve our dream.

Denise Baxendell says turning 50 was a turning point for her and her husband, Stuart. Seeing friends and family getting older, some of them suffering from illness, she realized that it was time to do all those “rainy day’” things they had always talked about.

So, Denise and Stuart bought a 34-foot RV in the U.K. to travel across Europe. Denise says “Besides being able to absorb local culture, eat the delicious food, and take an extended vacation, the best thing about our adventure was meeting interesting people of all ages and nationalities. We drank wine with sommeliers, had conversations in French with Italian art experts and shared our barbecue with a newly engaged couple from New Zealand.”

Bill Dejardin and Judy Lutz, moved to Placenica, Belize from the Pacific Northwest in 2012, to make the most of Belize’s year-round, summertime weather. Bill says “Living in Belize: sunshine almost every single day, highs can range from the mid-90s F to an occasional 70 F, which doesn’t happen often. Blue sky versus gray sky…I’ll take blue sky. Even when we have those tropical storms, they can roll in for an hour or less, then we break out into sunshine. I much prefer the weather here.”

Besides the great weather, low costs, and great social scene, the couple enjoy the fact that Belize is English speaking, and they take the American dollar.

Paul Murray Elliott and his wife Wendy were in their mid-50s, when they started to crave a more exotic, cosmopolitan alternative to the small college-town life they were livimg in Bloomington, Indiana.

Paul explains “We settled on France as a destination for part-time living, and we decided to discover whether Nice provided what it would take to keep us coming back for the foreseeable future. It does. The almost-guaranteed fine weather means we’re outside most of the time in all seasons. Walking the steep, wild herb- and flower-covered slopes is both a feast for the eyes and good exercise for the heart. At home in Bloomington, I use a gym, because the weather is often either too hot or too cold to exercise outdoors.”

Vadim Ponorovsky retired at 50 and has been traveling non-stop. He has been to Mexico, Costa Rica, Italy, Spain, France, Japan, Thailand, and Vietnam, immersing himself in new cultures and making new friends. Vadim always loved traveling, but after a successful career owning French restaurants in New York, he is enjoying a more relaxing lifestyle traveling 12 months a year. By sticking to a monthly budget of around $3,000 and alternating expensive countries with budget-friendly ones, Vadim is abe to see much of the world. Vadim prefers slow travel, staying as long as his tourist visas allow.

Vadim says “I can stay in a European country with a tourist visa for 90 days, six months in Mexico. When I get there, I am not interested in going to the museums but in experiencing life and understanding how people live on a day-to-day basis.”