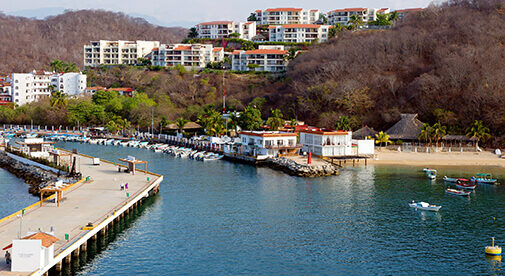 Huatulco itself may have been built for tourism. But the state it’s in, Oaxaca, is known as a center of traditional culture, unique to the region. ©User10095428_393/iStock

For some time, I’ve been captivated by images I’ve seen on Instagram of empty golden-sand beaches on little cliff-lined bays…the views you get from homes and condos perched on steep hillsides overlooking the glittering Pacific…in a low-key Mexican beach community called Huatulco.

That’s saying a lot considering where my winter base is…

My point is Pacific views would need to be seriously impressive to wow me. And the ones I see from Huatulco sure do. As do some of the homes and condos. Not pocket money…but closer to zero than to California prices

I haven’t been to Huatulco, a little beach community on Mexico’s southern Pacific coast, yet. But it’s definitely on my list. Now, more so than ever, after the reports I’ve been getting back from my scout, Jason Holland, who’s on the ground there as we speak.

As you’ll see below in Jason’s dispatch, Huatulco’s stunningly beautiful coastline is just one element that makes this low-key community an ideal vacation getaway, expat favorite, snowbird haven…and potential venue for owning real estate, whether as a second home, investment property, or both.

For centuries the Mixtec people of Oaxaca have come each year from October to March to the rocky, cliff-lined bays of Huatulco, on the far southern Pacific coast of Mexico, to collect Purpura pansa, a type of sea snail which provides a vivid purple dye they use in traditional garments that are said to have spiritual and magical qualities.

They extract the dye and then release the still-alive snail back to the sea. After a period of overharvesting in the 1980s by commercial interests, the Mexican government decreed the Mixtecs were the only ones allowed to do so and a limited amount at that. And this unique cultural tradition has been preserved to this day.

It’s quite a standout in a community where everything feels new. And, it actually is. Huatulco has been master-planned for tourism starting in the 1980s by FONATUR, Mexico’s tourism authority, which guides development to this day.

Like in better-known Cancún, FONATUR decided Huatulco would make a great place to bring visitors and much-needed tourism dollars, and, as a result, brought in roads and other infrastructure, as well as an international airport, to make it happen.

But unlike Cancún, where what was essentially a large coconut plantation on a sandy barrier island was turned into the Hotel Zone with endless rows of all-inclusive resorts, Huatulco was planned to be more low-key and sustainable, with environmentally friendly practices, as well as low-density development that melds with the surrounding coastal landscape.

No buildings over four stories are allowed, for example, and each new development must leave aside significant green space. And wastewater is treated and then used for irrigation.

There are only a few large resorts, like the Barcelo and Camino Real, located in the Tangolunda area. You mostly have villas and condo communities dotting the hills, with some clusters of hotels on the flat land near the beaches. This style of development is not overwhelming and works well with the rocky coastline.

So perhaps those folks collecting snails in a sustainable way fit right in.

This stretch of Pacific coast is starkly beautiful, with steep hills rising sharply from the water, giving many residents perched in those villas and condos on the slopes panoramic views.

There are nine bays and 36 beaches in Huatulco, a region which stretches from Huatulco National Park (undeveloped, although you can visit remote beaches here) to the Copalita River about eight miles and 20 minutes’ drive east. Some bays are quite small, rocky and wavy and not great for swimming. Others are quite wide, with golden-sand beaches and calm waters. You can snorkel in several.

Much of the development is clustered around these bays, including three major population centers which are within a few minutes’ drive of each other, with neighborhoods in and around them, as well as further up and down the coast. Many people ride a scooter. Depending on where you’re going, walking or riding your bike can be an easy option too.

La Crucecita is the main “town.” It’s where you have a well-landscaped main plaza in the center, with restaurants, shops, and souvenir stands on its edges. You can find taco carts, little hole-in-the-wall produce stands, folks selling fresh-catch fish on ice…it’s a typical Mexican town in many ways. On the outskirts, you have major supermarkets, medical clinics, auto parts stores—if you live there, you can get anything you might need.

In Santa Cruz you’ll find a few large hotels, as well as condo communities, right on a bay. The beach is popular, with seafood restaurants setting up rows of tables right on the sand. The water is pleasant and swimmable.

There is a marina, where visitors go out on boats offering tours of the bays and snorkeling. Fishing is popular here too, with dorado (mahi mahi) and marlin abundant in the waters offshore. You can hire a large boat with cabin and such or a more simple open boat called a lancha or panga. There is also a cruise ship port, which hosted about 40 ships per year pre-pandemic.

Chahué has its own marina, a quiet residential area, with a few restaurants on the water, including some of Huatulco’s fine dining options. The beach is Blue Flag, which means it’s been certified internationally for good ecological practices.

Huatulco is a place made for vacation. The purpose-built, well-thought-out infrastructure lends itself to an easy, no-stress visit.

The road network here is truly standout. As part of FONATUR’s masterplan, roads are extensive, well-kept, and organized. Many have two lanes going each way, with a grassy median in between. Turn lanes. Traffic circles. Traffic lights. Good signage. It makes getting around easy, which in my experience in Mexico and Latin America isn’t all that common in beach towns. In my time here, I’ve seen workers out repairing roads and maintaining landscaping every day.

And this network extends up and down the coast, branching off to existing developments or lying in wait for what’s to come. It’s refreshing to be in a place where infrastructure was not an afterthought.

There are also well-kept public parks everywhere. Plenty of free public beach parking. Pavilions and rest rooms by the beach, with commercial space with shops, cafes, and restaurants. Even lifeguards. Again, not so common in much of Latin America.

And aside from going to the beach, there is plenty to do. There’s a well-regarded 18-hole golf course that local golfers tell me is quite good, yet never busy. There are the boat tours and fishing tours. Spas and massages. Mountain biking, hiking to waterfalls in the national park and white-water rafting, which all fits into the whole eco-aspect.

Huatulco is a popular destination for Mexicans from around the country; families, groups of friends, couples young and old. There are several direct flights a day from Mexico City—it’s just an hour and round-trip tickets are $100 or less—as well as some of Mexico’s other large cities. It’s a doable trip for a long weekend even. A new highway from Oaxaca, the state capital, to this coast, planned for completion next year, could also bring more locals to Huatulco by road.

There are plenty of foreigners as well. Traditionally, a majority have been Canadian. Most of the expats and visitors I’ve chatted with are from there. And still most of the direct international flights are from destinations in Canada.

But local contacts I’ve been chatting with during my stay say more Americans have been coming. Direct flights from Chicago and Dallas are starting in December and January, respectively. Otherwise, you have to connect through Mexico City—which does make access more difficult than some other beaches in Mexico.

Apparently, many Californians are coming down via the Cross Border Xpress, which lets them walk across the border in southern California directly into the Tijuana airport, which has direct flights to Huatulco daily.

There are vacationers coming for a week…two weeks. But many, especially those Canadians, escape chilly weather and stay for much if not all of winter. Now, in late November, this high season is just picking up.

Some come every year, which has compelled some to buy a second home to use when they’re in town and rent out when they’re not.

There is limited development here, by design. And that has had an impact on real estate prices. Two-bedroom luxury condos with ocean views, walk to beach, in the best areas, you’re looking at $400,000+. Go a bit further afield, and it’s $300,000+. But sacrifice a view, and you can find condos for under $200,000. Ocean-view villas are around $1 million.

Tomorrow, I’ll highlight more of Huatulco’s standout listings I checked out on this trip, including a penthouse condo with killer views, walking distance to one of the region’s best beaches and a top-rated restaurant.

But for now…enjoy the views from one condo I toured with the Bayside team in a recently delivered community called Sotavento. All the condos have views like this of what is essentially a private little bay.

Huatulco itself may have been built for tourism. But the state it’s in, Oaxaca, is known as a center of traditional culture, unique to the region.

Mexico is not a monolith. It’s about three times the size of Texas and has a wide variety of customs and cultures—there can be a different style of food, arts and crafts, dress, and more from region to region. The influence of the indigenous people is strong in this state, albeit a bit blunted in the tourist area of Huatulco.

Still, local restaurants proudly offer the tlayuda, which is a fried or toasted tortilla covered in refried beans, cheese, lettuce or cabbage, and some sort of meat (even grasshoppers, if you like), as well as dishes served with several varieties of mole, a rich sauce made from chiles, herbs, and spices. Souvenir shops emphasize brightly colored local textiles, as well as black clay pottery.

My favorite local traditional craft is probably mezcal. It’s similar to tequila, which to be considered authentic must be made from the blue agave plant. However, mezcal can be made from any species of agave but the heart of the plant must be roasted in a fire pit before being distilled.

You savor mezcal, one sip at a time. There are many varieties…mezcal tastings are popular here. Even craft cocktails made with it. Although I was tempted to buy some cheap from the fellow in the cowboy hat who offered me a bottle of homebrew on a street corner…

Huatulco may not get the attention of the Riviera Maya…Puerto Vallarta…or Los Cabos…and access may be more difficult—but I think it’s well worth a visit for comfortable infrastructure, laid-back vibe, the warm weather year-round, the stunning beaches, and all the fun things to do…

Escaping the Crowds in Magical Huatulco