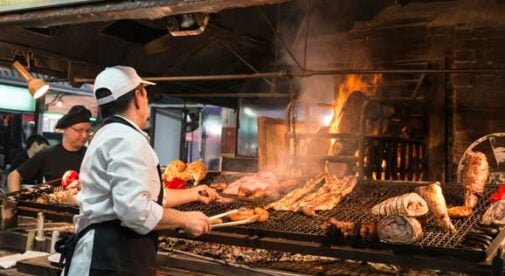 Uruguay is a food rich country—both in terms of its plentiful food supply and its tasty cuisine.

Eighty percent of Uruguay’s land area is used for agriculture. It includes vast ranches of cows and sheep, poultry farms, and dairies. Crops grown in Uruguay include rice and other grains, a variety of vegetables, and fruit ranging from pears to tangerines.

And because Uruguay is a small country (about the size of Washington state), it’s a short trip from the farm or dock to the table. In Montevideo, Uruguay’s capital, street markets set up in every neighborhood a couple of mornings per week selling fresh produce, chicken, fish, and artisan cheeses.

Like much of Latin America, Uruguay’s cuisine includes Spanish dishes. But, as you will see, the greatest influence on Uruguay’s culinary traditions came across the Atlantic with waves of Italian immigrants from the 1830s through the 1920s.

As a food-loving expat living in Uruguay the last 14 years, I’ve gone deep in my exploration of Uruguay’s food offerings. So, you can trust this post is backed up by plenty of first-hand research.

While there is no end to what can be written about the cuisine of Uruguay, the purpose of this post is to introduce you to 30 long-standing favorite foods of Uruguay.

In Uruguay, barbecuing over wood coals is a centuries-old tradition going back to the early gauchos that is still popular today.

An asado is a gathering of family and friends for a barbecue. The word parilla means grill. It can refer to the actual cooking grill or a barbecue restaurant with a grill.

Barbecue grills in Uruguay are usually large (to cook for a lot of people) and set at an angle over the wood coals. The grill’s angle allows you to control the cooking temperature by placing food closer to or further from the hot coals below.

The main attraction at most asados are cuts of beef. One favorite cut is asado de tira, a rib strip roast. Besides meat, an asado may include grilling beef chinchulín (small intestines) and molleja (gizzards).

Most asados include chicken. Chickens are quartered (two breasts and two thighs and legs) before going on the grill. A hot brick is often placed on top of the grilling chicken quarter for more even heat.

After beef, the most popular asado food is sausage. The most common type is chorizo, a pork sausage. Many also like morcilla—a blood sausage. Morcilla sausages come in two varieties: sweet or savory.

Many parrilla menus offer a “parrilla para dos” (a grill for two). It’s a large platter with a variety of beef cuts, sausages, and chicken. It allows you to sample a little bit of everything. The platter is often set on a tray of hot coals at your table, to keep it all warm.

Side note: Vegetarianism in Uruguay

While its true Uruguayans eat more beef per capita than any other country, you can also find a significant vegetarian community in Uruguay.  Among the many restaurants in Montevideo are vegetarian places. And most restaurant menus include vegetarian options.

Barbecued provolone cheese is a popular barbecue appetizer, which can be grilled in two ways. One is simply grilling a round of mild provolone cheese. (Rounds of provolone cheese for grilling are four to five inches across and half-an-inch thick.) The round of cheese stays on the grill until it gets hot and soft. Then, it’s divided into gooey portions for each person at the table. Some sprinkle the cooked cheese with oregano and red pepper flakes.

Another way to cook provolone cheese over a barbecue is with a ceramic tray that looks like a miniature ceramic muffin tin. Bite-sized pieces of cheese melt into the tray’s little cups. The ceramic tray doubles as the serving dish.

Chimichurri is a popular meat sauce. It’s made from finely chopped parsley, oregano, and garlic in olive oil with a little vinegar and pepper. While it’s officially a meat sauce, many put it on their bread, too.

Asados usually include a simple lettuce and tomato salad that may also include grated carrots and/or onions. The salad is dressed with olive oil, vinegar, and salt.

Bread, such as a sliced baguette or a basket of rolls, is also served.

In Uruguay, a “pizza” is pizza crust and sauce (but no cheese).

A “muzzarella” is a pizza and sauce with melted mozzarella cheese on top.

Some pizza places offer muzzarellas with a set topping. For example, a “Margherita” with cheese, tomatoes, basil, and garlic.

Most pizza places also serve fainá. Fainá is like a pizza crust, except made with chickpea flour. Fainá is often served without a sauce, cheese, or toppings.

Pasta dishes such as fettuccine, tortellini, and ravioli are very popular in Uruguay. Ravioli is available with a variety of fillings. My personal favorite is squash-filled ravioli.

A common topping for ñoquis is salsa tuco, a red meat and vegetable sauce.

Chivito, which literally means “goat”, is also the name of Uruguay’s most famous sandwich. It consists of a slice of roast beef, Canadian bacon, mozzarella cheese, and a fried egg served on a bun. It may also include lettuce, tomatoes, peppers, olives onions, and mayonnaise. A chivito is often accompanied with french fries.

The chivito sandwich was born in the 1940s at El Mejillón restaurant in Punta del Este, Uruguay. It’s said a woman from Argentina went into El Mejillón and asked for chivito, meaning goat meat. (While goat is eaten in some regions of Argentina, it’s less common in Uruguay.)

The owner of the restaurant, Antonio Carbonaro, explained he didn’t have goat, but he’d fix her up with something good. Improvising, he made a sandwich with a thin beef filet, ham, cheese, and garnishes. He then served it to her, calling it a chivito.

The sandwich became a hit, and it’s said Carbonaro went on to sell 1,000 chivitos a day.

An alternative to a chivito sandwich is a chivito al plato. It includes all the ingredients except instead of a bun, it’s served on a bed of “ensalada rusa” (see description below) on a plate. So, you can enjoy the same flavors using a knife and fork.

Ensalada rusa was created by Lucien Olivier, a Belgian chef of French origin, at the Hermitage Restaurant in Moscow in the 1860s. The original salad (called Olivier salad) contained expensive ingredients, such as partridge meat and caviar. When the Soviet Union was formed, people started making the salad with more humble ingredients, similar to how it’s made today.

(In the Spanish-speaking world, ensalada rusa is popular in Spain, Mexico, and South America’s Southern Cone.)

Empanadas are a type of turnover. They’re made from pastry dough cut into round shapes about five inches across. The round pieces of dough are folded over a filling. The edges are pinched together before they’re either baked or fried.

Choripán is a barbecued chorizo sausage in a sliced roll. It is often served with chimichurri sauce.

Side note: Fine cheeses made in Uruguay

In the 1860s, a large migration of Swiss came to Uruguay, bringing their cheese-making traditions with them. Today, much of the cheese sold in Uruguay is made by large commercial dairies. However, you can still get hand-crafted cheeses made in small batches at street markets and specialty cheese shops.

A pancho is a beef and pork frankfurter (like a hot dog). It’s served in a bun with mustard and other condiments. Panchos come in two sizes: regular and extra-long (sticking out both sides of the bun). They’re often sold from street carts.

Other popular sándwiches de miga include:

Sándwiches de miga triples (triple) are made in two layers with three slices of bread.

Pamplona is a stuffed meat dish. It’s a thick slice of chicken or pork rolled with bacon, ham, and cooked bell pepper around a mozzarella stick. It’s then wrapped in aluminum foil and baked. After it’s cooked, the meat roll is cut into slices. It’s often served with chimichurri sauce.

Milanesas are breaded slices of beef or chicken, which can be baked or fried. Popular milanesas in Uruguay include:

Revuelto gramajo (scrambled gramajo) is a dish made with fried French-cut potatoes, fried bacon, sautéed onions, and chopped ham. The ingredients are scrambled with an egg mix. It’s often spiced with pepper and parsley.

While this post focuses on interesting Uruguayan dishes, it should be noted that Uruguayans also eat many simple whole foods, like beans, lentils, rice, and oatmeal, as well as baked or steamed vegetables. Popular whole food snacks in Uruguay include a broad selection of nuts and cheeses, fruit, and olives.

Polenta is boiled cornmeal that can be made into a porridge or baked. In Uruguay, the porridge is often topped with tuco sauce. The baked version is made in two layers with ham and cheese in the middle.

Tortas fritas (fried cakes) are a round, flat fried biscuit sprinkled with sugar. Inexpensive, warm, and filling, they are often sold from street carts on winter evenings.

Medialunas are like croissants, which you can buy glazed or plain. Glazed medialunas and coffee is a popular morning meal. Plain medialunas can be sliced in two and eaten with butter and jam. They are also used to make ham and cheese sandwiches for an afternoon snack.

Flan is a baked custard dessert. In Uruguay, it’s often served with a few dabs of dulce de leche.

What’s the favorite sweet flavor of Uruguay? It’s dulce de leche—a thick, sweet sauce made from caramelized milk. It’s used as a spread, a filling for sweet empanadas, and as a flavoring for ice cream, cakes, and other desserts.

Churros are a dessert pastry. They’re made by squeezing dough through a churro dispenser (like a heavy-duty frosting bag or cookie press). The churro dispenser produces a long star-shaped pastry that is fried in oil. Churros can be dusted in sugar or spread with dulce de leche.

A Martín Fierro is a country-style dessert. It consists of a slice of cheese with an equal-sized slice of quince paste on top. The dessert’s namesake (Martín Fierro) is the protagonist in a guacho poem written in 1872 by José Hernández.

Pastafrola Uruguaya is a quince paste-filled pie. It’s covered with crisscrossed strips of dough and then baked.

Chajá is the name of a large duck. It’s also the name of a Uruguayan frozen dessert that contains peaches, cream, cake, and meringue. The Chajá was invented in 1927 by Orlando Castellano, the owner of a confectionery in Paysandú, a city in eastern Uruguay. However, today the Chajá is popular all over the country.

Yerba Mate is a tea-like herb made into an infusion that’s drunk from a hollow gourd (called a mate) using a metal straw (called a bombilla). While people throughout the region drink Yerba mate, Uruguayans drink more per capita than any other country.

For many Uruguayans, agua con gas (sparkling water) is a popular alternative to soft drinks.