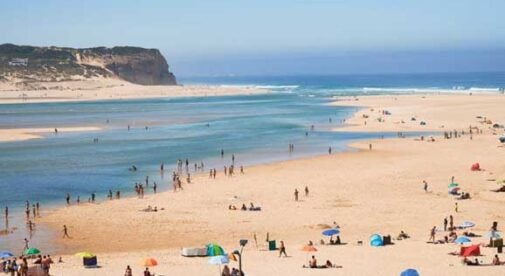 In the tiny Portuguese village of Valado de Santa Quitéria the early morning silence is broken by the sound of honking as a small white van comes to a stop along the roadside.

Villagers emerge from their homes sleepily, some still dressed in bathrobes.

The back of the van opens to a sweet, fragrant assortment of freshly-baked breads and pastries. Pequeno-almoço (breakfast) has just become a bit more delightful.

Neighbors smile and exchange bom dias before heading back into their homes to savor the luscious goodies.

Susan Serna, an American expat, is among the shoppers who reap the rewards of this sweet daily door-to-door service.

Susan, 60, and her husband, Tom Englehart, 71, have immersed themselves in the culture of Portugal’s Silver Coast for over three years now. But Susan and Tom are no strangers to expat life since Portugal is not where their expat story begins.

Originally from Milwaukee, Wisconsin, Susan worked in the healthcare industry before giving it up to pursue her artistic dreams as a metalsmith and photographer. Of Mexican descent, Susan’s parents were expats long before moving abroad was mainstream.

“Although my parents spoke fluent Spanish, they never taught it to us kids,” says Susan. “In fact, the only time we heard them speak Spanish was to complain about us!”

But when the family relocated to Puerto Rico, Susan was forced to learn Spanish, a skill that she would later come to appreciate. Moving abroad as a kid also sparked a lifelong wanderlust.

Tom grew up in Akron, Ohio, and earned a living in the behavioural health field which landed them both in Anchorage, Alaska before packing it in to enjoy life. But like so many others, the thought of being able to retire with the high cost of U.S. healthcare, seemed impossible.

“Some friends of ours from Ohio moved to Cuenca, Ecuador,” says Susan. “We went to visit and were smitten.”

So, in 2016 they packed their suitcases and three cats and moved to Cuenca to start the next chapter of their lives.

“We rented a huge, three-story house for just $600 a month,” Susan says. “We didn’t need that much house but since it was so cheap, we went for it.”

“Each of the three cats had their own room,” adds Tom. “But after a while we felt we had seen all there was to see and longed for a change in climate and to have four seasons again.”

“I have absolutely no regrets about our two years in Ecuador,” says Susan. “We had some wonderful times and made some great friends.”

Dipping their toes in the expat waters had taught Susan and Tom what they longed for in life abroad and they set their sights on Europe.

“I really wanted to live in Spain,” says Susan, “and since I spoke fluent Spanish it seemed like a good option.”

They planned a scouting trip to Spain and Portugal but fell head-over-heels with the smaller of the two countries.

“Portugal just seemed like the perfect fit,” says Susan. “It spoke to us. The beaches and landscapes are gorgeous. Infrastructure is great, there is so much to see and do, and the people are wonderful.”

In 2018, Tom and Susan made the move to the Silver Coast, one-hour north of Lisbon, where they found their dream home. With four-bedrooms, two full baths, a large plot of land with a swimming pool, fruit trees, and plenty of space for the cats to roam, the two were in heaven.

“Buying a house here is so different then in the U.S.,” says Susan. “We stood around with a group of realtors, expressed an interest in the property, made an offer, shook hands, and then went to lunch.”

Their rural home is nestled among forested land but only a short drive from Caldas da Rainha, a mid-sized city with modern shopping, hospitals, clinics, a cobbled old-town, and sizeable expat community.

When some fun in the sun beckons, they simply head to one of many coastal havens close by. Foz do Arelho and Nadadouro offer an inviting lagoon with shallow water, golden sand and a bustling nightlife. Or they can head to one of the trails that encircle the coastline to enjoy hiking or cycling with friends.

Knowing Spanish has helped Susan and Tom learn Portuguese and knowing Portuguese has helped them become immersed in village life and make friends with their neighbors.

“We love our neighbors,” says Susan. “Most of them speak no English but we manage to communicate. Not knowing the language should never deter someone from moving abroad, there are always gestures and other ways to communicate. One of our neighbours makes her own ginjinha (a Portuguese liqueur) and keeps us well supplied.”

The couple live nicely on a budget of $2,000 to $2,500 a month, eating out occasionally and stocking up on fish, produce, and dairy products from local markets.

“We love the slower pace of life, the people, food, and weather,” says Susan. “Anyone who is thinking about moving abroad should just do it, don’t wait.”