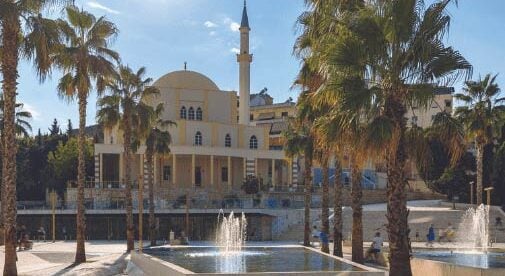 Echoes of Durrës past are scattered all around this pleasant European city. ©FANI KURTI/iStock

Albania. Not the first place you’d think of for a European vacation. I certainly didn’t…and I bet that most people outside of Europe would be challenged to identify this country on a map. Nestled to the north of Greece, south of Montenegro and Croatia, and across the Adriatic Sea from Italy, the cultural influences of these popular countries are evident. When you’re here, it’s easy to see why they call it the affordable alternative to Italy, with its lovely coastline, abundant seafood, charming cafes, and mountainous terrain in the distance.

So, how did I end up here? It was an unexpected detour…

My husband and I have been “living the dream” in the small, but popular beach town of Tamarindo, Costa Rica since 2013. Our plan had always been to spend most of our time at our seaside home there and several months traveling each spring and fall. But the pandemic had a way of unsettling us, making us want to partially settle elsewhere too.

Malta, the southern EU island nation in the Mediterranean, had been on our radar for a while, even pre-pandemic. The lure of mild weather, English as an official language, surrounded by sea and history, and the possibility of EU residency by investment was a big draw for us.

For nearly everyone on earth, 2020- 21 plans were delayed, rebooked, or just canceled. Our three-month exploration plan for Malta (with a few side trips) crashed and burned into a fiery mess in March 2020. Rebooked to 2021 we experienced more of the same. While EU tourists were enjoying the glorious wonders of their Euro neighbors, our less-than-powerful U.S. passports kept us locked out again.

Steadfast and determined, I booked #Malta2022. And this time it wasn’t the U.S. passport that was the root of our angst, it was residing in Costa Rica—at the time, a dark red listed country by the Maltese government due to Costa Rica’s COVID numbers. And so, in order to legitimately enter Malta, we had to pivot and find a red-listed country in which to “quarantine”. After researching countries that would allow entry from Costa Rica with a U.S. passport and some place I had never been to, we detoured to Albania.

This is a country with a turbulent and colorful past. Over the centuries Albanian culture has been primarily influenced by the Romans, Greeks, Turks, and Italians. The first inhabitants of Albania were Illyrians tribes, a group of Indo-European people who also occupied the Balkan Peninsula consisting of present-day Montenegro, Croatia, Kosovo, Bosnia, and Herze[1]govina. They were strong seafaring people with a reputation for piracy.

Given its tactical location on the Adriatic Sea across from southern Italy, Albania has long been a coveted foothold for numerous empires seeking to further expand their kingdoms. In the 2nd century B.C., the Illyrians were conquered by the Romans, and from the end of the 4th century they were ruled by the Byzantine Empire. Following years of devastating invasions by Visigoths, Huns, Bulgarians, and Slavs, the Albanians were eventually conquered by Turkey’s Ottoman Empire in the 15th century. Albania declared inde[1]pendence in 1912, after nearly five centuries of Ottoman rule.

Albania’s largest coastal city, Durrës, is located just 24 miles from the capital city of Tirana (home to the country’s only international airport). The airport’s proximity to Durrës helped us in choosing this quarantine spot (as well as its mild weather). Knowing we would be brain dead with jetlag for several days, why make a 30+ hour travel day even longer? The drive from the airport takes about 35 minutes on modern paved roads.

Durrës is a cross between a larger city with a small beach town atmosphere, with an approximate population of 175,000. Although, the summertime population swells due to its popular beaches and seaside activities.

Durrës turned out to be a wonderful quarantine vacation spot for foodies and history buffs like us. Here are just some of my highlights… 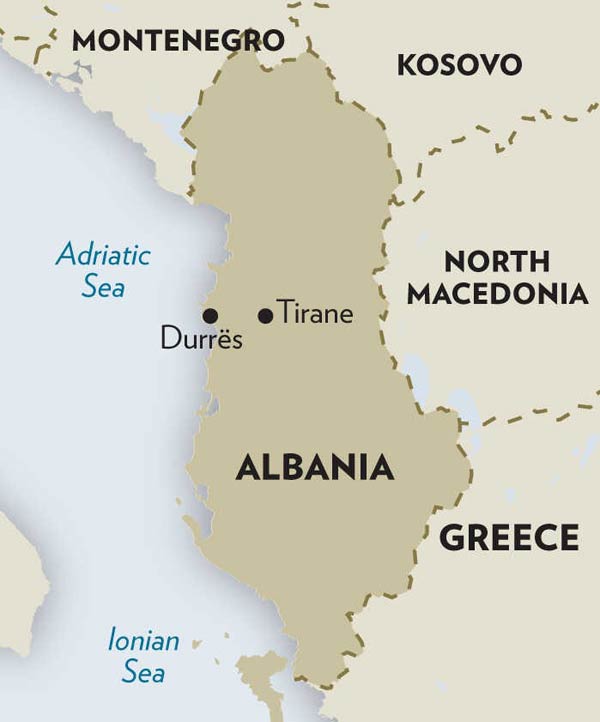 Flat at sea level and hilly on the periphery, the city of Durrës is walkable to most of the major attractions, shopping, restaurants, and the beaches. Our first stop to get the lay of the land was a stroll along the touristy, but enchanting, Vollga Promenade beside the Adriatic Sea. Occupying a great length of the seafront with shops, trendy restaurants and kiddie rides, this area comes alive just before sunset.

In Albania, the traditional midday meal is the country’s main meal. It comprises of vegetable and meat/fish main dish, which is followed by a fresh vegetable salad. The country’s cuisine is heavily influenced by Italy and Greece. So, it is easy to find restaurants (200 in Durrës alone) featur[1]ing colorful Greek salads, pastas, pizzas, and mouth-watering fresh seafood. And the best part is that the prices here are significantly less than other European tourist towns. Albania is considered one of the most affordable places in Europe to visit. In doing some price comparisons I found that most restaurant (and accommoda[1]tion) bills were half as much—sometimes three times cheaper—than the bill in the U.S. With such great food and value, we opted to dine out more than we used our Airbnb kitchen.

You may not realize it, but Albania is one of the European countries with a long history of growing grapes, dating back to the Bronze Age. The most common varieties of indigenous Albanian grapes are Kallmeti, Shesh, Debin, Vranac, and Vlosh. There are no wineries in Durrës city limits, but you can easily take a day trip to several nearby vineyards, such as Kokomani Winery and Duka Vineyard (see: kantinaduka.al) for tastings. Although not well-known on the world stage, I would say Albanian wines are underrated.

There is much more to do than promenade walks and wine tastings here though. Durrës is rich in ancient history, as evidenced by the formidable Roman walls we wandered by daily…still intact in the central part of the city. The Durrës Roman Amphitheater, built in the beginning of the second century, is the largest of its kind in the Balkans and could house 20,000 spectators for the gladiator fights. We strolled a further 10 minutes through town to find the lesser-preserved old Roman baths and forum.

The country’s largest archaeological museum is located in Durrës on the main boulevard across from the beach. Housing over 3,200 Greek, Hellenistic, Roman, and Byzantine artifacts, it gives a sense of how much foreign influence Durrës had received during each period. I downloaded the free audio tour app in English for a thorough immersion of history. I could have spent several hours there, but my hus[1]band was eager to get on with beer tastings (his beer tip: try a local Korça or Tirana).

This seaside city was also home to the sum[1]mer residence of His Royal Highness, King Zog, during Albania’s brief modern-day monarchy (this only lasted from 1928 until 1939). Albania had a royal family, The House of Zogu, from the. The family produced the first president and the short-lived modern Albanian Kingdom with its only monarch, King Zog, who was partially recognized as king until 1948.

He built a summer residence just outside of Durrës. Perched on a hill, the short 25-minute hike from sea level was fairly easy and gives spectacular lookout points of the city and the Adriatic Sea below. The villa itself is currently closed, but nonetheless, the hike to higher ground is worth the breathtaking views.

5 Things To Know About Albania

1. Albania’s national drink is raki: It’s an anise flavored that’s usually made from fermented grapes or plums, though some versions are made from berries. It’s similar in taste to Greek ouzo. Raki is traditionally used as a toasting drink, to celebrate an occasion or welcome a guest…so it can be difficult to avoid if you’re visiting the country. It’s also often served as an aperitif, and it’s perfectly acceptable to drink it in the morning before breakfast.

2. Yes is no and no is yes: When an Albanian agrees with you…they’ll shake their head (as in, from side to side). When they disagree, they’ll nod. One of the theories behind this quirky trait dates back to Ottoman rule, when locals were told to switch from Christianity to Islam and if they didn’t they were often killed. Legend has it locals switched the signals so when they were asked if they wanted to convert, they nodded their heads…but really, they were saying no.

3. Albania’s most famous citizen: Her name was Anjezë Gonxhe Bojaxhiu. But she is better known as Mother Teresa. She was born in Skopje in 1910, which, back then, was part of Albania (Skopje became part of Macedonia in 1913). She is also the only Albanian to win a Nobel prize.

4. No Golden Arches here: Albania is one of just two European countries not to have a McDonald’s (Vatican City is the other). The country does have a kind of “bootleg” fast food franchise called Kolonat that’s very similar. The branding is the familiar red and yellow and even the lettering on the signage looks suspiciously like its more famous competitor.

5. King Zog had 55 lives:King Zog survived 55 assassination attempts in his time as monarch of Albania. With that many people out to kill him, it’s no surprise that he became paranoid and only surrounded himself with loyal guards who were family members or part of his close inner circle. He died peacefully, in bed, in 1961 at the age of 65.

Valbona Valley, Albanian Alps: One of Europe’s Most Beautiful Hikes