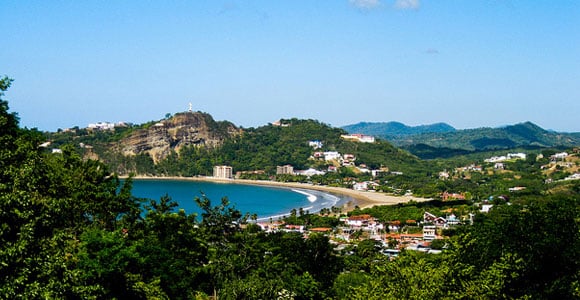 There is a wealth of amazing sites and activities awaiting those who come to travel in Nicaragua. This Latin American gem, which is slightly smaller than the state of New York, is the largest country in Central America and boasts a wonderfully diverse landscape dotted with volcanoes and freshwater lakes. Nicaragua is flanked on its sides by the warm, blue Caribbean waters to the east and the striking Pacific-washed cliffs to the west.

Here’s a quick snapshot of the places we think you should see:

Our Favorite Quiet, Lakeside Retreat to Visit When You Travel in Nicaragua

If you’re near Laguna Apoyo–about 25 minutes from Managua–don’t miss the Norome, the area along the shore at the water’s edge, where you can find quaint beach restaurants, public beaches, and fancy resorts. Swim in the warm, supposedly medicinal, waters of the lake and you’re sure to have a fabulous day.

Go up the hill to locate large villas and hotels where you can find a room with a lake view. You can wander down to the dock and swim, canoe, and kayak, or get a guide and go for a hike to see monkeys and birds.

Traveling around The Pacific Coast

For a taste of Pacific coast living, head to the beach town of San Juan del Sur. This little community, long a vacation retreat for Nicaraguans, sits on a long, lovely beach set in a protected cove.

San Juan del Sur is a funky, colorful, musical town with a little bit of something for everyone. With over 50 restaurants in a three-square-block area, the city offers Nicaraguan, Mediterranean, Italian, Spanish, Chinese, Japanese, Indian and other fare. It even has a raw food restaurant and a craft-beer brewery. Surrounded by 22 separate beaches on a 30-mile stretch of coast, you can spend the day in the ocean without seeing another soul, or join the tourist crowd and have fun surfing, eating at seaside restaurants and drinking the local Toña beer or Flor de Caña rum. Satisfy your music tastes with live jazz, rock, reggae, oldies, salsa, and Nicaraguan folk music.

There are many economical places to stay in San Juan del Sur, whether they are family-run hostels or small hotels. Some run as low as $20 a night for a double room with private bath. Accommodations also include 4-star resorts, if you are so inclined. Activities include deep sea fishing, first-class surfing, swimming, horseback riding, and much, much more. Visit La Flor beach, south of San Juan del Sur to see thousands of huge sea turtles come up on the beach and lay their eggs. Take a canopy ride through the forest. Indulge yourself one day at any of the various spas. Take yoga lessons or go to the gym.

White Sand Beaches and Turquoise Water on the Caribbean

Nicaragua also has its Caribbean side. Picture postcard perfect, the Corn Islands lure tourists from all over the world with their coconut palms, easy living style, crystal-clear waters and happy welcoming locals. Little Corn Island is where most of the tourists go; there’s no traffic on this island and you can walk around the entire island in about an hour. Activities include snorkeling, fishing, listening to music in the bars and just lazing away the day. Restaurants, hotels and huts sit right on the beach to give you the best service with a view. Prices for a dinner for two of fish in coconut sauce or the famous rondon (a local fish and vegetable stew made with coconut milk) run about $15. Accommodations are about $30 and up. Or go to Big Corn Island, grab a taxi and circle the island, taking time to jump in the ocean each time you see a beautiful spot. Prices for food and hotels are about the same as Little Corn.

León once served as the country’s political, military, cultural, and religious center. It is said that the only reason that Managua was made the capital was because of it sits between the very liberal León and the very conservative Granada. León is still the intellectual capital of the country today and you’ll find wonderful museums and lively cafés.

The metropolitan cathedral is considered the most significant colonial structure in all of Central America; many prominent Nicaraguans, including Ruben Dario, are buried inside its walls. Old León was destroyed by an earthquake in 1609 and is still being excavated today.

The provinces of Jinotega and Matagalpa in the highlands of central Nicaragua offer lush rainforests…and bird life, ferns, and orchids thrive here. More than 3,000 feet above sea level, this is the coolest part of the country, and its rivers and lakes offer excellent fishing.

The northern town of Esteli, surrounded by hills and plateaus, is home to painted stones and archeological relics from pre-Colombian times, as well as a huge cave and waterfall.

Look on any map of Nicaragua, and you’ll immediately notice Lake Nicaragua. This freshwater lake–8,264 square kilometers large and 19th-largest lake in the world–is home to one of the only species of freshwater sharks in the world. The largest island in the lake, Ometepe, has a population of 42,000 and two volcanoes. Here you’ll find hiking, horseback-riding and kayaking opportunities. Visit the Ojo de Agua area and swim in a natural turquoise pool in the middle of a lush forest. Go to Playa Santa Domino for a volcanic black-sand beach experience. Explore this huge island’s waterfalls, petroglyphs and two cities: Moyogalpa and Altagracia.

Zapatera Island, the second largest island in Lake Nicaragua is a protected national park where you’ll find ancient Indian royal tombs, a stone sacrificial altar, and stone stairs. Two hotels provide clean but basic accommodations and you will need to arrange your own transportation to the island with the hotels.

Many small islands grace Lake Nicaragua close to Granada. Hire a boat to take you on a ride around them–see Monkey Island, have lunch on an island, or rent a house for you and your friends for the weekend. You might even want to purchase your own island, as there are always some for sale.

Granada, the first city founded in the country (1524), is still a thriving port on the shores of Lake Nicaragua. In the shade of the Mombacho Volcano, its colonial buildings and Baroque churches blend with the Renaissance style of the central plaza. The 18th-century fortress of San Pablo on the island opposite Granada was built to protect the city from pirates.

The best way to explore Granada is by horse-drawn carriage. For two hours, these carriages, which are “parked” all around the central park will take you around the city. View the old fort outside town (built in 1754 and restored in 1996), where you may be able to climb to the top of one of the lookouts for a grand view of the city. Travel down the streets with the colorful houses and shops or ride along the lake with its playgrounds and picnic areas, bike trails and kiosks that line one long stretch of beach.

The Best Months of the Year for Traveling in Nicaragua

The rainy season in Nicaragua is May through October, with the heaviest rains in October. During rainy season it does not rain every day, but as the calendar approaches October, rain is more frequent and more intense. In November, there is often a little bit of rain, and then from December through May it’s dry, with May being the hottest month where temperatures may reach 100 F. The best months to visit to enjoy the sun and see Nicaragua at its greenest are November, December and January and then in the latter half of June, July and the first half of August.