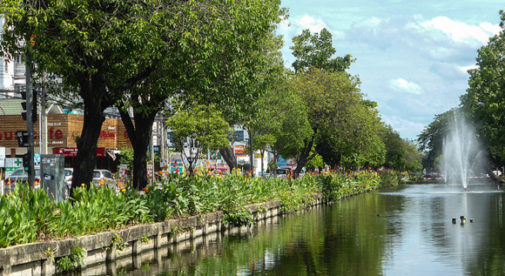 Along with being a low-cost and tropical retirement haven, Thailand has long been an international destination for medical tourism. Why? Because healthcare is low cost and excellent quality. I should know. I’m a retired Canadian schoolteacher living in the northern city of Chiang Mai, with personal experience of two hospitals here—one public and one private. In both I felt welcomed and unrushed. And in general I’ve found the health professionals in this city maintain a high quality of empathy and caring for all their patients.

Fees in private hospitals are a fraction of those in Western countries. Bryan Hennessey, a 74-year-old from New York City, visits Chiang Mai for several months each year to escape the cold winters back home. He recently had to visit a local ear, nose, and throat (ENT) specialist. It took him less than an hour to see the doctor after walking into the hospital. For a detailed ear examination and consultation, the total cost was less than $25, including prescriptions.

“This type of simple consultation would have been far more expensive in the U.S.,” he says. “And that would have been after going through the time and energy to book an appointment with an ENT specialist.”

These examples are not exceptions to the rule. Even in the best private hospitals in Chiang Mai, the average consultation fee for a specialist is rarely, if ever, more than $15 to $20. My regular visits to a local ophthalmologist, who is monitoring my glaucoma, cost less than $20.

And this is amazing value. The “Land of Smiles” is ranked among the world’s 50 best healthcare systems by the World Health Organization.

Most expats who have settled either part-time or full-time in this country will attest to the large number of readily available doctors, dentists, and opticians, combined with accessible, well-equipped, modern public and private hospitals. These institutions employ highly trained doctors and use cutting-edge technology and modern medical equipment that rival anything available in Western countries.

Public hospitals in Thailand are much less expensive than their private counterparts, but they are generally more crowded and sometimes less well-equipped. However, all the medical facilities in the country are staffed by well-trained doctors and nurses who provide excellent care to both expats and locals alike.

It is not uncommon to walk into a local private hospital and be seen by a specialist within the hour. Many doctors and nurses speak English or know how to quickly find someone who does.

Checking in for a first visit is always simple and efficient. Most of the receptionists in Thai hospitals are nurses, so you will immediately be transferred to the appropriate specialist following a few brief questions about your situation.

Originally from the U.K., Patrick Franklin moved to Chiang Mai several months ago. He recently visited a dermatologist at one of the local public hospitals. He was having a serious allergy problem on his hands that broke out overnight.

Patrick says, “It was very easy for me to walk in off the street and meet with a physician the same day. Because it was a public hospital, there were many people waiting ahead of me. However, it didn’t bother me that I would not be able to see the doctor until later in the day. A full consultation with the physician and two prescribed medications ended up costing less than $10. This would have been much more expensive in the U.K. and would have involved a much longer process to book an appointment with a specialist.”

According to the World Bank, 99.5% of Thais have health coverage under its universal-healthcare system. However, expats in Thailand don’t have public health coverage unless it is part of an employment package. This leads to the dilemma of how much health insurance is needed or even if it is needed at all. Many expats rely on their savings to cover any unexpected medical expenses; others buy adequate private medical insurance in case of unforeseen illness or accidents. Very few insure for outpatient care, as it is so inexpensive and drastically increases the cost of insurance.

Because of the low cost of healthcare, many expats feel that self-insuring is a better option and rely on an inexpensive accident-insurance policy as their primary coverage. David Thomson-Harry, an Australian who has lived in Chiang Mai for several years, is one of the many who have gone down this route. “At this point in my life I am much more likely to be involved in some sort of accident than coming down with a serious illness that will require extensive insurance coverage.”

But David also says that he may change his outlook on actual health insurance as he grows older, and he may eventually decide to purchase some sort of policy.

Many expats say that the level of dental care in Chiang Mai also exceeds what they are accustomed to in their own countries. And the prices are much better. A friend of mine recently had a high-quality dental implant here in Chiang Mai for a total cost of $1,500. He figured this was probably about half of what he would have paid back home. From basic check-ups to complex dental procedures, the cost is definitely less than in most Western countries.

For many common ailments, you don’t even need to visit a hospital. In Thailand, pharmacists often act as a first level of response. They are usually well trained and able to provide many remedies, such as antibiotics, which would only be available by prescription in other parts of the world. A network of community care centers frees up the doctors in the larger regional hospitals for more serious ailments and problems.

As in the rest of Asia, generic drugs are readily available at much lower prices than their brand-name counterparts. In Chiang Mai, I purchase eye drops for my glaucoma at a nearby pharmacy for less than half of what I used to pay back home in Canada.

With the wide availability of local fresh produce, combined with a rejuvenating, warm climate and laid-back lifestyle, staying healthy in Thailand is easy. However, it is reassuring to know that Chiang Mai’s medical infrastructure is well prepared to deal with any emergency that arises. The fact that the services provided usually come with a friendly smile is an added bonus.