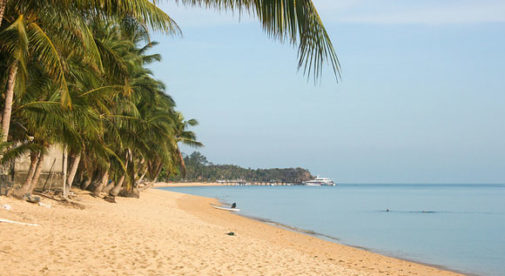 When you come from San Diego, California, most people think, “You are already in paradise, why would you ever leave?” But after traveling throughout Thailand and Malaysia, Ron Bond fell in love with Koh Samui, Thailand.

So he went home, tied up loose ends, and moved there three months later.

Back in the States, Ron had it all: a booming hypnotherapy business, a beautiful home near the beach, and great friends and family. But he also had a severe back problem that left him constantly needing prescription drugs to manage the pain.

“After exhausting every Western healing modality, I wanted some mind/body approaches to health. The best deep-tissue massages, acupuncture, and Chinese herbs are here on this little island,” says Ron.

“In Koh Samui, I get great health care for $50 a month. I was paying $1,000 a month for health insurance alone in the U.S. And with my surgeries, doctors’ visits, and medications, I was paying over $30,000 a year. There are two international Bangkok hospitals here. The average cost is 10 to 15 cents on the dollar, compared to the U.S. And the quality is the same,” says Ron.

Ron had his first experience with the medical industry here before he was completely drug-free and while his back was still giving him problems. He says, “I went to a doctor for an exam, I received three filled prescriptions, a steroid shot for inflammation from a nurse, and was out of the office within 20 minutes, with a bill for a whopping $40. No absurd mountain of paperwork, no waiting, and best of all, no bill with three zeroes attached.”

Living in Koh Samui is affordable in every way, not just the health care. Ron rents a detached bungalow with a full-sized kitchen, living room, balcony, and one bedroom with a king-size bed. Wi-Fi and U.S. TV channels are all included for $400 a month. He has an air conditioning unit but doesn’t need it all the time. Between his electric and water bills, he has never spent more than $40. Ron is a half-mile from the beach and a quarter-mile from all the stores. But because he is up in the hills, it’s super quiet.

He says, “I have the perfect blend of quiet at home, but I’m only a few minutes away from everything modern I need.”

It wasn’t just the affordable cost of living that Ron sought. “There is a warped relationship with age in the U.S., where you’re old if you’re over 40. In Thailand, with age comes respect and wisdom, which makes more sense. This is a very tolerant society. A real live-and-let-live mentality.”

Ron was looking for a modern place with all the latest amenities, combined with a quiet, simple life. He found just that in Lamai, Koh Samui’s second-largest beach resort area.

“Because the island is a major tourist destination, it has everything that travelers need, which makes it very convenient. Six months of the year is the low season, with very few tourists, so it’s mellow and quiet. The other six months of the year are way busier and very lively. For me, it’s a perfect happy medium,” he says.

“It has everything I had in San Diego: a large grocery store, every type of food or restaurant you could imagine, clubs, sports pubs, gyms, and the beach, of course. The convenience factor of being on a small island is huge for me. Everything I need is in a two-mile loop.”

And, in Ron’s opinion, “it’s easy to make friends here. And because tourism is such a huge industry, most of the locals speak some English. I have made several expat friends from around the world, and we go to any one of the sports pubs nearby to hang out, have some food and a couple beers, and watch football and Ultimate Fighting Championship. All the creature comforts are here. I’m never bored.”

Since Ron’s back is better and he’s no longer on any medications, he really focuses on a natural way to keep his back in shape. He gets two 90-minute massages and one acupuncture session a week. The total cost per month is $200. One of those famed Thai massages on the beach will hardly break the bank at $9…

Ron’s cost of living in Koh Samui is a quarter of what it was in San Diego. Add to that the fantastic health care system, the near-perfect weather, the friendly people, and the low-stress lifestyle, and it’s no wonder Ron feels he has found his very own utopia.

Get Your Free Asia Report Here: