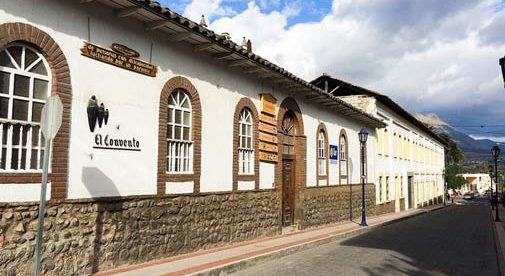 “I’m in better shape now than I’ve been in many years,” says Warren Sklar, reflecting on his new life in Ecuador. “I was 140 pounds heavier, I was having a very difficult time controlling my blood pressure with three medications, and my diabetes was pretty much out of control… If I had stayed in the U.S., I’d be dead now.”

That was his situation just over four years ago, while living and working as a tractor-truck driver in Tampa, Florida. But in 2013 he, along with his partner Carolyn Willhoite, moved to the small town of Cotacachi, in Ecuador’s northern Andes. And it didn’t take long for his health to improve.

He attributes the changes to several things, including being able to walk everywhere in town and joining the local gym for just $25 a month. His diet has changed, too. “There’s food with no preservatives, and fresh fruits and vegetables everywhere. The chickens you buy at the market were probably killed just that morning. And the crops are fertilized with natural things like cow or horse manure.”

When the couple first considered leaving the congestion and stress of Tampa behind, they looked at several countries, including Panama, France, and Ireland. But Warren had friends from Ecuador who encouraged him to check out their home country. “They said, ‘It’s cheap, it’s beautiful, you’ll love it.’ So we came here to look and two or three days later Carolyn fell in love with Cotacachi.”

Carolyn says the appeal was that Cotacachi is “a small town and there’s the friendliness of the people. It’s considered rude here to not say ‘hello’ to people when you meet them on the street. It just feels comfortable living here, and the friendliness makes all the difference.”

While Warren is certainly living a healthier life, there are many other things about small-town life in Ecuador that the couple enjoy, such as growing their own food. “In some areas of the States, you’re not allowed to even put up a small garden in your front yard,” says Carolyn. In contrast, here in Cotacachi they have a yard full of fruit-bearing trees like avocado, lemon, fig, peach, and apple.

If they had remained in the States, the couple would still have to work. But here in Ecuador they can live comfortably off their retirement funds and savings, and even afford a few extras. “I despise dusting,” says Carolyn. “So we have a maid that comes in on Mondays and we pay her $15 for about three hours of work. Also, here the grass is so thick that it was taking us two or three hours to cut, trim, and weed. So now we have a gardener who comes with his son and they do it all for $15.”

The extra time and low cost of living in Ecuador have given the couple the chance to travel, too. They recently returned from several days in Cuba and are planning a two-week tour of China this fall.

When not traveling, they hit the gym several times a week and often eat out with friends. They attend parties that their Ecuadorian neighbors host. Warren reads a lot and, as Carolyn puts it, they really “just kick back and enjoy life.”

Luckily they have plenty of time to do so, because they’ve found that taking it easy can be time-consuming in the best kind of way. “A 15-minute walk into town will actually take three hours, because you run into people and spend time chit-chatting,” says Carolyn.