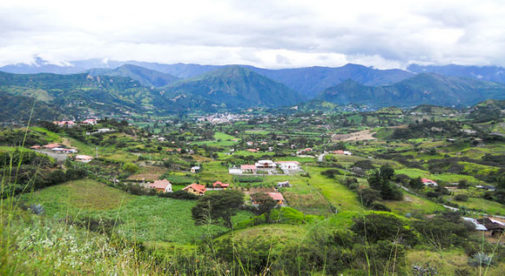 As a time to reflect on the past and envision the future, New Year is unrivaled among holidays.

Especially in the northern climes, where the holiday coincides roughly with the Winter Solstice and the shortest day of the year, New Year is an important spot on the seasonal cycle. The nights are as long and the days are as short as they’re going to get… It’s all uphill, sunlight-wise, from there on. So it’s a time of hope, of renewal, of looking forward.

We celebrate New Year in Ecuador as well. The country has its own distinctive New Year traditions that involve getting rid of last year’s baggage—by burning the effigies of past regrets—and starting the new year afresh.

But while Ecuadorians have taken strongly to the idea of the New Year bringing new beginnings, because of Ecuador’s blessed geographical location directly on the equator, the nights aren’t much longer and the days aren’t much shorter at New Year than they are any other time of the year.

Ecuador, as a Catholic nation and heir to the traditions of the Spanish who conquered much of the continent in the past, enjoy the same festivities we do…so New Year and Christmas are just as much staples of the seasonal religious and civic festivals as elsewhere in the West.

The weather, though, is not much different than it is for the other great solar cycle celebrations. In Ecuador, you can generally celebrate the winter and summer solstices and the spring and fall equinoxes all in your shirtsleeves. Or your bathing suit, if you’re on the coast.

I know expats who actually tire of this predictable, comfortable climate. They tell me they miss “the seasons”—by which I guess they mean the periodic digging out from under mountains of frozen snow in the winter and torrid, sweat-drenched huddling in air conditioning to survive the summer heat. And in truth, I have myself complained…although not loudly or long…about not being able to tell the seasons apart in Ecuador. The first few years we lived here, the only way I could tell what season it was back home was by which sport was being played on U.S. TV.

Super Bowl: “Must be winter…” World Series: “Must be fall…”

I’ve stopped complaining about it—and these days just appreciate how special the weather is here. Ecuador is supposed to have two seasons: a wet season and a dry season. I have trouble telling them apart, and this lack of obvious seasons bothers me not one whit. It would bother me if Ecuador’s one season was like the extreme northern winters or summers. But where I live in Ecuador, I don’t even have a name for what, to my North American senses, is the one season I experience. It’s just “the weather today.” Sure, there are weeks during the year when I may need an umbrella or a sweater when I walk about town more often than usual, but the weather here is simply never that big a deal to me.

So for me and lots of other expats here in Ecuador, the New Year is a season of gratitude more than anything else. We’ve already done the lion’s share of our “letting go of the old and welcoming the new.” Our new lives in Ecuador are proof of that. What many of us celebrate more than anything else is the fact that our New Year is going to be spent right here in our new home…and almost certainly in shirt sleeves under a warm, blue Andean sky rather than in the darkest depths of the shortest, coldest days of the year.