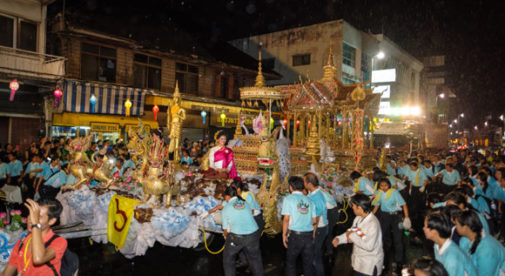 Thailand really is the land of festivals. There seems to be a different major holiday every month. And Chiang Mai is the place to celebrate most of them. For some reason, tourists gravitate to this part of the country by the thousands to partake in everything from Songkran to the Lantern Festival.

Like the rest of the world, Thailand celebrates New Years Eve and New Years Day with parties, fireworks and everything else that goes along with this crazy part of the year on December 31 and January 1. However, it is only one of several “New Years” that are celebrated throughout the year, including the Chinese New Year festivities that usually occur at the beginning of February.

The first week in February also heralds the arrival of the Chiang Mai Flower Festival. The highlight of the festival is the huge parade that can last several hours and features an endless series of beautiful floats decorated with fresh cut flowers and other greenery. Suan Buak Hat Park in Chiang Mai becomes a center of floral beauty, agricultural displays, contests, and sales.

The official Thai New Year lands on April 13 of each year and lasts for at least two or three days. In some places, Songkran lasts more than a week. What used to be a simple symbol of cleansing by dripping a little water on your friends and family members has morphed into citywide water fights throughout the country. Now super-soakers reign supreme for several days and it is not safe to leave your home unless you are prepared to return soaking wet.

Loy Krathong, a more romantic celebration, takes place on the full moon night of the 12th lunar month. Some say the origin of this festival was to persuade the local serpent-ruler, Phaya Nak, to halt the monsoon rain, dispel the floods and return the rivers to their normal levels.

A traditional “Krathong” is only a few inches in diameter and made from a section of banana tree trunk. Thais decorate their Krathongs with elaborately folded banana leaves, flowers, candles, and incense sticks. They are then floated on rivers, canals or other bodies of water to “let go” and start life afresh…another type of cleansing tradition.

In Chiang Mai, at the same time, Yee Peng or the Festival of Lights also takes place. Beautifully illuminated lanterns are launched into the night sky throughout the city. Again, it is believed that a person’s bad luck will disappear into the darkness with the lantern. Both these festivals have become major tourist draws and are accompanied by large parades.

His Majesty, King Bhumibol, Rama IX of Thailand was born December 5, 1927. The King’s birthday is celebrated each year on that day or close to it. It is also referred to as Thai Father’s Day since the King is the symbolic father of Thailand. Across the country there are parades and other events that take place to mark this important day.

These are only a few of the many festivals and holidays that occur throughout Thailand each year. Many more local events take place, each with their own traditions and stories. It is never difficult in Thailand to find an excuse to party!