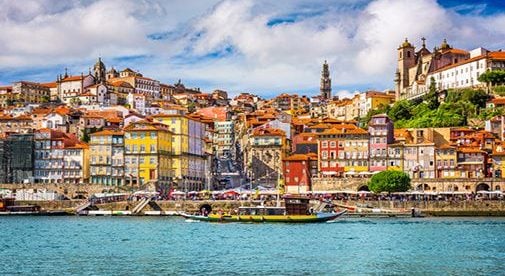 Almost half of Portugal’s population of 10,300,000 is concentrated between two major metropolitan areas: the capital of Lisbon, and Porto in the north. The remainder of the country’s residents live in cities, towns, and villages of varying sizes. Only a handful of Portugal’s 151 cities hold 100,000 or more residents, and about half range between 10,000 and 20,000.

Listed from north to south, here are some important urban centers on the mainland, as well as the capitals of the autonomous regions of Madeira and the Azores. Population figures are from the 2011 census or more recent, where possible.

Situated on the banks of the Douro River, Portugal’s second largest city has Celtic roots. It dates from the 4th century B.C. when it was a Roman settlement called Portus Cale, a name which led to the country’s name. From early times, it played an important role in trade between Braga and Lisbon, but truly began to flourish during the Age of the Discoveries, and in fact was the birthplace of Prince Henry the Navigator.

The Douro Valley is magnificent wine growing country. In the 18th century the British were at war with the French, and therefore short on wine. Portuguese vintners began adding brandy to their products—thus creating port—to ensure their wine would travel the distance to England. Across the Douro from Porto in Vila Nova de Gaia, today you can visit the legendary port wine houses and enjoy the fruit of hundreds of years of craftsmanship.

Like Porto, Braga has Celtic roots, and is the oldest city in Portugal. The Minho region of the country is extremely green and fertile, which means that in addition to the area’s remarkable history and architecture, lush gardens, and brilliant flowers are everywhere.

Twenty minutes from Braga, and inextricably tied by history, Guimarães is often referred to as “the birthplace of the Portuguese nationality.” It is here that the Count of Portucale, Afonso Henriques, was born. In this same city in 1128 he fought successfully for independence from Spain. The Kingdom of Portugal emerged, with Afonso Henriques as its first king.

The highest city in Portugal, Guarda (3,465 feet) is located in the Beira Interior province, and is the gateway to the Serra da Estrella mountains and the country’s only ski resort. Home to a major university, the city also provides easy access to Spain.

The Mondego River runs through this bustling city in the Beira Litoral province in the center of the country. Once the capital of Portugal, the city’s dominating feature is unquestionably its historic university. Originally established in Lisbon in 1290, it eventually moved in 1537 to its present location, perched high above the city on the site of a former palace. The oldest university in Portugal, the U of C is also one of the oldest universities in continuous operation in the world. 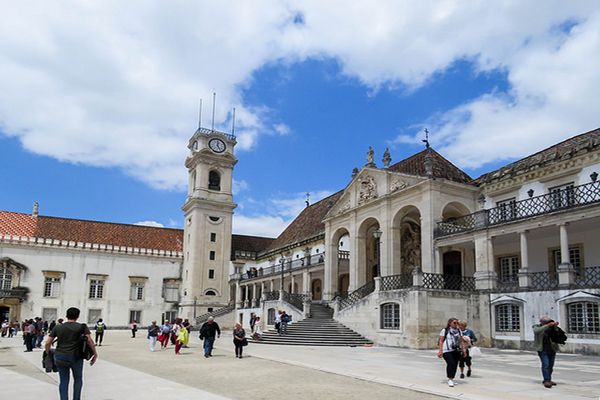 The capital of Portugal is one of the oldest cities in the world, predating other modern capitals in Western Europe by centuries. Pre-Celtic groups, Phoenicians, Greeks, Romans, Germans, and Moors came and went, building the city’s rich culture. Lisbon survived the devastating effects of the Great Lisbon Earthquake of 1755 with the impeccable planning and care of the Marquis de Pombal. Today the hilly city on the Tagus, or Tejo, River is a mecca for business and commerce, arts and entertainment, and a veritable gastronomic wonderland.

Once known as “The Portuguese Riviera,” Cascais is a former fishing village that has retained its traditions. Fisherman still depart early each morning for the catch of the day, and lunch on the wharf over steaming kettles of seafood soup. The hilltop fortress, built to protect the area from Spanish invasion, became a royal residence and is now a pousada. The town is a major draw for visitors from around the world, who come for lovely beaches, laidback ambience, and food and wine to suit every taste.

This city is the capital of the Alentejo region, noted for broad plains and a hot-summer Mediterranean climate. Bordered on the north by the Tejo River and on the south by the Algarve region. Évora lies 87 miles from Lisbon and 50 miles from Badajoz on the Spanish border. With a history going back more than 5,000 years, the city is a member of the Most Ancient European Towns Network, along with nine other cities including Cádiz in Spain and Ireland’s Cork. Ancient megaliths, a Roman Temple, and a Gothic cathedral are just some of the evidence of Évora’s fascinating past. Faro is the gateway by air to Portugal’s southernmost region, the popular expat region of the Algarve. Its Municipal Museum is based in a 16th century convent, with artifacts dating to prehistoric times, and the noteworthy Arco da Vila sits on the site of a medieval castle gate. Faro also accesses Rio Formosa Nature Park and a busy beach resort, Praia da Ilha de Faro.

Thirty minutes northwest of Faro is Albufeira. The town was virtually destroyed by the Great Lisbon Earthquake, when 33-foot waves washed over the shoreline, leveling most of the buildings in their wake. The former fishing village experienced a renaissance in the 1960s when tourism began to flourish, a trend that continues to this day.

In truth, the beach resort is named Praia da Rocha, as Portimão itself is a residential city about two miles north of the beach. Numerous sandy coves line this coastline, but the heart of the action is in the restaurants, bars, and nightclubs that line the cliff-top promenade in Praia da Rocha.

Bonus picks: Sometimes overlooked when discussing Portugal are the archipelagos off the mainland, Madeira and the Azores, located in the Atlantic Ocean west of Lisbon.

An ancient subtropical rainforest once covered most of the main island of Madeira. In fact, it’s the reason for its name: madeira means “wood” in Portuguese, and is also the name of the classic wine of the region. The capital, Funchal, is known for its harbor, and is an ideal base to explore the mountainous island, a hiker’s paradise with peaks more than 6,100 feet in height. Volcanic activity thousands of years ago yielded a fertile, green landscape which many consider an unspoiled Hawaii. London-based World Travel Awards named Madeira for the fifth time in 2018 “Europe’s Leading Island Destination.”

Settled in 1444, Ponta Delgada on São Miguel Island is the capital of the Azores. Like Funchal, the city’s volcanic past is strikingly evident, as a tour of the Sete Cidades Massif with its caldera, crater lakes, pumice cones, and lava domes attests. Human history tells a story here as well: in town, the iconic 18th-century three-arched city gates bear the royal and city coats of arms. Grottoes, botanical gardens, and pineapple plantations abound, and a city-based tour company offers dolphin swimming and whale watching excursions.