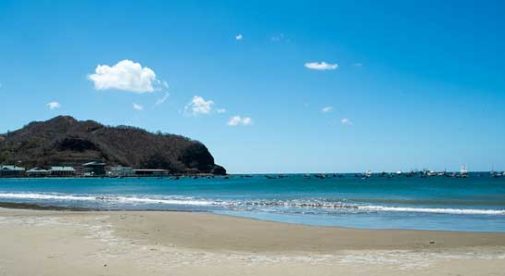 San Diego native Robert Quartiano, 63, started his work life at 18 as a commercial fisherman in Oregon. At 40, he thought he was getting a little old for the job so he went to school and became a registered nurse. Nineteen years later, at 59, Robert decided to retire early.

Robert had visited Nicaragua in 2002 and liked the fact that it was so economical to live there. But what really sold him on Nicaragua were the property prices. He bought a lot (a little less than an acre) with a small shack for $17,000. Located about five miles north of the beach town of San Juan del Sur, he decided to build his dream house there.

Robert liked the funky town of San Juan del Sur, with its collection of restaurants, clothes and surf shops, colorful characters, and the fact that it is surrounded by 22 beaches. But he wanted his dream house far from the noise and high energy of the town.

“My retirement life in San Diego wasn’t fulfilling enough for me. I lived in a condo, the HOA rules prevented me from being able to do anything, any hobby. I could go to the beach, but I grew up there and had been to these places thousands of time. Maybe if I’d had a big home with landscaping projects and other things to fix, it would have been okay. But I couldn’t afford a house that big there,” says Robert.

In Nicaragua, Robert has multiple landscaping projects and is adding more to his dream house. Labor is extremely affordable. A cement mason in Nicaragua costs $17.85 a day…a lot less than what it could cost in the U.S.

And he is able to live in Nicaragua and continue building his home all using only his Social Security check.

Robert says, “I get $1,000 a month on Social Security. My property taxes come to $60 a year. Electricity is $9 per month and water $36. I don’t have WiFi or TV. I use my smartphone when I need to communicate with people and for WiFi, I go to the nearby Villa Mar Hotel/Restaurant and get it for free with my $3.65 breakfast or I pay for it when I need it ($1 for an hour). Sometimes I go to Mango Rosa, an expat community, with a pool and restaurant to eat lunch. I also buy my fruits, vegetables, and chicken from the local fruit truck twice a week.”

“I don’t get sick that often; the one time I used healthcare I had severely sprained my ankle. At the public hospital in Rivas there was no paperwork involved and the doctor saw me within a minute. No blood test, no checking a million things before they take care of the problem. He gave me an X-ray to ensure that my ankle wasn’t broken, made a removable soft cast, wrote a prescription for pain pills, and when I went to pay, I was told it was free,” says Robert. Nicaragua, like many countries in the world, has government-subsidized healthcare.

“My day is simple. I wake up at 4 a.m. I read until the sun rises at around 5:20 a.m. I sweep out the kitchen, then relax and have my first cup of coffee. My tools are in the kitchen and I like to have a project ready to go each day. I’ll do landscaping, pruning, or plane wood to detail the barbecue area. I create lawn art, take out the weeds, or take a walk to look at monkeys. My day is filled with things I want to do and love to do. So different from San Diego where life often seems to get in the way,” says Robert.

Robert has advice for people who are thinking of moving to Nicaragua: “Come for a visit first to see if you like the tropics; this climate is not for everybody. Check out the neighborhood you’re interested in. You might find out that there’s a dog that barks every night, or a rooster crowing, or pigs that show up inside your property. But you might discover the retirement location of your dreams.”