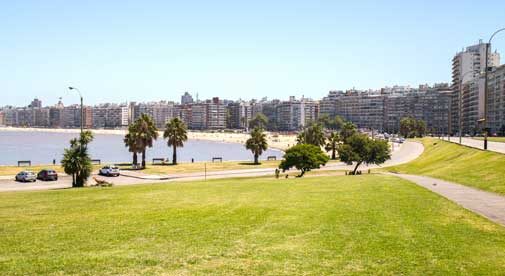 Year after year, Mercer ranks Montevideo as the city offering the highest quality of life in South America. And after living here for several years it’s easy to see why.

Montevideo is the capital of Uruguay, a country that stands out for its political and social stability.

But besides all the interesting things to do in Montevideo, you also find interesting places to visit in its vicinity—many ideal for a long weekend.

What places exactly? The following are seven long-weekend getaways popular with Montevideo expats.

In the summer, Punta del Este bustles with hundreds of thousands of vacationers, most staying for weeks at a time. (Uruguay is in the Southern Hemisphere. So, the summer high season is January and the first part of February.)

However, for a long-weekend getaway from Montevideo, a better time to visit Punta del Este is in the shoulder season. For example, in November and early December.  Or in late February and March. The crowds are gone. The weather is often still nice. And you can rent a place to stay for a fraction of high-season rates.

The best location for a shoulder-season visit to Punta del Este is on the Peninsula. In the morning you can watch the fishermen come into the marina with their catch. Take a scenic walk on the boardwalks and walkways that follow the coast of the Peninsula. Then, spend some time on the beach.

In the afternoon you can take a siesta. Then, stroll along the shop-lined main avenue, Gorlero. For dinner, consider one of the famous restaurants and nightclubs by the marina.

Sometimes a group of friends will go in together to rent an apartment or house with several rooms and an equipped kitchen. That way they can split the costs, enjoy each other’s company, and don’t need to go to a restaurant for every meal.

If you stay at a place near the base of the Peninsula, you’ll be close to the best sand beaches as well as the bus terminal, if you decide to come from Montevideo by bus.

Another beach town good for a shoulder-season visit is Punta del Diablo. It’s 180 miles east of Montevideo (a four-hour drive) and just 27 miles west of the Uruguay/Brazil border.

During high season, Punta del Diablo fills with tens of thousands of vacationers, many of them young and looking for a party.

Outside of the high season, Punta del Diablo becomes tranquil. For me and others, it’s a place where pretentiousness and superficial cares seem to drop away. So, it’s an ideal getaway for personal reflection or to strengthen bonds with others.

You can find rustic cabin rentals all over Punta del Diablo. If you want to rent an architect-designed home built with permits, you find more to choose from in La Viuda.

Colonia del Sacramento’s Barrio Histórico is the original six-by-eight-block waterfront site where the city was founded in 1680. It’s a UNESCO World Heritage Site and one of the most visited attractions in Uruguay. From Montevideo, it’s a 112 mile (two hours and 20 minutes’ drive) drive west.

In Barrio Histórico you find original stone streets, early Portuguese colonial structures, and later Spanish colonial structures. (The two empires of the day fought to possess it.) It’s an interesting place to explore with lots of good photo opportunities.

Besides colonial homes, structures include a restored section of the City Gate, originally constructed in 1745; the refurbished cathedral, originally built in 1810; and the lighthouse, built in 1857. (For a small fee you can climb to the top.)

You also find a museum and seven mini-museums to browse. Among the mini-museums is the Colonia del Sacramento Portuguese Museum. It’s a Portuguese house constructed in the 1700s with period furniture. Another is the Tile Museum with a collection of French, Portuguese, and Spanish tiles, many made between 1849 and 1900.

For a place to stay near Barrio Histórico, choose between modern hotels and traditional posadas (inns). Many of the posadas are in period buildings.

You also find several good restaurants in and near the historic district. Popular offerings include steak, lamb, pasta, and good local wines.

4. A Long Weekend Getaway to Boutique Wineries Near Carmelo, Uruguay 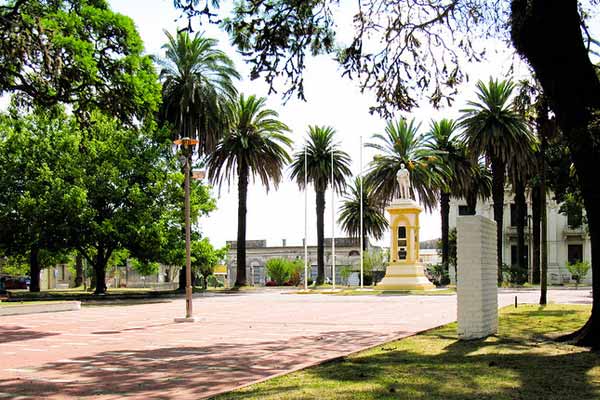 From Montevideo, the city of Carmelo (population 18,000) is about 150 miles (a three-hour drive) west. The city of Carmelo is divided by a creek, with the two sides joined by an iron bridge. In Carmelo, you can stroll along the creek-front, visit its river beach, or try your luck in the casino.

However, the main attraction for a long weekend escape to Carmelo is the nearby countryside, which is dotted with boutique wineries. Most are family-owned. And some serve exquisite meals paired with their own vintages.

The blood alcohol limit to drive in Uruguay is zero. You can’t drink and drive. Period. If you don’t have a designated driver along you have a couple of options.

One is to visit Carmelo’s wineries by taxi or bicycle. One popular winery, Bodega Familia Irurtia (known for its cabernet sauvignon) is just two miles from Carmelo’s center.

A second option is to stay at a winery. Bodega & Pasada Campotinto is a winery with 12-room country inn three miles from Carmelo’s center. It’s known for its tannats, a full-bodied red that goes perfectly with steak.

One of Uruguay’s oldest wineries is Narbona. Besides a winery, the property includes the Narbona Wine Lodge, a five-room luxury hotel, and a restaurant. Vintages here include tannats, sauvignon blanc, and a pinot noir. Besides wines, they also make gourmet cheeses and yogurts. Narbona is about eight miles north of Carmelo’s centro.

5. A Winter Getaway to Termas del Daymán, a Hot Spring Village Near the City of Salto, Uruguay

While winters in Uruguay don’t get really cold (freezing temperatures are rare), they do get cool. So, it’s a perfect time for a hot-spring getaway.

Termas del Daymán is a small hot spring village with a year-round population of 356. It’s 300 miles northeast of Montevideo in Uruguay’s Salto Department. (You can go by overnight bus with reclining sleeper-seats and arrive at the hot springs in the morning.)

In Termas del Daymán, you find the Daymán Municipal Thermal Park where you can relax in one of the seven thermal pools or enjoy a water-massage shower. The mineral-rich water, here, comes out of the ground at 113 F.

Across the street from the park, you find small hotels and cabins, restaurants, and stores. When you pay to enter the hot-spring park (the admission is less than $4) you get a plastic bracelet. So you can come and go as you like during the day.

6. A Long Weekend Getaway to Nearby Buenos Aires, Argentina

Buenos Aires (population around 3 million) is the capital of Argentina. It’s the second-most visited city in Latin America (after Cancún, Mexico).

Buenos Aires is just across the Río de la Plata (La Plata River) from Colonia del Sacramento, Uruguay. (A one hour and 15-minute ferry crossing.) You can also take a ferry to Buenos Aires directly from Montevideo that crosses the river diagonally. (A two-hour-15-minute crossing by high-speed ferry.) Or you can fly across the river to Buenos Aires from Carrasco Airport in Montevideo. (A 30-minute flight.)

A popular place for visitors to shop and eat in downtown Buenos Aires is on and near Florida Street. A section of Florida is a pedestrian street where you often see street musicians, tango dancers, and jugglers.

It may surprise you that one of Buenos Aires’s most-visited attractions is a cemetery. It’s located in the upscale Recoleta neighborhood. It’s where you find the ornate crypts of Buenos Aires’s past rich and famous, including Argentine presidents, Eva Perón, and Napoleon’s granddaughter.

Another place to see is Puerto Madero. It’s a port area renovated to become modern and grand. It’s where you find sleek corporate offices, posh apartments, and high-end restaurants.

7. A Visit to Iguazú Falls in Argentina—a Force of Nature You’ll Always Remember

The falls, which span the Argentina/Brazil border is within two national parks. One in Foz do Iguaçu, Brazil. The other in Puerto Iguazú, Argentina. So, you can visit the falls from the Brazil side or the Argentina side. My preference is the Argentina side, with more falls, trails, and viewpoints.

If you’re going to Iguazú Falls for a long weekend from Montevideo, flying is the way to go. It’s a 30-minute flight from Montevideo to Buenos Aires. From there, it’s a two-hour flight to Puerto Iguazú, near the falls.

(Note: Your flight arriving from Montevideo and your flight departing to Iguazú Falls may not be at the same Buenos Aires airport. So, leave enough time to change airports. Or bookend your trip to the falls with time in Buenos Aires.)

Once you arrive at the falls, you can explore the lower trails and upper trails on your own or with a guide. You can also ride in a small boat to near the base of the falls.

Of all the waterfalls that make up Iguazú Falls, the one with the most water volume and longest drop is Garganta del Diablo (Devil’s Throat). On the edge of this fall is a landing you can stand on. (Believe me, witnessing the raw power of this fall up close is an experience you won’t forget.)

To get to the Devil’s Throat, you take a small train up through a rain forest. Then you walk across the river on narrow footbridges to reach the landing.

Most of the hotels in the area are in the town of Puerto Iguazú, an 18-mile drive from the Iguazú National Park, where you find the falls. If it’s a special occasion or a splurge weekend, you might want to pay more to stay at the Gran Melía Iguazú. It’s a 5-star hotel and spa inside the national park with views of the falls.