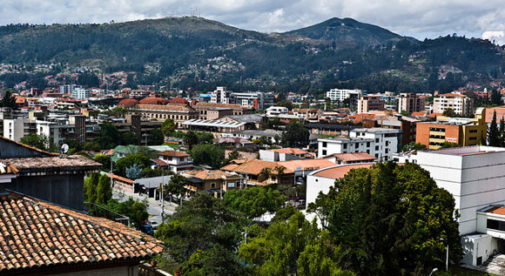 “My husband and I were happily living in Arizona in a retirement community when, in 2008, everything changed,” says Patty Grimm. The financial crisis dealt the couple a heavy blow, and they no longer felt they could live the same quality of life on their retirement income. “We knew that if we wanted to keep our nest egg, we’d have to look outside of the U.S. to live.”

Six years later, the Grimms are in the high Andes and enjoying an affordable and high-quality retirement in one of the world’s foremost retirement destinations—Cuenca, Ecuador.

“We have less stress here than in the States. We laugh a lot and enjoy getting together with friends. We have enough in the budget to take trips whenever we feel like it. You can get away from all the bad news, the politics, the high cost of living,” says Patty.

Mike, in his 70s, and Patty, in her 60s, have been married for 25 years, after meeting each other through work. Ohioan Mike spent his career in the Air Force—visiting 61 countries in the process—while Patty, from Los Angeles, worked as a secretary.

The couple traveled throughout the U.S. during their careers, before settling in Arizona. They planned to spend a happy retirement there. But they couldn’t shake the feeling that life in the U.S. was getting progressively worse: Ever-increasing costs were making it difficult for them to live the retirement they wanted.

“In general, I felt like the quality of life was deteriorating in the United States in terms of individual freedoms, cost of living, and healthcare,” says Mike.

The financial crash of 2008 proved the final straw. It forced them to consider an overseas retirement, knowing they couldn’t afford the same quality of life in the States.

The couple had seen Ecuador recommended in the pages of International Living, while an Ecuadorian neighbor back in Arizona also spoke highly of the country. This spurred them to attend IL’s Fast Track Ecuador Conference in Quito back in 2009. They liked what they saw so much that they moved to Cuenca a year later.

“Cuenca and Ecuador were attractive because of the consistent weather, affordable cost of living, and less government activity in our private lives,” says Mike of their decision.

Like many expats, they chose to rent a small apartment for $350 a month to test the water before deciding Cuenca was indeed the place for them. Cuenca’s year-round springtime weather was just to their liking. Patty and Mike also found the city highly affordable and home to a friendly and welcoming population (both expats and locals) that made them feel right at home.

The couple now rents a beautiful three-bedroom condo overlooking the city and surrounding mountains for $650 a month. They spend around $500 a month on groceries (although they say they prefer not to confine themselves to a tight budget), $27 for gym membership, around $330 for entertainment and eating out, and $56 for internet. They also pay $80 for a maid, $64 for DirecTV, $66 for electricity, and $7 for water. Unlike many other expats, the Grimms also have a car. But, like everything else in Cuenca, the cost of this is low; with gas costing less than $1.50 a gallon (compared to nearly $2.50 a gallon in the States at time of writing), their monthly bill comes to around $23.

“We choose to live very well, so I would say that the essentials would require around $1,500 and our discretionary add-ons another $800, for a total of $2,300,” says Mike of the couple’s monthly spend. “If we had to, we could do it for a lot less. We can save money quite easily here.”