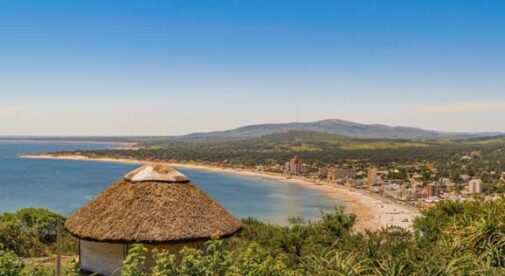 Do you like the idea of retiring abroad in a small coastal town? If so, let me share a couple of interesting options in Uruguay.

First off, the fact that they’re in Uruguay is a big plus. Uruguay doesn’t get destructive earthquakes, doesn’t have volcanoes, and is not in a hurricane path. Plus, it’s socially stable, with the largest per-capita middle class in the Americas.

It’s also a food-rich country. Uruguay’s fertile farmland produces a variety of crops ranging from grains to citrus. And its grazing pastures sustain more than 11 million cows—more than three cows for every resident.

And if you’re a retired expat, you’ll find Uruguay to be a tax-friendly jurisdiction. That’s because retirement pensions, social security payments, and rental income from back home don’t need to be reported in Uruguay.

Regarding the two small beach towns I’m referring to—Piriápolis and Atlántida—both are set in an area of natural beauty. Both offer a laidback lifestyle. And both are not far from the shopping and services of larger cities.

Near the turn of the 20th century, Don Francisco Piria, a Uruguayan developer, visited France’s Côte d’Azur. The experience inspired him to create Uruguay’s first coastal resort town, which he named Piriápolis.

Piriápolis is set in the only coastal area of Uruguay with hills. It fronts the Río de la Plata, a sea-sized body of water open to the Atlantic Ocean.

Piria got started by building Uruguay’s first luxury hotel, the Gran Hotel Piriápolis, which he finished in 1905. From 1910 through 1920 he developed the city’s infrastructure and began selling lots.

From 1920 to 1930, he built another hotel, the Argentino. In its day, it was the largest and most luxurious hotel in South America.

Today, Piriápolis (population around 9,000) is known for its waterfront centro. On one side of the narrow coastal road is the Mediterranean-style beachfront esplanade. On the other side, large sun canopies stretch out over the entrances of stores, cafes, and ice cream shops.

For shopping, you find all the basics, such as markets, hardware stores, and pharmacies. You also find dozens of restaurants and cafes.

A fishing fleet of small boats tied up in the local harbor. They keep Piriápolis’ restaurants and residents in fresh fish and seafood.

For medical services, you find two small private hospitals and one small public hospital. All three are part of networks. So, you can get access to the services of larger hospitals if you need them.

Uruguay is in the Southern Hemisphere where the seasons are opposite. During the high-season month of January, when the majority of vacationers and snowbirds arrive, Piriápolis’s population can triple.

For many full-time residents, the high season is a time to socialize and meet new people. For others, it’s an opportunity to rent their home to vacationers, earning some money while they travel.

In winter, Piriápolis is quiet—ideal for long walks, reading, and home projects. Socializing during winter includes meeting other full-timers for lunch or an evening of board games.

In Piriápolis’s centro, most of the homes are single-family places with yards with some water view apartments near the coastline.

Beyond Piriápolis’s city limits, you find beach neighborhoods of single-family homes along the coast. They stretch six miles northwest of Piriápolis; and four miles east of Piriápolis.

Most expats living in Piriápolis make regular shopping trips to Maldonado and/or Punta del Este. (A 35-minute drive each way.)

Maldonado is a middle-class city with a full-time population of 77,000. Punta del Este is Uruguay’s most upscale beach resort. It’s a city of around 25,000 that receives 100s of thousands of vacationers in the summer.

Between Maldonado and Punta del Este, you find a range of specialty shops, home stores, and a shopping mall. Besides shopping, you also find English-speaking professionals, including residency attorneys and dentists.

Piriápolis is 61 miles east of Montevideo, Uruguay’s capital. Half of Uruguay’s population of 3.5 million lives in and near Montevideo.

In Piriápolis’s centro, you can get by without a car—walking or riding a bicycle. You also find a bus terminal near centro with several trips per day to Maldonado, Punta del Este, and Montevideo.

If you live on San Antonio Hill or in one of the coastal communities outside of the centro area, you’ll likely need a car.

Natalio Michelizzi was an Italian who worked in Buenos Aires, Argentina. In 1935, he vacationed in Uruguay. On that trip, he came upon a beautiful coastal area with lots of trees and white-sand beaches known as Atlántida.

(The trees—150,000 pines and eucalyptus—were planted by a group of doctors and medical students as a beautification project in 1908.)

Michelizzi was enchanted. He took out loans to buy all the Atlántida-area land he could. Then, he spent the rest of his life developing Atlántida into a thriving beach resort town.

In fact, Atlántida is the anchor town of Uruguay’s Costa de Oro (Gold Coast), a 42-mile stretch of summer vacation communities. So, you find more in the way of shopping and services in Atlántida than you’d expect in a town its size.

Atlántida is divided by a coastal highway (the Ruta Interbalnearia).

On the south side of the highway is Atlántida Sur with the beaches. It’s the side of town where you find two large supermarkets, a pedestrian street, several restaurants, and half a dozen medical clinics.

On the north side of the coastal highway, is Atlántida Norte, which is less developed.

Besides Atlántida, expats settle in nearby Costa de Oro communities. These include Villa Argentina to the west of Atlántida; and Las Tocas and Parque Plata to the east of Atlántida.

While you find a few apartment buildings in Atlántida Sur, most Atlántida-area homes are single-family places with yards.

As an expat in Atlántida, you can enjoy the laidback lifestyle of a small coastal town. And at the same time, be close to a capital city with several shopping malls, more than 1,000 places to eat, and the country’s top hospitals and medical specialists.