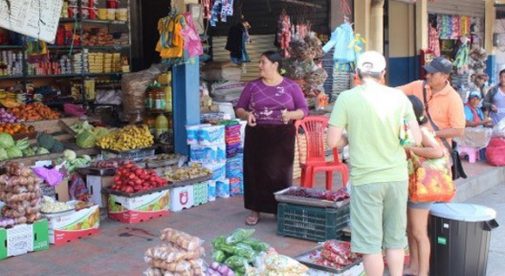 “Honey, I think we need to make a trip to the ‘Tad,” my wife Rita said to me the other day. “Great,” I replied. We’re just mad about the ‘Tad.

The place my wife was referring to was La Libertad—a.k.a. The ‘Tad—a bustling commerce town a short bus ride from our home in Salinas on Ecuador’s Pacific coast. We often make the trip there to do a little shopping and run some errands.

A 10-minute bus ride later (which cost me 30 cents and Rita 15 cents with her retiree discount) and we were in La Libertad which sits on a hill, with a malecón (boardwalk) and waterfront at the bottom.

Once we were off the bus, we walked through one of my favorite parts of town, the food vending blocks. There is a covered two-story mercado (market), but most of the action—and all of the fun—is out on the streets. Over several square blocks, there are hundreds of vendors under colorful sunshades selling vegetables, fruits, rice, beans, cheese, eggs, milk, chicken, pork, beef, cleaning supplies, household items, baby chicks, parakeets, farming supplies, livestock feed…it really just goes on and on.

This is where the locals shop. They pay cash, no sales tax, and get no receipts. Most items are packaged so that the vendors don’t need to make much change. It will be a pound of strawberries for $1, two pounds of potatoes for 50 cents, and so on. And if you don’t like the price of mangoes at one stand, well, here comes a guy on a bicycle with a basket full of them who will make you a better offer.

The fish market is also a great place. I usually shop at the one in our smaller Salinas mercado, but in La Libertad there is a much bigger selection of fish, crabs, shrimp, and shellfish. You can get four- or five-pound tuna in Salinas, but in La Libertad they have the big ones you need an electric band saw to cut.

The ‘Tad’s Buenaventura Mall is not a mall in the traditional sense. Outside is a square with more vendors, a stage for presentations, and a restaurant pavilion. Inside, it looks like a flea market and a department store had a baby, which then exploded. There are two levels of a mad conglomeration of…I can’t call them stores or even booths…just areas where people sell or repair stuff. I’ve bought watch batteries, cellphone batteries, children’s clothing, a hat, a backpack, and shampoo in here.

This time, I went to a small booth where a little old man sells and repairs watches. I showed him a wafer battery I needed to replace, and he pulled out a drawer with a strip of ten of them. They were only $3 each, so I bought two—mostly because I had a $10 bill, and it seemed rude to ask for that much change.

The street that winds down the hill from the Buenaventura Mall to the malecón is always hopping…probably 80% of the day-to-day commerce on the peninsula takes place there. There are stores lining the streets, and most of them also have their wares out on the sidewalks…and then there are vendors who have just set up at random spots in the street. They may be selling juice, food, TV and VCR remote controls, clothing—on our last trip, we passed a gentleman standing by his motorcycle, which was piled high with hundreds of handmade leather belts.

We wanted to get our Ecuadorian driver’s licenses copied and sealed in plastic, so we could show the copies and keep the originals safe. At the bottom of the hill, we walked into a small hallway with a sign that said both “copias” (copies) and “plastificado” (lamination) over the door. Ten minutes later, we left with perfect color copies, printed with a laser printer front and back, and sealed in protective plastic. At just $1 each, it is extremely cheap insurance against the cost of trying to replace the originals.

Another productive morning spent at the ‘Tad.