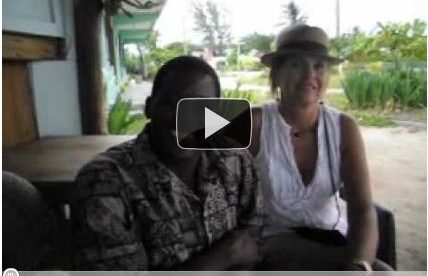 A tropical shower started falling just as we stopped our golf cart next to a tiny box of a building with a palm-leaf palapa on the front. Although we were driving a golf cart, we weren’t golfing… we were on a quest for lunch south of San Pedro Town on Ambergris Caye in Belize.

Golf carts are the preferred means of transportation on Belize’s most popular island, and we were searching for Robin’s Kitchen, a little eatery that a friend had recommended. “Robin is an excellent chef,” our friend had told us, and when we realized that the tiny box with the palapa covering two rough tables on a bare dirt lot next to the road was Robin’s domain, we really started to get interested.

Ambergris Caye is by far the biggest tourist draw in Belize, with white sandy beaches, clear Caribbean waters, and a magnificent living reef just offshore that makes the island a fishing, snorkeling, and diving paradise.

There are lots of upscale hotels and restaurants on Ambergris, but there are also hundreds of tiny food stands like Robin’s where locals whip up traditional Belizean and Caribbean dishes with little more than a few pans, a burner, a bottle of gas, and seafood from just off shore. These are the places that give you the real island feel, and we started feeling it ourselves as soon as we pulled up our chairs under Robin’s palapa.

Robin showed us his entire menu as soon as we sat down… he pulled a fresh snapper from a pan and pointed out the chicken on the nearby grill. “You can have either one, or I can put both of them on a plate for you,” he said. We wanted the fish but couldn’t resist the smell of the grilling chicken, so we agreed to the combo.

Robin and his wife went to work on our order, while their 10-year-old grandson and his playmate entertained themselves by guessing our ages and spelling their names for us. Robin brought out fresh mango juice as an appetizer, and right after the children had counted past a hundred to show off their numbers, our lunches came out.

Plates heaped with fresh snapper simmered in a spicy sauce with onions and peppers, jerk chicken with extra jerk sauce on the side, potato salad, and the obligatory mound of coconut rice and beans.

Just as we tucked in to the feast, Robin put a big bowl in the middle of the table. “I don’t want you to say that you came to Robin’s and didn’t try the curry,” he said. A free prize for us because the man was proud of his cooking.

It’s hard to describe the magic of all those tastes and textures on our plates… a magic enhanced by having come out of that tiny box of a kitchen and being served up on that rough roadside table under a palapa in the rain, the bright blue Caribbean foaming on the reef top a few hundred yards off shore.

It was one of those meals, one of those moments, that makes Ambergris Caye what it is and keeps so many people coming back here. We savored every minute of it. In fact, we put off getting back in the golf cart as long as we could, preferring to relax with Robin as he sat with us outside his little kitchen and chatted about his life and his love of cooking.

There is a hustle and bustle to San Pedro Town that comes with its popularity as a tourist and sporting destination. But the laid-back island and everything that makes this relaxed, Caribbean way of life such a dream for so many people is not very far under the surface. In fact, a heaping plateful of it is waiting right under the palapa at Robin’s Kitchen.