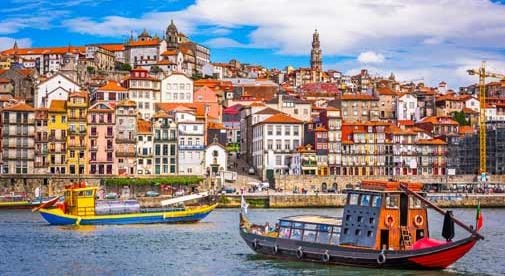 Cruise a river past the terraced landscape of one of Portugal’s finest wine-growing regions. View a Gothic church with 650 pounds of gold plating. Step back in time at Portugal’s best-preserved Roman ruins, and experience interactively the history of the nation’s capital. Stretch out on the sands of the Portuguese Riviera and, atop a mountain in a national forest, embrace Romanticism in a flamboyant palace. Sip award-winning wines, dine on fresh fish and aged beef, and marvel at the variety of breads and pastries available in aromatic padarias and pastelarias. Think you can’t do it all in one week? Read on. 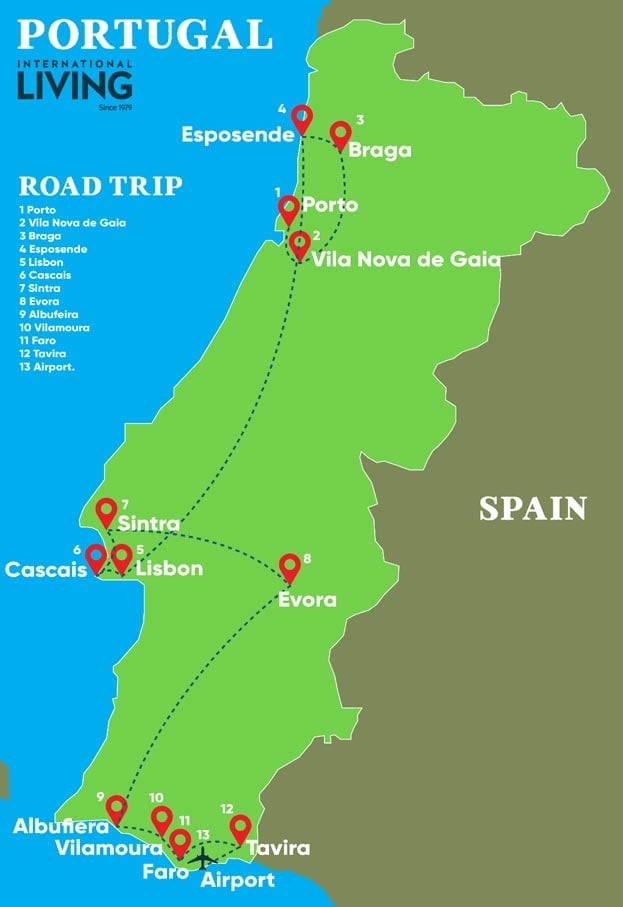 Begin your week in Porto, arranging to arrive as early in the day as possible. Leave luggage at your lodging and head to Rua Santa Caterina. At the church of the same name, you’ll get a dazzling introduction to the classic blue-and-white Portuguese tiles, azulejos. Stroll along Santa Caterina and stop at the art deco Café Belle Époque for coffee. Fifteen minutes away is Lello Bookstore, famed for its legendary staircase, and frequented by J.K. Rowling when she taught English in Porto.

Next, visit the Church of São Francisco, noted for its painted woodwork and all that gold. At lunchtime, stop into Pestana Vintage Porto Hotel’s Rib Beef & Wine Restaurant, featuring a mixology bar and Tomahawk Irish Black Angus. You can work off those calories with a walk to the Douro riverbank, where you may browse for souvenirs at its many stalls and shops. In the late afternoon, cross the Dom Luis I Bridge spanning the river to Vila Nova de Gaia where you can tour and taste at centuries-old port wine houses. Grab some petiscos, the Portuguese equivalent of tapas, before turning in early for a good night’s sleep.

The next day, opt for a relaxing boat cruise through the Douro Valley, including lunch and wine tastings. It might be just the ticket if you have a touch of jet lag. Or experience two new cities:

Drive 45 minutes north to Braga. Close to city center is the cathedral, one of the most architecturally important buildings in the country. Next visit the Residence of the Biscainhos, a former manor house, now a decorative arts museum boasting manicured gardens. When it’s time for coffee and pastry, pop into Centésima Página, a charming bookstore located in Casa Rolão, an 18th-century, Baroque-style house with a garden café.

Esposende is about 30 minutes due west of Braga, situated on the Atlantic Ocean and the Rio Cávado. Stroll the marginal and enjoy a late lunch at one of the inviting waterfront cafés. Afterwards explore the past at Castro de São Lourenço, an archaeological area in Vila Chã. Back in Esposende, finish with an oceanside sunset cocktail before returning to Porto.

Rise early for the three-hour drive south, then begin your Lisbon experience at Castelo São Jorge. It’s a hike to the top, but tuk tuks are available for rent. Roam the ramparts with camera in hand, because here are some of the best views of the nation’s capital. You’ll also want a shot of the outdoor café’s famous locals: a glorious muster of parading peacocks.

The castle is in the city’s oldest district, Alfama, whose Moorish influence gives it a distinct, culture-rich flavor. After lunch at Time Out Lisbon Market, which features many local chefs, head to the Lisboa Story Center. It offers a comprehensive picture of Lisbon from its earliest roots to the present, including a first-hand look at the Great Quake of 1755 which destroyed most of the city.

Just 20 minutes away is a closely grouped treasure trove of sites. Jerónimos Monastery is a prime example of Portuguese late Gothic Manueline style architecture and a UNESCO World Heritage Site. Entrance to the church—housing the sepulchers of kings and discoverers—is free, and there are lovely gardens complete with a grand fountain in front of the complex. Directly across from it stands the Monument to the Discoveries, a towering structure perched on the edge of the Tejo River. The trio is complete with another UNESCO site, the 16th-century Belém Tower, which played a significant role in the country’s maritime adventures. Wrap up the day at Lx Factory. A historical industrial complex open until 2 a.m., it provides a variety of arty retailers and restaurants.

In the morning take A5 west along the Estoril coastline, lined with lovely beaches. Thirty minutes later you’ll arrive at the expat-friendly fishing village of Cascais, filled with restaurants, shops, parks, and more. The bayside 15th-century fortress is now a pousada (historic hotel), perhaps a spot to stay on a return visit.

Your next stop is Sintra. Skip the Moorish castle if you had your fill at São Jorge but do tour the town’s colorful trademark Palace of Pena. It appears as it did in 1910, when a revolution forced the king and his family to flee the country. Time permitting, take in Monserrate Palace, an exotic villa with exquisite grounds, and just one of the other attractions in town. Sintra is packed with opportunities to explore, eat, drink, and shop. It’s also packed with tourists, so be prepared to wait at times. It’s worth it.

An hour and a half east of Lisbon, Évora is the capital of the country’s Alentejo region. Don’t miss the Roman Temple, the cathedral, and the Igreja de São Francisco, a church with an eerie, skeleton-adorned chapel of bones. If you haven’t lost your appetite, go to Fialho and order favada real de caça, a bean stew traditionally served to royal guests after hunting trips, and sopa de beldroegas (purslane soup). Finally, spend the night in Monte do Serrado de Baixo, a B&B in a typical alentejana structure.

Day 6: Albufeira and Vilamoura (One night)

It’s time to experience Portugal’s southern region, the Algarve, and discover why it’s favored by so many expats. After the two-and-a-half-hour drive from Évora, stop first in Albufeira, the Algarve’s largest and busiest city, and book a cruise on a pirate ship for dolphin and whale watching.

Vilamoura lies 30 minutes to the east. Here you can enjoy golf, tennis, boating, or simply loll on a pristine beach. At nightfall, chic bars and a wide assortment of restaurants offer their best.

Day 7: Faro and Tavira (One night)

After breakfast, drive 30 minutes east to Faro. In nearby São Brás de Alportel, you can take a cork factory tour (Portugal supplies 80% of the world’s cork) or rent bikes and tour the countryside.

Tavira is noted for its 37 churches. There’s also an excavation underway in the middle of town, uncovering ruins from the days when it was a Roman seaport. You might want to know, too, that Seville is only 110 miles from here. Sample Spain and return to spend the night at a former 16th-century convent, Pousada Convento de Tavira. In the morning you can hop a flight to Porto if you booked a roundtrip from your point of origin, or simply fly home from Faro International Airport.