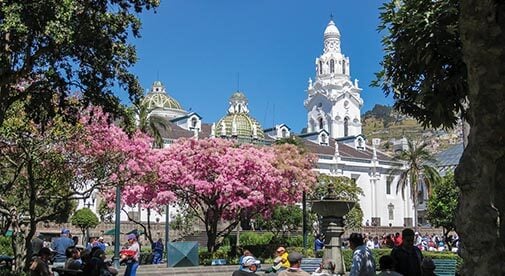 After an initial scouting trip to Ecuador, the Sumples embarked on their globetrotting adventures. ©Nazareen Heazle/International Living

Here’s a question for you to mull over: Is it possible to travel the world and save money?

This was something my wife, Karen, and I began pondering in late January 2017. It all started when a college friend posted images of his travels throughout Central and South America.

“What the heck are you doing these days, Scott, that lets you travel so much?” I asked.

Following an hour of back and forth texts, where Scott shared his remote business model and the choices he’d made to cultivate a traveling lifestyle, I went from dreaming of two-week vacations abroad every few years to pondering the possibilities of taking my freelance business on the road full-time. And it didn’t take much.

Scott forwarded photos of his rental home above Lake Atitlán in San Pedro La Laguna, Guatemala—a beautiful two-bedroom home in the shadow of majestic Volcán San Pedro with a patio overlooking the lake below. It was jaw-droppingly spectacular. When he asked me to guess the monthly rent for this upscale home, I expected he was setting me up to be surprised, so I guessed what I thought was a low-ball number: $1,200.

He was paying less than $600, which included utilities, water, trash removal, and internet, not to mention a maid and gardener coming over a few times a week. Then Scott texted the life-altering statement: “You know, with your jobs, you and Karen could do this, too.”

He was right. Since I was a freelance writer and Karen worked remotely for a company in South Florida, we could work anywhere in the world as long as we had reliable internet. We were already living the remote employee lifestyle since moving from South Florida to Seattle in 2009; we simply needed to contemplate the possibilities of living and working remotely outside the United States.

A year abroad for the price of two months in Seattle.

The wheels were in motion, with one primary thought inspiring us: With a monthly rental budget of $600 like Scott’s, we could spend a year abroad for the same amount we spent in Seattle in two months.

Within an hour of ending my conversation with Scott, I had several windows open on my laptop, searching cost of living info for countries around the world. I stumbled upon two resources that provided a wealth of knowledge.

The first was Numbeo.com, which provides cost of living comparisons between two destinations of your choosing. I plugged in Seattle to see how our current expenses stacked up against other countries. Several were equally or more expensive, which was a little disheartening—but my first round included famous tourist destinations like London, Amsterdam, Paris, Sydney, and Hong Kong. All were dream destinations for us, but each was too rich for our budget.

Then I checked cities in Central and South America. Bam! Bells started ringing and my eyes popped wide open. Depending on the country and city, we could reduce our monthly budget by up to 60% of what we were spending in Seattle.

I was so excited; I could barely contain myself, but Karen suggested I keep digging, which led me to the second valuable resource: International Living’s Annual Global Retirement Index.

While neither of us planned on retiring anytime soon (I was 54, and Karen was 50 at the time), we were looking for information to help us better understand our options. We pored over the 2017 index to determine a potential landing spot, had conversations with expats, researched visa options, and watched numerous travel videos featuring Central and South American living. In October 2017, nine months after talking to Scott, we traveled to Quito, Ecuador, for a scouting trip. 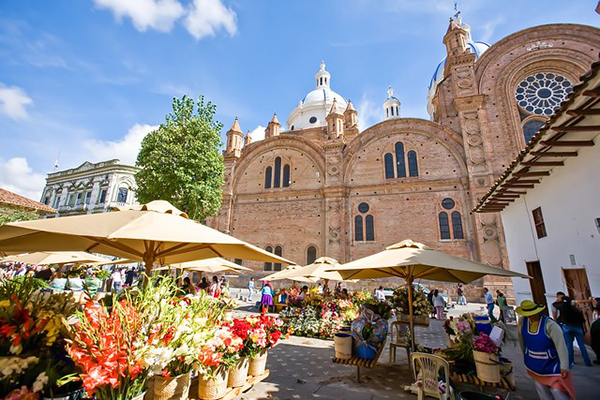 Our initial plan was to stay in a country for an extended period of time, and Ecuador allowed a three-month tourist visa followed by a six-month extension. We figured nine months in a country would allow us to ease into a long-term, slow-travel lifestyle, leaving plenty of opportunities to explore coastal towns like Olón, Manta, and Salinas; the Andean cities of Quito, Cuenca, and quirky Vilcabamba, and the outdoor adventure capitals of Mindo and Baños.

In addition to favorable visa requirements, Ecuador was ideal for other reasons:

• The currency is the U.S. dollar
• Four-hour flight to South Florida for Karen’s biannual office visits (shorter than a six-hour nonstop from Seattle)
• It’s in the Eastern Time Zone, which is the same as my clients and Karen’s office
• Thriving expat communities in Quito and Cuenca
• Low cost of living

The scouting trip was a huge success. We spent time in both Quito and Cuenca and loved the atmosphere in both locations. Quito had the hustle and bustle of a thriving modern city, which we both enjoy. Cuenca was extremely welcoming to expats, with a smaller community feel and handsome colonial architecture in the city center. After 15 days in Ecuador, we were comfortable with the idea of kicking off our journey in a country with 12 hours of sunlight, 365 days a year.

Upon our return, we had conversations with friends, family, and employers to make sure everyone understood why we were doing this. The why was very clear: We both love to travel, and we would save thousands of dollars annually by traveling the world.

As crazy as it sounds, it’s 100% true. We would earn a U.S. income and spend money in countries with a much lower cost of living. This allowed us to pay down debt rapidly, as well as accelerate our retirement savings. Win-win.

Instead of meeting with resistance, nearly everyone was excited for us, including our employers. I say “nearly” because a few folks didn’t understand why we wanted to leave the United States for an extended period of time, which is understandable. We, on the other hand, couldn’t wait to launch our journey in May 2018.

Adaptability Is Essential for Long-Term Travel 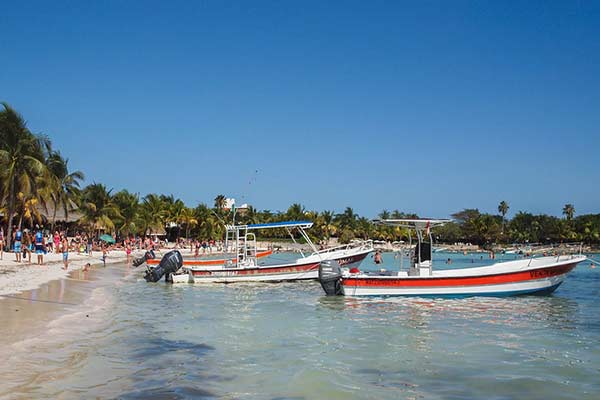 So much for best intentions. Due to a film project I began working on in early 2018, it made more sense for us to stay closer to the U.S. Instead of postponing our travel plans, however, we pivoted.

Friends we made online during our research phase had a rental available in Akumal, along Mexico’s Riviera Maya between Playa del Carmen and Tulum. It was a short hop back to the States, and only 80 minutes by plane to Karen’s company in South Florida.

It wasn’t our original plan, but it allowed us to begin our travel journey with a minimal delay. The new departure date for Mexico: July 31, 2018.

The most important lesson we learned leading up to our departure was the need to adapt to whatever came our way. When you plan on traveling to multiple countries over the course of months, years, or decades, you need to be flexible.

For example, we planned to be in Mexico for five months. After three months enjoying the beaches, seafood, and cenotes in Akumal and Tulum, we spent a month in Mérida, a city that joyously celebrates its Yucatán and Maya heritage.

Then we were off to San Miguel de Allende for a month but extended our stay another 30 days since we fell in love with the light (ideal for photographers and painters), the friendly people, the music (Gil Guitérrez’s guitar playing at Bistro Mi Casa and Zandunga is a must!) and the always endearing charm of this Pueblo Mágico.

Forget the original five-month plan, we weren’t done with Mexico yet. After San Miguel de Allende, we spent two months in Mexico City and Oaxaca, exploring numerous Aztec ruins, wandering museums (Mexico City has more museums than any other city in the world, with the Museo Nacional de Antropología, Frida Kahlo’s Casa Azul, and Museo Soumaya must-visits) and filling our bellies daily with the best food ever.

By the end of our time in Mexico, we’d spent nine months there (a brief visit to the States allowed us to reset the 180-day tourist visa and extend our stay), visiting more than 15 cities along the way.

While our initial plan was to stay longer in the countries we visited, we realized during our time in Mexico that we loved moving around to experience different cities and cultures. We were adapting, and we loved immersing ourselves in a community for a month or two at a time, living like locals instead of ticking boxes as tourists.

In May 2019, we arrived in Cuenca, Ecuador. It was a year later than we originally planned. A lot had changed for us since our early planning days. We’d learned a lot about ourselves as travelers, thriving in our desire to move to a new location monthly. We also discovered that we didn’t like planning too far ahead, wanting to leave room for extended stays in areas we loved.

Our six weeks in Cuenca and six weeks in Quito felt like a repeat trip, since we had already spent time in each city. And while we explored each region deeper and enjoyed our time, we were excited to explore something new.

From Ecuador, we spent five months in Peru, visiting Huanchaco, Lima, Ica, Cusco, and Arequipa, before heading to Reñaca and Santiago, Chile, for six weeks.

We spent a month in Mendoza, Argentina, before moving on to San Carlos de Bariloche in the northern tip of Argentina’s Patagonia region. The goal was to spend a month in Bariloche before venturing further south to explore El Calafate, Torres del Paine National Park, and Ushuaia before heading to Buenos Aires.

Then COVID arrived. The original plan was to continue our journey through South America, visiting Uruguay, Paraguay, Brazil, Bolivia, and Colombia through the end of 2021. But the longer the pandemic extended, it became apparent that ongoing travel in South America would not be a near-term possibility.

Since we didn’t know when the lockdown would truly end, we began searching for travel options outside of South America and were fortunate to secure passage to Edinburgh, Scotland. We were required to quarantine for 14 days, but that was a snap considering our lockdown in Bariloche lasted four and a half months.

We’ve had plenty of time to reflect on our journey so far, and we have zero regrets. In fact, we look forward to traveling more frequently as soon as the world opens up.

Above all, we owe a big “thank you” to our friend Scott. We wouldn’t be where we are today if it wasn’t for his gentle nudge. Hopefully, after reading this, you’ll feel a nudge, too.