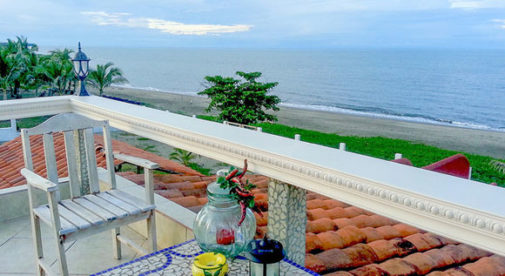 Just off of Panama’s Dry Forest Coast, Las Tablas is Panama at its best. It’s located on the Azuero Peninsula, a region renowned for everything from colorful Carnival celebrations to artisanal textiles, pottery, and leatherwork. Traditions dating back hundreds of years are curated and kept alive by the people here, in what’s known as the cradle of folklore.

A short walk from the main plaza, St. Louis natives Armand and Joyclyn Brodeur rent a small home for $200 a month. During their first month in Las Tablas they paid $600 for a small apartment. It was ready to move into and in a central location, so it worked while they were getting settled. Soon, however, they were ready to try a local-style home. After a bit of networking, an expat introduced them to a local homeowner and the next thing they knew, they were signing a new rental agreement.

They enjoy their new home immensely. “The day starts with Panamanian coffee—usually on the front porch,” says Armand. “We have a papaya tree in the backyard and have fresh papaya regularly for breakfast.” It’s a simple, effortless lifestyle.

In the Pedasí region, about 45 minutes away, you’ll find some of Panama’s most pristine beaches. Not to mention, the fishing is legendary. But the ocean-loving Brodeurs don’t have to go far to get their fix. The craggy shores of Uverito beach are mere minutes from the Las Tablas town square.

The Brodeurs chose Las Tablas to test-drive their retirement in Panama, so to speak. Both Armand and Joyclyn wanted a tropical, beachy lifestyle. They also wanted a place where it would be possible to live on a social security check. “Las Tablas fits the bill,” they say, citing the excellent infrastructure and affordable healthcare.

Las Tablas: So Much More than Panama’s “Cheapest Place”

Las Tablas is the perfect small town—it sits less than an hour from the growing city of Chitre, where you’ll find everything from large supermarkets to hospitals. Neighboring Pedasí boasts cute little restaurants and is the launch point to everything from the nation’s best surfing and diving to eco-tourism.

Every year, in the four days preceding the Catholic Lent, swarms of locals (and foreigners, too) flood Las Tablas. The main square becomes party central, and massive cistern trucks shower dancing crowds with cool water. At night, fairy-tale “queens” and “princesses” make their way down the main drag in fanciful floats.

The Azuero peninsula is said to host some 700 festivals a year. If you want to be immersed in Panamanian culture, this is the place to do it. And all in a town where simple homes start around $45,000, and you can fill a basket with fresh mango, bananas, pineapple, passionfruit, and more for less than $10.

Here’s a sample monthly budget for a two-person household in Las Tablas:

You’ll need to also take into account transportation, entertainment, and any special hobbies or needs you may have (especially medical or insurance needs, which vary greatly from person to person).

But in Las Tablas, you could eat out several times a week on simple local fare, and spend less than $150 in a month. At the Cine Moderno theater in Chitre, you’re likely to spend less than $10 on your movie tickets and snacks, and at the nearby nine-hole golf course, green fees start at about $5. Car maintenance is up to 50% cheaper than the U.S., while taxis rarely charge more than $2. So go ahead, live it up! You’re unlikely to spend more than $1,500 a month, no matter how hard you try.