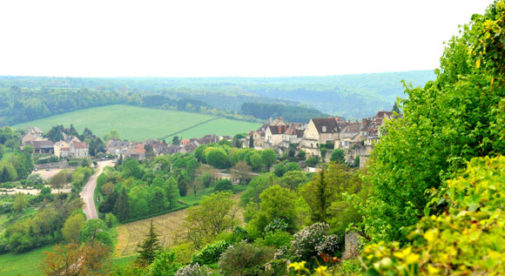 France has thousands of rural towns and villages. While I can’t say that every single one will blow you away with charm, it seems that the country hosts an exceptionally high number of rural beauties. Here are three great rural towns to add to your must-see list:

Vézelay is home to the Basilique Sainte-Marie-Madeleine, an impressive, light-filled 12th-century basilica that has, since the Middle Ages, marked the starting point of the famed “St. James Way” pilgrimage route, which stretched from central France to Santiago de Compestela in northwest Spain.

The vast Romanesque-style basilica and the “eternal hill” on which it sits justly attract the lion’s share of visitor attention. But I find the town’s little side streets and local architecture equally charming. Everywhere you look is centuries-old exposed stone houses with beautifully intricate wrought-iron gates and window shutters painted in a pleasing grey-blue known throughout the region as “Vézelay grey.”

Two things not to miss: After a visit to the basilica, head to the leafy park just behind it. There you’ll find a wide stone terrace that offers phenomenal views of the cascading hills and rich colors of the Burgundy countryside.

Next, once you’ve come down the hill, pay a visit to one of the local wineries to taste some of Vézelay’s finest. Domaine Camu, for example, offers a range of Vézelay wines, from Pinot Noir to Chardonnay for $8 to $13 a bottle.

Despite its tiny size, Camembert manages to play host to a sizeable museum, split in two. First there’s the Ferme Président (entrance: $6). Set in a pretty half-timbered 18th-century farmhouse, this museum, among other things, retraces the legendary history of the cheese, which was purportedly born when a priest from Brie, fleeing the French Revolution, shared with Marie Harel the recipe for Brie, which she modified to create the Camembert we know today.
The second part of the museum is the Maison du Camembert, which is amusingly set in a round, white building that resembles a half-opened box of Camembert. It’s here where you can have tastings of Camembert at its various stages of maturity and buy cheese rounds and other Norman produce to take home—or even better, to feast upon with a baguette and bottle of apple cider in one of the nearby meadows.

Settled in the 6th century by Saint Romain, Druyes-les-Belles-Fontaines (Druyes, the beautiful fountains) was named for the marvelously clear spring that runs through the village to this day.

With its classic houses of local stone and the swans drifting in the spring’s basin, Druyes is pretty enough to enchant visitors with no further attractions. But on a limestone ridge above the village sits the remains of a 12th-century stone fortress, Château Druyes. Now little more than massive ramparts and towers, the château was once a key stronghold in the region.

Walk the steep slope—or drive—to the fortress from the lower village. Exploring its old stones and twisting staircases wonderfully incites the imagination about the castle’s glory days. Equally appealing, the château towers yield spectacular views of the slopes of the Burgundian landscape, as well as a 19th-century arched stone aqueduct (now popular among the French bungee-jumping set) that spans it. It’s well worth the $10 entrance fee.