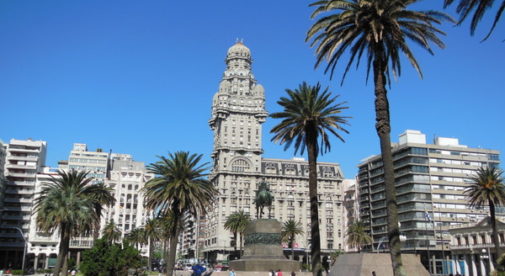 It’s a sunny morning, and you have plans to meet friends at a nearby café. You go down the elevator and are greeted by the porter on your way out. Your little studio apartment is a building near the corner of 21 de Setiembre and Ellauri in the neighborhood known as Punta Carretas in Montevideo, Uruguay.

It’s just one block to a beautiful park where a farmer’s market sets up Saturdays and Tuesdays. Within a seven-block radius are more than a dozen top-tier restaurants. Places like La Perdiz and Francis, which serve a tasty variety of grilled meats, seafood, and pasta dishes.

Also close by, is a high-end shopping mall with multiple cinemas. You’ll find a riverfront park with soccer fields and a trail leading to a lighthouse. There’s also an exclusive 18-hole golf club where non-members can play free every Monday.

Uruguay is a small country with 3.4 million people. Montevideo is Uruguay’s capital city on the Rio de la Plata (River of Silver). About half of Uruguay’s total population live in Montevideo.

Calle 21 de Setiembre is a landmark street in Punta Carretas. It’s lined with apartment towers, shops, and cafes. One cafe with a great bakery is Amaretto—a popular place to meet friends for both expats and locals.

Just steps from the Rambla, the riverfront promenade where people meet to walk, run, ride bikes, or fish in the mornings and evenings, you can find one-bedroom apartments. You are also close to the park and within walking distance to good restaurants and shopping. You’re just a block from the riverfront on 21 de Setiembre, and can see the river from the balcony. Pricing starts at just $140,000.

If you prefer a Punta Carretas apartment with a little more room, you’ll find two-bedroom, one-bathroom units. I found one that comes with an additional service bedroom and bathroom—a maid’s quarters. If you don’t need a live-in maid, this could be an ideal space for a home office or cozy guest room. This fifth-floor place also has a terrace and comes with a parking space and it’s priced at $249,000.

All three of these modern and convenient Punta Carretas apartments are close to bus stops. Montevideo has frequent and well-routed city buses. For less than a dollar, you can catch a bus to Montevideo’s Old City and Centro. There, you can watch street tango in Plaza del Entrevero on Saturday afternoons. You can catch a play in one of the small theaters. Or experience an opera or ballet at the Adela Reta National Auditorium.

You’ll also find plenty of interesting getaways near Montevideo. Take visiting nearby wineries as an example. Uruguay is becoming known for great wines. You can join a wine tour from Montevideo to the Uruguayan countryside. One winery close to Montevideo, which produces some of Uruguay’s finest wines and has a restaurant with excellent food, is Bodega Bouza. And it’s close enough to visit in a city taxi.

For a big-city weekend, many Montevideo residents go across the Rio de la Plata to Buenos Aires, Argentina. It’s just a 30-minute flight from Montevideo airport or a two-and-a-half-hour ferry ride from Montevideo’s downtown.

During the Southern Hemisphere summer (January and February), many Montevideo residents head east along the coast to spend a few weeks in one of Uruguay’s many beach resort towns. In the winter, they’ll take a holiday to one of the many hot spring resorts in Northern Uruguay, near the city of Salto.

Montevideo is a great city and there are many neighborhoods I recommend you visit. However, it’s my opinion that Punta Carretas and the surrounding communities offer expats the best quality of life for their money.