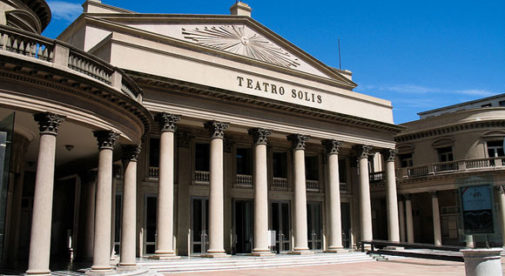 Somehow, in my adult life, I developed the belief that I needed money to have a good time. However, living in Montevideo reminds me that’s just not so. Here, there are so many public spaces, celebrations, and ways to socialize… all for little or no money.

In fact the idea that the good things in life should be available to all is so important to Uruguayans that they dedicate a whole weekend to it every spring. For that entire weekend (to celebrate Dia de Patrimonio—Heritage Day), all public buildings, theaters, museums, and galleries are open to the public at no cost. During the most recent Dia de Patrimonio in Montevideo, Uruguay’s capital, I climbed to the top of a lighthouse, explored the Parliament building, attended a play, and rode a train along the port’s waterfront—all for free.

If the beach is more your scene, you’ll be glad to hear that all of Uruguay’s beaches are public—including the wide sandy beaches of Montevideo along the Rio de la Plata (River of Silver).

In summer, people from all over the city come to sunbathe or take a dip.

Though the largest summer crowd is at Pocitos Beach, on the coastline of Montevideo’s densest residential neighborhood, my personal favorite Montevideo beach is Ramirez. At Ramirez beach, you’re in close proximity to some of the best free amenities that Montevideo has to offer. Just west of Ramirez beach is a free public roller-skating rink. To the east there are small fishing clubs. Across the street is Parque Rodo, a large park with trees, fountains, sculptures, pleasant avenues to stroll on and a pond.

If the walking avenues of Parque Rodo don’t provide you with the level of activity you need, check out the “rambla.”

Stretching the full length of Montevideo’s varied coastline, this promenade is where I like to go running in Montevideo. When I do, I usually share it with walkers, cyclists, and rollerbladers. (The rambla offers benches, too, for when you need a rest from all that activity… or just time to sit and watch the world go by.)

While it is common for friends in Montevideo to meet for lunch or coffee to socialize, it is also common to meet at the rambla, a plaza, or a park to chat and drink yerba mate. This popular tea-like drink is associated with friendship. It is drunk from a hollow mate gourd with a metal straw called a bombilla. Meeting at the rambla, drinking yerba mate, and trading notes with friends is a very common (and free) way to spend an afternoon here.

A fan of golf? That can be done for free in Montevideo, too. Just south of Ramirez beach and Parque Rodo is Club de Golf del Uruguay, an 18-hole golf course in the middle of the city. It’s an upscale place with a five-figure membership fee. However, anyone can come to the club and golf for free on Mondays—it’s a requirement enforced by the municipality in exchange for the club using public property.

Frugal music fans are well-catered for in Montevideo also. During the spring and summer months, there are plenty of free outdoor concerts. Musicians perform from temporary stages set up in parks, near the beach, and other public spaces—playing tango, pop, electronic, show tunes, and classical music to the masses.

About a month ago, I went to hear Uruguay’s National Symphony Orchestra perform free in the large open area in front of a municipal building. The performance and sound quality was world-class.

Outdoor displays are never-ending either. From spring until fall, there seems to be one celebration after another. At Christmas and New Year’s Eve (which both fall during Uruguayan summer), the entire coastline of Montevideo becomes a spectacular firework show. Then comes Uruguay’s 40-day Carnival celebration. The world-famous parades and street performances: free—like all the best things in Montevideo are.