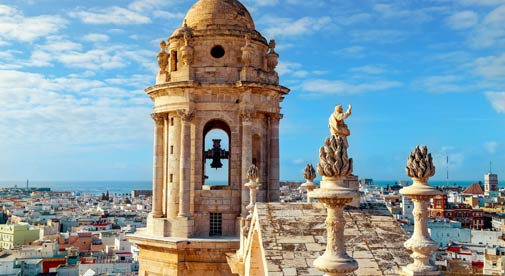 Cádiz, Spain…where ancient relics meet modern flair. Located in the southwestern corner of the Iberian Peninsula, between the Mediterranean Sea and the Atlantic Ocean, Cádiz was founded in 1104 BC by the Phoenicians and is part of the community of Andalusia. Tree-lined plazas, beachfront restaurants, tapas bars, and historical buildings dot the landscape. Cádiz offers something for everyone.

For an inexpensive day in this charming port city, I recommend this list of free, or close to free, places to visit in Cádiz.

This large authentic market in Plaza Libertad is filled with stall after stall of fresh fish, produce, cured meats, and seafood. The Neo-Classical 19th century design mixed with all the colors, chatter, and people is a feast for the eyes. Locals and tourists alike browse through the locally grown produce, buying their meat or fish for dinner, milling through the many rows of locals selling their wares. There is also a cafeteria and several places to get a drink. You can find the makings for a perfect picnic lunch or dinner here but the mercado is also great for simply strolling through to people watch. It’s free and it really gives you a sense of living in a southern Spanish coastal city.

Ok, so this one isn’t entirely free unless you go on Sunday before Mass, but it is very cheap at only $5.63. The hallmark of the city center is this wondrous and ornate Catholic Church. The church sits in Plaza Catedral, just a few minutes’ walk from the Mercado Central, and is a massive structure. One side is on a coastal road while the front sits facing into the large, open plaza. The cathedral was built between 1722 and 1838 and took 116 years to complete, so the mix of design styles from Baroque to Neo-Classical is evident. The audio tour is long but explains all the history and artwork as it guides you through the nave, chapels, and crypt. The entrance cost includes the audio tour, a tour of the various rooms, a tour of the crypt, and admission to climb the bell tower. The climb is challenging but the views are breathtaking and worthwhile.

La Caleta sits in the center of two fortresses and amid the rooftop cityscape of Moorish buildings. The main street runs along the beach, filled with modern restaurants and tapas bars. Small fishing boats line the shore and bay, reminiscent of a native fishing community. Locals walk along the beach with their children or enjoy a cerveza at one of the beachfront cafes. In the center of the beach, there is a bathhouse with restrooms, and changing area. La Caleta is a popular metropolitan beach with a unique feel and a great place to relax and take in the seaside Spanish ambiance.

This 16th century fortress is the smaller of the two that stand like bookends to Playa de la Caleta. The star-shaped structure was built to guard the city against the British and Dutch. Small local fishing boats decorate the waters surrounding the fort. Inside the walls, you will find a quaint little chapel and barracks. Other rooms are currently used to house art exhibits. While there is not a whole lot to see inside the fortress, the sweeping views of the ocean and shoreline are spectacular. The entrance is free so if you are a history buff, this fortress is a must-see.

Built in the early 1700’s to defend the northern flank of the city, this fortress sits majestically out in the harbor as a beacon of Spanish history. The one-mile long causeway leading to the gate of the castle is best approached during low tide, when the stones and rocks bordering the walkway are visible and reachable. The Moorish style castle has remnants of a watchtower from the Muslim period. Unfortunately, San Sebastian is currently closed for renovation but when it is open, there is no cost to enter. But the views are so stunning that you can still enjoy a visit.

Walk Amongst the Ruins of Teatro Romano (Roman Theatre)

Built around 70 BC, the partially excavated ruins of the Roman Theatre are just a few minutes’ walk from the Catedral. Discovered in 1980, it is said to be one of the largest theaters ever built in the Roman Empire. The horseshoe auditorium and parabolic tiered seating are reminiscent of the archaic theaters of Rome. I found myself mesmerized by the historical significance of the ruins, thinking how it would have looked in its full glory. There is no cost to walk through the ruins.

If you are ever in the area of southern Spain, Cádiz is a gem of a city and a must on your day-trip list.

6 Incredible Places to Visit on the Iberian Peninsula