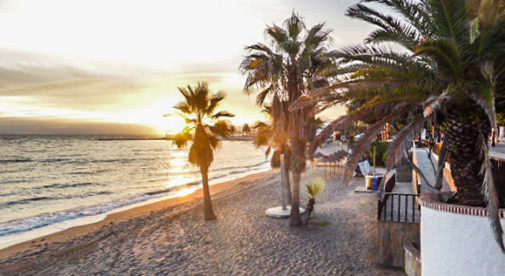 The southern province of Andalucia, particularly the area around the Costa del Sol, is the epitome of good-value, romantic Spanish living.

It has everything: long sandy beaches perfect for strolling on…romantic, white-washed hill towns cling to the Andalusian hillsides…a sunny climate where snow and even rain are a rarity…and a cost of living so affordable you’ll find it hard to believe you’re in a European country.

You’ll share a three-course meal with a friend for as little as $22, rent from $540 a month… All told a couple can live comfortably on $2,000 a month—and that includes the costs of exploring all the country has to offer.

Southern Spain is most famous for its beaches and resort towns. If you’re a beach lover, you’ll find plenty of options for beachside living. Marbella is the glitzy heart of this stretch of coastline, attracting tourists and the wealthy jet set from around the world.

It has restaurants offering cuisines from around the world, lots of boutique clothing stores, and a pretty Old Town that’s a pleasure to ramble through. Despite its glamorous reputation, Marbella is still affordable. You can buy two-bedroom apartments, about a 10-minute walk from the town’s popular beach, from $157,000. If you’d prefer to be closer to the sea, you’ll pay around $225,000.

Although I love the beaches of the Costa del Sol, it’s the area’s mountain towns that really charm me.

Just a short drive from the coast, hidden among the green hills, are some of Spain’s most enchanting and affordable towns. My favorite was Mijas. This “white town” (pueblo blanco) sits on a hilltop 20 minutes from Malaga. Founded in the second century, it’s held onto its traditional Andalusian atmosphere: narrow cobblestone streets, crammed on either side by whitewashed stone buildings. Many are boutiques, local artisan jewelry stores, and expat-owned chocolate shops.

The cherry on top of this cake is the cost of real estate. I found a two-bedroom, two-bathroom apartment with a terrace, a short walk from the town center for just $92,400. Rentals are equally good value. A two-bedroom apartment in the heart of the village can be yours for $565 a month.

Another of this area’s mountain towns that stole my heart is the peaceful pueblo of Torrox. It’s the kind of place where time stands still. The quaint village square, Plaza de la Constitucíon, is lined with orange trees, their faint scent filling the air. Here locals sit in cafes or on one of the many wooden benches to watch the world go by. The town hall stands proudly at the end of the square, its green shutters a colorful contrast to its brilliant white walls. Life in Torrox is easy and serene.

The price of a new home in Torrox will also be easy on your pocketbook. Currently a three-bedroom apartment, right near the main square, with its own terrace is on offer for just $107,700. A townhouse with three bedrooms and two bathrooms in 1,400 square feet of living space can be rented on a long-term basis for $540 a month.

As I’ve mentioned, real estate isn’t the only thing in southern Spain that’s good value. The food, in particular, is great value. My favorite dining experience was a three-course meal of crispy deep-fried Camembert, a Mediterranean fish bisque, followed by warm chocolate cake smothered in cream for just $16.

The perfect end to a serene day in southern Spain.