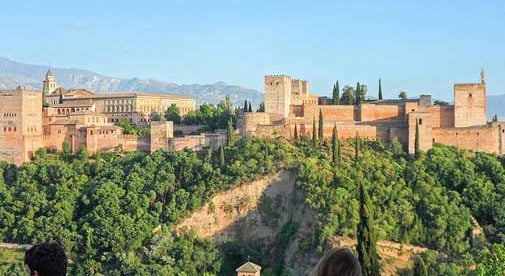 From towering mountains, lush valleys, and thick forests to arid desert, azure beaches, and historic cities: Spain truly has all that you could wish for. It is also home to different cultures, each with its own history and unique style.

Spain sits with almost 800 miles of coastline on the Mediterranean Sea. But, while the Mediterranean beaches are beautiful, Spain also features dramatic cliffs reminiscent of Ireland’s famed Cliffs of Moher at its northern coast on the Cantabrian Sea.

Personally, I am a fan of the warm winters and sun-soaked summers that the southern coast offers. However, if you’re looking for a place that gets a little chillier in the winter, the north of Spain is known for its rich green landscapes and colder winter months.

The plains in Spain don’t disappoint either, stretching across the midsection of the country. The north of Spain is filled with lush forests of Eucalyptus and Pine that cover the miles of tall mountains and steep valleys. Meanwhile, the south features soft, rolling hills populated with olive groves and almond blossoms.

When choosing a place to live in Spain, you’ll also have plenty of variety. Sleepy villages are nestled into mountain ranges like the Alpujarras in Andalusia, or the Picos de Europa in Asturias. Here, you’ll feel like you’ve stepped back to a much simpler time and quieter way of life. There are also many coastal towns that have the same relaxed, quiet atmosphere.

On the other hand, if you’re looking to be in the center of the action, Spain has plenty of up-and-coming neighborhoods in its major cities that are prime spots for those who love city life. Well-known cities like Barcelona, Madrid, and Valencia offer the best of city living, including a variety of apartments and homes to rent or buy in neighborhoods that get you close to everything you need. You’ll also find numerous dining options, as well as theaters, opera, modern shopping malls, movie theaters, and beautiful, historic buildings and monuments to tour.

If it’s history and culture you’re after, Spain is also home to cities like Granada, Ronda, Sevilla, and many others that highlight the influence of Moorish culture in their historic architecture. The modern cities of Castilla y Leon feature dozens of ancient castles, many of which are still intact.

Spain is also home to a wonderful variety of foods. Different types of cheese, wine, and other home-grown foods are readily available in grocery stores, at prices that you will never see elsewhere. A good wine costs less than $15, and a monthly food bill for two people would normally be less than $350.

When it comes to dining out, you’ll find everything from typical Spanish foods to all-American burger joints, Chinese, Japanese, Indian, Italian, and more.

Yes, Spain is truly a blend of the best kind, offering variety in nearly every part of life. It gives you all the options you need to find your perfect home.