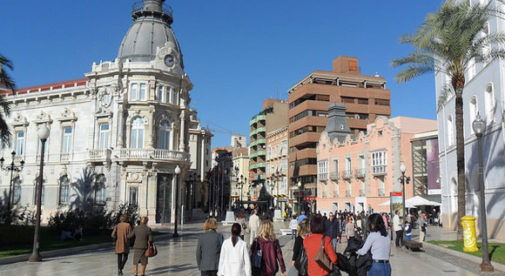 Not needed: Coat, scarf or sweater.

But some sun-block would be welcome. Early December and the afternoon temperature is nudging 70 F. Sunbathers are on Isla Plana’s beach, and children are building sand-castles. I can even see swimmers.

A blue sky, blue-water scene is unremarkable in the tropics. But this is Europe. I’m in southern Spain, on Murcia’s Costa Cálida—the “warm coast.” Whoever thought up the name wasn’t exaggerating. Summer temperatures soar above 90 F, and there’s an annual dose of at least 320 days of sunshine.

Some of Spain’s finest beaches…pink flamingos and therapeutic mud baths…steeped-in-tradition towns…all reasons to put Murcia in your “European escapes” notebook. But these are not the only ones.

In small towns inland, prices are often half that. Within a short drive of beaches, some two-bedroom terraced houses that have never been occupied cost less than $64,000. Spain’s property crash has left the market down by around 40% from its heyday—sometimes more.

With banks offloading repossessions and developers slashing prices, almost every “for sale” property throughout the country is negotiable.

But fire-sale prices won’t last forever. Although relatively unknown at present, Murcia looks a good bet for the near future. For one thing, a new international airport at Corvera opens this summer. Although there’s currently a tiny local airport for budget carriers, flights aren’t frequent. My best option was to drive from Alicante airport, over the regional border in Valencia.

Another compelling reason is that Murcia has been chosen as the site for Europe’s first Paramount theme park. Last December, final planning permissions were given—all systems are now go for the 2015 opening. The park will be near the new airport, but many coastal locations are within a 30-minute drive.

It’s estimated both projects will boost Murcia’s visitor numbers by 5 million annually. With around 20,000 employees needed for the two sites, demand for accommodation will increase. Property values are at such rock-bottom levels, it’s hard to see how they can’t rise.

Between Andalusia and Valencia, Murcia is a secret region known only to the Spanish. Foreign vacationers go farther south to the Costa del Sol or north to the Costa Blanca.

So much of Mediterranean Spain is forested with concrete. But except for La Manga’s high-rise tower blocks, that’s not the case in Murcia. Along its 150 miles of mostly unspoiled Mediterranean coastline sit a handful of seaside towns, but they aren’t over-built.