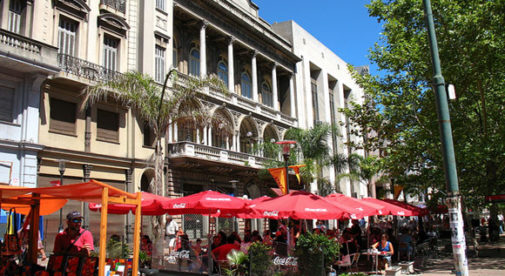 Since becoming an expat, my behavior has changed. I don’t greet friends with a handshake anymore; I kiss them on the cheek. I don’t rush through meals but take my time to enjoy them. I love to meet friends for coffee in sidewalk cafes. And in my idle moments, I often toy with the idea of buying a motor scooter like those I see the locals riding…

Though it may sound like a laid-back European lifestyle, I don’t live in Europe.  Rather, I live in Uruguay, a South American country where 90% of the population has European ancestry. Most came from Spain, France, and Italy—and the culture those settlers brought with them has not just survived but thrived in Uruguay ever since.

The Spanish, who colonized much of Uruguay, are responsible for the typical layout of most Uruguayan towns. They platted towns on the Spanish model with a church and a central plaza, which usually features a monument or sculpture, a grassy area, and sometimes fountains and trees.

These plazas are still an important part of Uruguayan life. The locals congregate frequently on them for community festivals, events—or just to socialize. On Saturday afternoons in Plaza del Entrevero (located in Uruguay’s capital, Montevideo) couples often come to dance the tango.

Besides the typical town layout, the Spanish influence is still strongly felt in Uruguay. About a third of Uruguayans have Spanish surnames, thanks in large part to the centuries-long waves of Spanish immigration here.

But Spain is not the only European country to have shaped the culture of Uruguay.

About 10% of all Uruguayans have French ancestry. At the turn of the 20th century, most educated Uruguayans spoke French and followed French fashions.

Today, baguettes and small croissants (called medialunas) are a regular part of the Uruguayan diet. Steak and French fries are a long-standing Uruguayan dinner classic. I had my first ever crème brûlée—the iconic French dessert—ceremoniously flame caramelized at my table, in a restaurant in Maldonado, Uruguay. You’ll find this treat on the dessert page of many Uruguayan menus.

But more than the Spanish or French, it’s the Italian immigrants who made the deepest cultural mark in Uruguay. It’s estimated that 45% of Uruguay’s total population has Italian ancestry—rising to 65% in Montevideo, Uruguay’s capital. The Italian influence is so strong that even though the Spanish language is the national language here, it’s spoken with an Italian intonation.

Italians have been coming here since Uruguay first became a state, but the greatest numbers crossed the Atlantic between 1870 and 1930—and designed and constructed much of the impressive architecture still seen in the country today.

Italian food in Uruguay is plentiful. There is pizza, spaghetti, milanese, risotto, and gnocchi (a potato pasta). My personal favorite is squash-filled ravioli… with a handmade Italian ice cream as dessert.

And the wine flows as freely here as it does in Europe, thanks to the wine-making skills brought here by the immigrants. Today, there are 3,500 grape growers and 270 wineries in Uruguay. Most are family owned and make wine using European methods.

Uruguay also maintains its European music and performing arts traditions. An evening at the symphony or the ballet or the opera… makes for the perfect after-dinner entertainment.