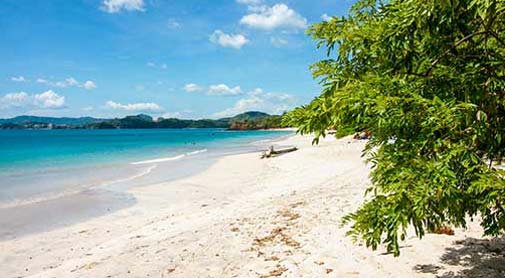 Considered to be one of the most exotic and prettiest beaches on the Costa Rican Gold Coast, Playa Conchal, which means “shell beach,” is located on the northwest Pacific coast of Guanacaste, approximately 25 minutes’ north of Tamarindo and just south of Flamingo. If you fly into Liberia it is less than an hour away and approximately a four-hour drive from San Jose.

This one-and-a-half-mile beach was named Conchal because the sand consists of finely ground shells, which feel like sand, but does not stick to your wet skin in the same manner as regular sand. These white shells sparkle like diamonds in the sunshine. In contrast to the white sand, the water is turquoise-blue in color, deceiving visitors into believing they are on the Caribbean coast.

Many beach-goers enjoy snorkeling because of the clarity of the water and the gentler waves compared to some of the nearby surfing beaches. The tropical fish in this area are stunning and occasionally you can see sting rays swim nearby. The water is a comfortable temperature for swimming year-round. Since Guanacaste is the most arid province in the country, Conchal enjoys more sunshine than most of the coastal areas to the south. Typically, without a drop of rain December through May and only stray afternoon showers May to August.

There is not actually a town called “Conchal,” which is unusual compared to many of the other popular beaches. The closest town is about a half-mile away in Brasilito. Visitors used to be able to drive along the beach from downtown Brasilito to Conchal. However, the municipality has closed the road to vehicular traffic, so the only way to get to the beach from town now is to walk.  The lack of cars and number of people has now created a beautiful tranquility to Playa Conchal.

Although the “town” of Conchal is nonexistent, there are several expats who live in Reserva Conchal. This development consists of an enclave of high-end townhouses, stand-alone homes, and condos in different “neighborhoods” situated around an Audubon-certified, Robert Trent Jones II 18-hole golf course—one of the top courses in the country. In fact, it was the chosen course for the Latin American PGA Costa Rica tour from 2017 to 2019. The development also boasts an all-inclusive luxury Westin hotel, and the first W Hotel in Costa Rica, and true sustainability with a reverse osmosis desalination plant for the entire community.

Conchal is also located within an hour of several national parks and most outdoor activities synonymous with Costa Rica; such as ziplining, horseback riding, sailing, diving, nature hiking, birding, and deep-sea fishing, etc.

If you are looking for a golf community type of lifestyle with all the creature comforts, extravagance, and security of North America, Conchal might be of interest. Members of the posh beach club (located on the shores of the Pacific Ocean directly on Playa Conchal) have use of a fitness club, tennis courts, miles of hike and bike trails, plus discounts at the hotel’s 13 restaurants and bars.

The closest major medical facilities, both public and private, are in Liberia, which is about an hour’s drive from Conchal. Liberia is also the main hub for major shopping such as home furnishings and home improvements, auto dealerships, etc. The city also possesses an immigration office, driver’s license office, annual car inspection facility, major provincial capital government offices, and the country’s second international airport, rebranded as Guanacaste International in 2021 (Airport code: LIR), thus, making trips all the way to San Jose unnecessary to conduct business or shop. If you do not own a car, Conchal is on the bus route to Liberia and south to Tamarindo.

For day-to-day living, everything is within 30 minutes or less. The area’s most comprehensive 24-hour medical clinic which has a lab and x-ray machine is 10 minutes away in Huacas, as well as the regional Hospital Metropolitano in Huacas, which serves Medismart members in a discounted medical plan. And banking can be done in Playa Flamingo, just a five-minute drive away. Smaller grocery stores and pharmacies are in nearby Brasilito and Flamingo—plus larger grocers: Super Compro in Huacas, Mega Super & Maxi Pali in Villareal, and AutoMercado in Tamarindo for most specialty items.

Reserva Conchal is a family-friendly community within five minutes of Guanacaste’s two well-respected international private K-12 schools—CRIA (Costa Rica International Academy) and La Paz. Expats are attracted to Conchal specifically for the amenities, security, cleanliness, the beach, eco-friendly building materials, and water usage, and its proximity to everything the Gold Coast has to offer. If you choose to live here it is suggested to own a car, quad, or some sort of vehicle to drive to the nearby towns for access to shopping, medical clinics, and general commerce.

It is nearly impossible to know the exact population of Conchal, since it is not an official town and they do not have census numbers. Of the over 160 current residents in Reserva Conchal, the mix is estimated 85% gringos and 15% ticos (Costa Ricans). Many homes and condos here are used as a second home or a vacation rental investment.

Cost of Living in Playa Conchal

Housing options include furnished condos (many with ocean or golf-course views) starting at $345,000 for a one-bedroom, from $400,000 for a two-bedroom, and $475,000 to $625,000 for a three-bedroom. Three of the neighborhoods have luxurious ,free-standing, four-bedroom homes ranging from $900,000 to $1.7 million. Three-bedroom townhomes are in the $650,000 range. HOA fees range from $385 to $500 a month and include security, common grounds and pools maintenance, water, and garbage. Beach club membership is $150 a month and includes a discount of 25% off food and spa. There are currently very few lots still left unsold. But the complex could be further repurposed for building if the demand is there.

Except for high season (which includes Christmas, New Year’s, and Easter week), short-term rentals are easy to find in Reserva Conchal, as many places were purchased as rental investments. Rentals are furnished and typically include utilities. Longer-term rentals may be more challenging in the current market since owners prefer the income from short-term pricing, but may look something like this: For example, a two-bedroom, two-and-half-bathroom rents for $2,900 a month, and a four-bedroom would be in the $4,000+ a month range. Please note: In nearby Brasilito you can rent in the $700 to $1,200 range bringing down your monthly expenditures significantly.

Monthly Budget Breakdown for a Couple in the Upscale Reserva Conchal Development: