Nosara is an idyllic Pacific beach town located on the Nicoya Peninsula in northwestern Costa Rica. As the saying goes in Nosara:–no shoes, no shirt, no problem—it’s a laidback place to live. The Nicoya Peninsula is one of only five Blue Zones in the world, and Nosara is included in this. As defined by National Geographic, a Blue Zone is a region of the world where people live much longer than average—these areas have more centenarians than anywhere else. Living longer here is attributed to natural eating habits, physical lifestyles, strong familial bonds, and good friendships.

Nosara town has grocery stores, pharmacies, a post office, a police station, a clinic, and a small airport. As one of the last beach destinations in Costa Rica with unpaved roads leading to it, it has traditionally been kept a hidden gem as tourists tend to flock to the more accessible Gold Coast to the north. The local economy here offers well-paying jobs in the tourism and crafts industry and crime is almost non-existent. Nosara is also a perfect place for expats who want to escape the brutal winters of North America, with average tropical temperatures of 75 F to 90 F.

The main beaches in the area include Playa Guiones, a surfer’s paradise, and Playa Pelada, a scenic family beach. Playa Ostional further to the north is the main nesting beach for the endangered Olive Ridley sea turtles, and is protected in the Ostional National Reserve. Most of the expat communities, homes, and developments are in Guiones and Pelada.

As this area is surrounded by the Nosara Biological Reserve (over 90-acres), the zoning will never change to allow the sort of development seen elsewhere in popular beach towns in the country. And the nearby mangroves, dry forest, and beaches are passionately protected by Nosara’s residents. This lack of development directly on the beach makes Nosara desirable for locals and visitors alike. 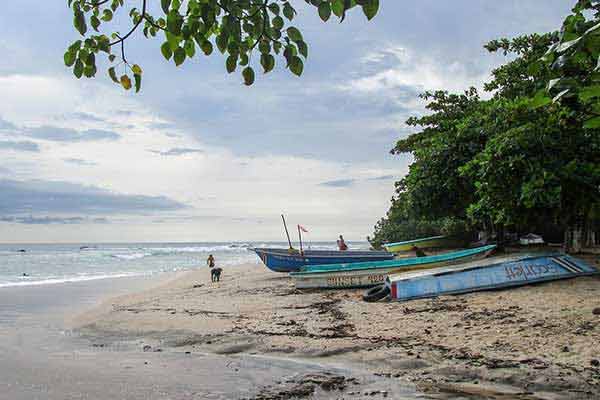 The family-friendly expat community here is proactive about protecting the land and nature, and work hard to keep the beaches clean of any debris. There is also a focused effort for ecotourism, sustainability, and recycling. These attributes set the stage for exemplifying how a community can work together. The Nosara “Blue Zone” lifestyle and vibe has become a dream come true for hundreds of expat families who choose to live a tranquil and relaxed lifestyle overseas. Parents can immerse their children in a more organic way of living within nature, while taking advantage of bilingual school options and learning about a different culture.

Nosara is known mostly for perfect surfing conditions on Playa Guiones. Guiones is one of the only places anywhere in the world where you can surf consistent waves, all day, every day, regardless of the tide. The sand bottom and the tidal range create an ideal situation for any level of surfer. There are dozens of surf schools in the area with instructors for every level. And, with a perfect water temperature of 75 F to 85 F year round, there is never a bad time to hit the swells.

The expats in Nosara tend to be spiritual and adventurous. Yoga, meditation, and wellness centers are a huge part of the relaxed Blue Zone vibe here. If you are looking for a yoga retreat, or you want to adapt a healthier option for your mind, body, and soul, you don’t need to look any further than this laidback town. Besides the dozens of options for every style of yoga, the world-renowned Nosara Yoga Institute has been training yoga instructors in various curriculums for years. If you are not a surfer or a yogi, nature watching and nearby adventure sports round out the many things you can do in the area.

With a registered population of only 5,800 people, Nosara swells in winter with tourists and seasonal residents. They are well catered for with over 30 restaurants—from local sodas (small Costa Rican family restaurants) to fine dining options.

Since Nosara has become a hotspot for real estate, prices now compete with North American rates. Deals in Guiones and Pelada can still be found on small, moderate homes for around $300,000 to $400,000. A nice family home with three to four bedrooms and all the modern amenities can be found for around $600,000 to $800,000. And like anywhere, luxury in Nosara has no limits, with palatial home prices ranging from $1.2 million to $6 million. There is, however, a complicated land dispute over some of the territory here, which was double titled. So, it is important to have a local Costa Rican attorney verify clear title if you are interested in buying property.

Because there is less development in Nosara, not many apartments and condos exist like in other beach communities. Therefore, if you are looking to rent, it will most likely be a house. Smaller homes or studio apartments are available on long-term contracts for $1,200 to $2,000 a month. For a larger family home, you can expect to pay closer to $3,000 to $4,000 a month. Due to a conscious effort not to allow more development, if the economy continues to grow, this can only mean increased values in the area.

Cost of Living in Nosara

Below is a monthly budget for a couple living in Nosara: 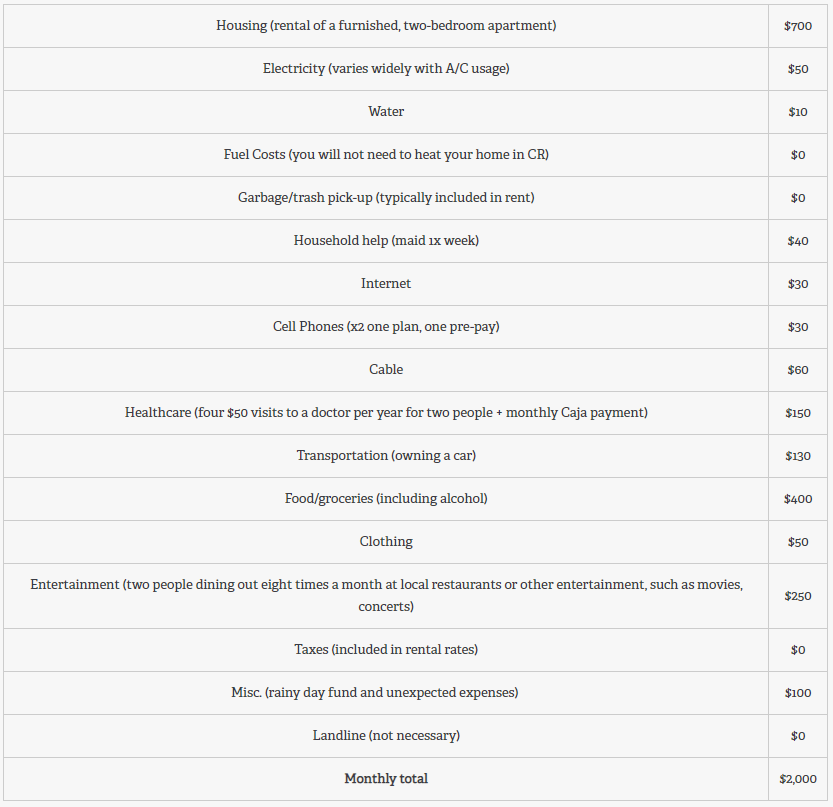 Nosara may be pricier than other spots in Latin America, but with the Blue Zone quality of life—  it’s like no other place on earth—and that’s priceless.

On the Nicoya Peninsula, on Costa Rica’s northern Pacific coast, is the community of Nosara. Known for its consistent waves, yoga studios, and somewhat remote location, this collection of beaches (Guiones, Pelada, Nosara, and Ostional) has virtually no shoreline development thanks to a large wildlife refuge designed to protect nesting sea turtles.

As a result there are no large resorts or condo or hotel towers looming over the sand. And most expats live in homes in the forest just inland from the water. Nosara is popular with retirees, young couples, and families…just about anyone seeking a laid-back life on the beach.

There are plenty of restaurants, from Italian to American pub food, and plenty of services and amenities, including banks, grocery stores, and doctor’s offices. 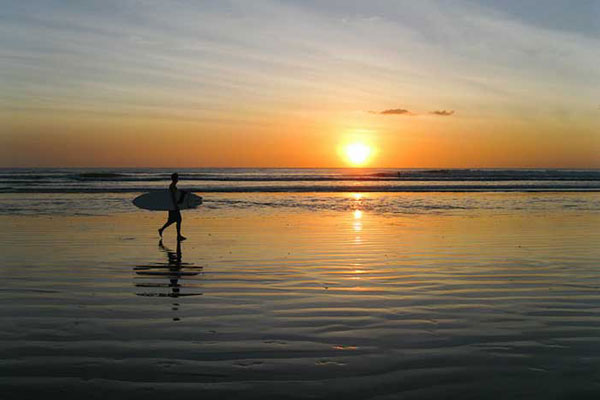 I’ve always lived near the coast. But in Florida, where I’m from originally, a trip to the beach wasn’t always fun, thanks to crowds, noise, and looming hotel towers.

But during my recent trip to Nosara, a Pacific-beach community on Costa Rica’s Nicoya Peninsula, I found the polar opposite of those overrun Stateside beaches…and a place unlike any other I’ve visited during my two years in this country.

The seabirds diving for fish in the shallows outnumber any people on the beach. Rough lean-tos of palm fronds or sarongs strung between bits of driftwood provide shelter from the tropical sun along miles-long stretches of sand. And a large wildlife refuge (meant to protect nesting sea turtles) means no development along the beach—no homes, no condos, no hotels. Sunsets are enjoyed with a cooler of cold beers among friends with toes in the sand, not on a terrace of a fancy resort.

I’d heard about how special Nosara was for years, due to the natural beauty and its active expat community. But it took me a while to visit because it’s not as easy to get to as the beaches along the Central Pacific coast and Southern Zone.

Jutting out into the Pacific on the country’s northwest corner, the Nicoya Peninsula is set apart geographically from mainland Costa Rica. It’s more than an hour’s drive to the nearest sizable city, Nicoya. And from the capital, San José, and the main international airport there, it will take the better part of a day and include a mix of rough dirt roads and pavement winding through forest, farmland, and mountains. One route, to the southern tip of the peninsula, even includes a ferry crossing. And travel through the peninsula can be tough. Some roads are impassable during the rainy season from May to November.

But Nosara doesn’t feel isolated—just off the beaten path. It has a small-town atmosphere where everybody knows everybody. You have all the modern amenities: high-speed Internet, cable or satellite TV, fully-stocked grocery stores with plenty of imported items, and restaurants from brick-oven pizza to fine dining. You can live comfortably, though it’s come a long way in this regard.

Electricity came in the early 1980s. Landline phone service came in 1999, cellphones in 2002. Before then, CB radios came standard with homes.

“The first people here had building materials brought by boat to a spot down the coast, then taken by ox cart to the building site,” says Peter Burke, 70, who moved with his wife, Faith (also 70), from Buffalo, New York. “When we came in 1991, only six or seven local people had cars.”

“We were looking for a warm place to retire. And one of our motivations, other than great weather, was to live a more ‘challenged’ life. We wanted to learn a new language and be immersed in a new culture,” says Faith.

There are a few town centers in this area. In Nosara, the traditional Costa Rican town, you’ll find the local “general store” that has staples, produce, and even a lot of imported food items, but it also carries tools and other hardware supplies. This is where most people do their grocery shopping. Closer to the beach, just a short walk inland from Guiones, is another town center of sorts. It has boutiques, real estate offices, and restaurants geared to the expat and tourist crowd, with tanned beachgoers zooming by on ATVs—a preferred mode of transport.

Pelada is one of the area’s best swimming beaches and is the site of the local fishing cooperative. You can catch the boats on the beach or flag down the pickup truck with a big freezer as it goes through town. Fresh sushi-grade atún (tuna) and dorado (mahimahi) are about $6 a pound. You’ll also save by sticking to fresh fruits and vegetables at the local farmers’ markets and roadside stands—about $25 should fill your fridge for the week. Costs for most everything else in the store are about 15% to 20% higher than other areas due to being trucked in to this somewhat out-of-the-way area and its popularity with visitors. But there are still reasonable prices for housing available, especially considering the seaside location.

The vibe in Nosara is bohemian, thanks to all the surfers (Nosara is well-known for consistent, quality waves) and the plethora of centers for yoga and other wellness practices.

It’s easy to see why the natural beauty and relaxed way of life in Nosara has been attracting expats and tourists to this up-and-coming hidden gem for years.