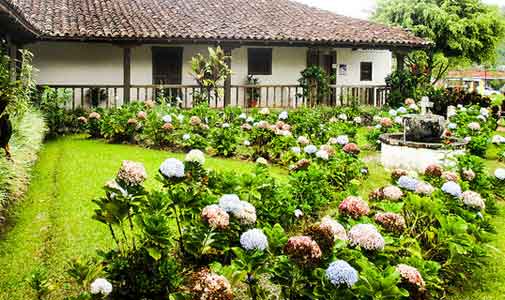 The Orosi Valley has not been highly visible on the expat radar screen, but that doesn’t mean it isn’t a highly desirable location. But just like anywhere else in Costa Rica, the right spot for one person isn’t always the right spot for someone else.

When choosing and overseas home, it’s often the case that the location chooses the person. So often people think they know where they want to live before moving here, but then end up in an entirely different locale that “called” to them.

The Orosi Valley is a mountainous region in the center of the country that has elevations that begin around 3,200 feet and rise upwards to 5,000 feet. And those changes can occur in as little as a mile or two from one place to another. Why is that bit of Geography 101 important? Because temperatures vary with altitude. You can fine tune the weather to your specific preference by just adjusting where you live on a mountainside. All that means there is a pleasant eternal spring present year-round, so no need for air conditioning or heating.

And here’s another little-known tidbit—the Orosi Valley tends to run five to seven degrees cooler for the same altitude as the Central Valley.

You’ll also experience a much more traditional Costa Rican lifestyle here as there is very little North American tourist influence. Your friends will be farmers, teachers, and small business owners—people like you. It’s small town life at its best.

That doesn’t mean there aren’t big city opportunities nearby. Cartago (which was the original capital of the country before San José) is ripe with modern malls, international cuisines, and healthcare options—including a new, state-of-the-art, private hospital.

The three principal towns of the valley are the quaint namesake of the area, Orosi, the small hamlet of Cachí, and the county seat of Paraíso (which means “paradise”). But there are several smaller villages dotting the hillsides and river-ways, like Navarro, Rio Macho, and La Alegría.

Life is much simpler in the Orosi Valley. But it does mean you have to find alternative ways to do some things—like locating real estate. There is not a single official real estate office in the valley. Most “real estate agents” are just folks who know of properties for sale. You will find some properties listed online, but don’t be surprised if the same property is listed on three different sites at three different prices.

Most often though, properties are found via word-of-mouth or by just driving around and finding se vende (for sale) signs posted. There’s a saying in the area that everything is for sale—for the right price. Even if there isn’t a sign, it doesn’t hurt to stop and ask about any property you have an interest in. And since little English is used in this area, your best search results will come with using Spanish—both online or in person.

But don’t let that discourage you. It means that prices are generally much lower than around the better-known areas. Speaking of prices, they are generally very negotiable. IL’s Central Valley Correspondent John Michael Arthur, who lives in the Orosi Valley says, “My three-and-a-half acre property, with a river, views to the Irazú Volcano, and a 4,000-square-foot house had an original asking price of $500,000. We paid $225,000.

“I know of a fellow who just bought six-and-a-half acres on a mountainside just outside Orosi for $62,000. And I know a Tico (local favorable slang for a Costa Rican) who just built a three-bedroom, two bathroom, mid-century, modern-style house for under $55,000.

“Yesterday I saw a new, two-story, 2,000-square-foot house on a well-maintained road with remarkable mountain views. It has an asking price of $100,000.”

It’s definitely a buyers’ market. This is the result of several factors. There had been an upsurge in building in the early 2000s but with the downturn in the U.S. economy in 2008 that stopped and it left several properties up in the air. Also many people then decided to sell their second homes here. So properties have sometimes been on the market for a few years. As a buyer, that is a big advantage due to the hunger of the sellers. But be forewarned, you would be in that same boat should you decide to sell.

Rentals in the Orosi Valley

Here at International Living, we recommend you always rent for at least six months before you buy, to be sure you have found your exact Shangri-La.

Most rentals are going to be Tico-style houses. That means smaller houses with smaller rooms. It doesn’t necessarily mean they are without style though. And they are always spotless. John Michael says, “I know of a second-story apartment nestled in between some huge two-story houses in a very desirable upper-middle class barrio (neighborhood). It has two bedrooms and one bathroom. It also has primary-forested mountain vistas behind and panoramic views toward two distant towering volcanos in the front. And if that’s not enough, the price is $265 per month—and you can lock that in for three years.”

Your rights when buying property

Expat property owners are afforded the exact same rights as a citizen in Costa Rica. The closing process is simple: you and the seller meet at the lawyers’ office. A single-page document is used—one side basically says “I’m selling my property to…” and the seller signs it. The reverse side says, “I’m buying this property from…” and you sign it. That’s it. The cherry on top of it all? Property taxes are dirt-cheap. “The property taxes for my three-and-a-half acre property are just $350 for the year,” says John Michael.