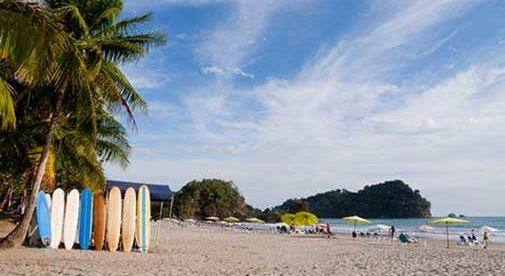 I have lived in five U.S. States and three countries and, for the past 10 years, I have been an expat resident in Quepos, a small town on the Central Pacific Coast of Costa Rica. I can truly say I’ve never enjoyed living in a place more than I have here.

The town of Quepos is about 10,000 people and the entire canton or county is only about 30,000. The population is augmented substantially during the winter months (January to May, our summer) by tourists and semi-permanent owners and renters (in Florida we called them snowbirds).

There are many activities in the Quepos region, particularly for those who enjoy the outdoors in a warm and sunny atmosphere during much of the year.

Things to do On Foot

Hiking at all skill levels is commonplace here. You can start with the most visited reserve in Costa Rica, Manuel Antonio National Park.

Here you’ll find relatively flat trails that can be walked in a couple of hours. And  present a wide variety of wildlife including; three types of monkeys (squirrel, whiteface, howler), sloths (two and three toed) as well as poison dart and other multicolored frogs, assorted reptiles, and several birds.  It is recommended that you hire one of the official tour guides as they will know where the wildlife is on the day you visit.

More ambitious mountain trails lie 15 to 20 miles east of Quepos in the foothills of the central mountain spine. Many of the tour operators in Quepos run vans or buses to these more remote areas and include it in the tour. Some of these trails are breathtaking but may require more advanced hiking skills and therefore, care should be taken to discuss your capabilities with the tour operators. Likewise, zip lining in the forest canopy is available both locally in Manuel Antonio and farther out in the canton. If you really want to test your skills as an accomplished hiker you could try climbing Mount Chirripó, the highest peak in Costa Rica at 12,500 feet which is only about 2 hours away.

You can also visit a picturesque waterfall like the one at Nauyaca about an hour ride south of Quepos. There are several other beautiful waterfalls in the area as well, some of which have natural swimming pools associated with them. Or take in a butterfly garden in Manuel Antonio or a spice farm about 10 miles east of Quepos where you can get herbs and freshly made vanilla among other specialties.

Things to do By, On or In the Ocean

Having grown up on an Atlantic Ocean beach I know that sometimes it’s simply a view of the ocean that can bring on a feeling of serenity. In my opinion you can double that feeling for Pacific sunsets.

Quepos was built in the 1940’s by constructing a dyke across a swamp between two coastal mountains and then filling in the swamp. That dyke, called the Malecón, is now a beautiful river-walk that offers spectacular sunsets. Of course that view is also available up and down the coast including Manuel Antonio which is contiguous with Quepos.

Two beaches in the immediate area include the beautiful small crescent beach within the Park (which is the official Playa Manuel Antonio) and Playa Espadilla, the largest beach in the area and a mile-long stretch of sand just outside the park that backs into the rainforest.

At Playa Espadilla you can choose from several activities such as parasailing, jet skiing, riding in a banana boat, snorkeling around some of the rock islands just off the coast, surfing lessons, and board rentals. Then, of course, there is just plain swimming in warm water that has verdant rainforest as a backdrop.

There is much more to do in this Pacific water wonderland besides going to the beach. From the marina in Quepos you can get a catamaran and sunset sailing excursions that give day tours up and down the coast stopping in gorgeous rock coves to swim and snorkel. At certain times of the year (September is peak) whale and dolphin watching is a favorite.

Another interesting tour is a boat ride through the mangroves near Damas Island, a small village just a few miles north of Quepos. Here you’re liable to see giant termite nests, storks, crocodiles, and much more while learning about the different types of mangroves and how they relate to and benefit the environment.

Also from Quepos (Marina Pez Vela) you can arrange come of the best sport fishing in the Americas. There are billfish (catch and release) and other tournaments several times a year and records are often set here, like the 60-pound black Snook taken off Quepos recently that is a world record. Marlin, Sailfish, Tuna, Roosterfish, and many others are plentiful in these waters; and there are still a number of restaurants here that will cook your catch of the day to your liking.

Let’s not forget that at the end of the day, after the sun goes down, we have a choice of some four or five dozen restaurants and bars in Quepos and Manuel Antonio to relax in after the day’s activities. The restaurants range from basic Costa Rican restaurants called “sodas” which offer a simple platter of nutritious and filling food at a bargain price all the way up to eclectic international cuisine. There’s something for every taste and age.