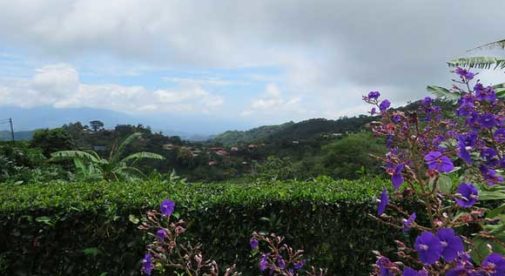 “It was the best move of my life,” says Michael Harris of his new life in Costa Rica. “I feel like I’m living in technicolor now.”

Back in the States, Michael worked as a director for an IT company but was laid off in a corporate take-over. Instead of hitting the job sites and diving back into the rat race, he saw this as an opportunity to pursue a life-long desire to move overseas.He had been visiting Costa Rica for many years and had fallen in love with the country’s natural splendor. With a severance package of a year’s salary in his pocket, Michael knew it was now or never. “So I jumped.”

In Cachi, a Costa Rican village of only 3,500 people at the southern end of the Central Valley, Michael found everything he dreamed of for his life overseas. He loves the small-town atmosphere and the deeply-rooted history of the area, as well as the variety of outdoor activities found on Lake Cachi.

At an elevation of 3,800 feet, the climate is perfect for Michael, who never uses air conditioning and heating. “Who needs it with days in the 70s F and nights in the 60s F?” he says, noting that his health has improved greatly since he moved. “I never have respiratory infections anymore. Migraines are a thing of my past. And I’ve lost weight from walking up and down the mountain trails. Even though I eat as much as I want, I eat from the fresh selection of fruits and vegetables that grow all around me.”

Michael says living in Costa Rica is just “like living in Epcot,” referring to the Disney theme park. “You travel a short distance, and it’s like you’re in an entirely different country,” says Michael. Costa Rica has 12 different microclimates within a footprint smaller than West Virginia—picture rolling mountains, open plains, and lush river valleys punctuated by towering volcanoes.

His leisure time—which is most of his time these days—is spent in two primary ways. He drinks fresh-ground java direct from the nearby coffee fields while sitting on his terraza (a balcony-like porch)—he still finds himself dumbfounded by the stunning natural beauty that surrounds him. Or he enjoys exploring the scores of outdoor activities within 10 minutes of his mid-century, modern-styled highland home—rock climbing, whitewater rafting, ancient ruins, natural volcanic hot springs, national parks, birdwatching, or the plethora of restaurant options.

At only 50 years old, with six months of total relaxation (and half of his severance package gone), Michael realized that he wasn’t quite ready for an unabridged, work-free life just yet. “I have always been fascinated by airplanes,” he says. “So, I became a flight attendant. It allows me to live in Costa Rica and still have my dream life.”

Because the cost of living is so low—his monthly costs are less than $2,000 he flies only one week out of the month. That covers his monthly expenses and provides his health insurance. “When utilities add up to less than $160 per month and I can get the best, large pizza I’ve ever had for only $10, what more do I need?”

Even though his travels during his week of work take him to other fair-weather, low-cost destinations like the Dominican Republic, Cancún, Peru, and all over the States he says he always feels at home when he returns to his emerald valley.