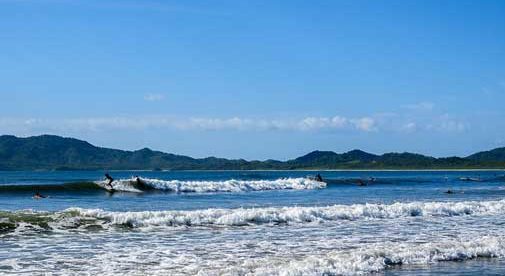 Learn more about Costa Rica and other countries in our daily postcard e-letter. Simply enter your email address below and we’ll send you a FREE REPORT - Why Are Americans Still Flocking to Costa Rica.

“Gold Coast” is synonymous with an idyllic beach paradise. Among the few stretches of coastline on the planet that share this nickname is Costa Rica’s northern Pacific coast. And deservedly so. For me—and the thousands of expats who call this region home—this is beach living at its best.

A drive between towns will take you through mountains and valleys covered in tropical dry forest and pastures dotted with grazing animals. But the pristine Nicoya Peninsula beaches are a point of pride for the nearly 400,000 people who live here.

The country’s driest region, the northern Pacific enjoys sunshine nearly every day; temperatures are consistent, between 80 F and 90 F all year, and the varied landscape lures outdoor enthusiasts. “I couldn’t pick a better place for my family,” says expat Terry Anderson. “We like to go outside and play—surf, fish, mountain bike, run, hike—and we can do it wearing shorts and t-shirts 365 days a year.” The dry climate also makes this region much less humid than the central or southern Pacific coasts.

Some of the most popular expat communities, like Playa del Coco, Tamarindo, and Nosara, offer conveniences for daily living. This region attracts more tourists than anywhere else on the Pacific coast, making it a hub of infrastructure and activity.

This stretch of coast is also famously transition-friendly for foreigners. New Yorker Sarah Kahi Goitz says that living in the popular beach town of Tamarindo offers the experience of a foreign country and culture, but also plenty of comforts. “Within the first two months, I met more people here than anywhere else I’ve lived,” she says. She attended a “ladies’ night” for expat women during her first week in town. The organized group mirrors many you’ll find within expat communities on the north Pacific coast.

Damon and Cristina Mitchell also live in Tamarindo. “There’s a great sense of community here, and we like to go out and enjoy it. We spend between $1,200 and $1,400 a month, the biggest variable being entertainment.”

Their 500-square-foot apartment in Tamarindo is within walking distance of the gold-sand beach. At $650 a month, it’s much more affordable than the $1,500 they once paid in Los Angeles.

The region offers several one-of-a-kind treasures to offset the buzz of busy beach towns; roads that, on the whole, are well maintained make them accessible. Playa Conchal is reminiscent of a Caribbean, white-sand beach, but a closer look reveals a shore of crushed seashells. The water is crystal-clear, perfect for snorkeling. Las Catalinas, Playa Hermosa, or Playa Pavones will leave you with a new appreciation for black-sand beaches; they sparkle in the sun as if someone has sprinkled glitter beneath your feet. It’s common to have the beach to yourself: just you and the calm lapping of the waves, enveloped by tropical vegetation.

Eternally popular with retirees, the Gold Coast attracts expat families, too. Gary Burchett and Rachel Sainsbury landed in the village of Potrero after road-tripping from Mexico to Costa Rica. Gary admits that, compared to its Central American neighbors, Costa Rica is not the cheapest. But despite this, his family intends to stay. “Electricity can be expensive, for example, but I’d say it’s the distinct tradeoff of a country that produces 98% of its power from renewable sources.

“This community is special because most of us have traveled here with similar ideals and desires: to live life to the fullest and revel in a simple, peaceful, happy existence.”

Learn more about Costa Rica and other countries in our daily postcard e-letter. Simply enter your email address below and we’ll send you a FREE REPORT – Why Are Americans Still Flocking to Costa Rica.
This special guide covers real estate, retirement and more in Costa Rica and is yours free when you sign up for our IL postcards below.

I was born and raised in Michigan and lived in Chicago as an adult. Harsh winters have been the name of the game most of my life. When my husband and I decided to make a move abroad, warm weather and sunshine year-round were at the top of our list of criteria.

Learn more about Costa Rica and other countries in our daily postcard e-letter. Simply enter your email address below and we’ll send you a FREE REPORT – Why Are Americans Still Flocking to Costa Rica.