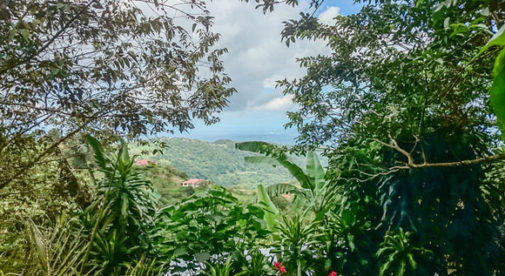 It wasn’t the practical reasons, like lower cost of living, great—and cheap—medical care, and friendly people, that convinced Dave Scott to move to San Ramón, a town on the western edge of Costa Rica’s Central Valley region.

Though the country has all those advantages and more, and while those were factors in the decision, it was something else that drew him.

“It was like an invisible string around my neck pulling me here,” says Dave. “It’s more of a heart thing than a head thing. It’s hard to explain. It was just the feeling I had.”

The severe winters in Maine were also taken into account. But even though it’s in the tropics, San Ramón, like the rest of the Central Valley, has a very temperate climate, averaging about 75 F year-round. Highs are in the mid-80s F, lows at night can get to the mid-60s F. It’s thanks to the altitude—starting around 3,000 feet.

The temps are easy on the electric bill, too—no heat or AC needed. Dave says an average bill is about $120 a month.

Another advantage of San Ramón is the location. It’s in the middle of the country, making travel to other regions easy. Pacific coast beaches are just an hour south. You can be in the rural Arenal region, known for the 33-square-mile lake and active cone volcano of the same name, in about two hours. The country’s main international airport is about an hour east.

The Central Valley also has the best medical care in both the public and private systems, especially in and around the capital, San José, which is just about an hour and a half away. Of course, San Ramón itself has a good hospital and many private physicians.

It’s a thriving regional hub with about 70,000 people in town and the surrounding area, with a bustling downtown centered around a cathedral and large central park. There are dozens of shops, restaurants, and cafés…along with any service you need. There are plenty of cultural activities, too—having a branch campus of the University of Costa Rica plays into that.

And Dave has certainly adapted to the pura vida lifestyle Costa Rica is known for.

“When I interact with Ticos, they don’t seem stressed. They’re happy. There’s less drive to keep up with the neighbors and buy things. Last time we were in the U.S. you could really see a difference there. Here we do with a lot less stuff, and we seem to generally feel better about life,” explains Dave. “My stress level is much lower here. It’s relaxing. Even if you’ve been out all day running errands there’s always the sunset or the birds or something else to mellow you out.”

Dave and his wife eat a diet of mostly fresh fruit and vegetables, along with chicken and fish. It’s all readily available at local markets, including the weekly feria, or farmers’ market. Occasionally, they make a pilgrimage to PriceSmart, a warehouse shopping club similar to Sam’s Club in the U.S. that has branches throughout Central America. You just can’t beat Bisquick for making Red Lobster-style biscuits, says Dave.

The couple stays busy working in their garden (“My wife loves to plant stuff,” says Dave) and hanging out with friends and family. They also volunteer with a San Ramón-based Tico/gringo organization called the Community Action Alliance, which raises money for local charities and groups in need and fosters connections between the expat community and locals. Dave says that the English Conversation Club, one of the Alliance’s activities, consists of about 300 local members who will generate enough income to provide 11 scholarships for local elementary students next year. The couple participates by teaching English to school kids and adults, work they find a lot of joy in.

“Every single day is different and that’s one of the things that makes it so nice,” says Dave.

With 70,000 residents in the metro area, San Ramon, in Costa Rica’s Central Valley, has many of the advantages of big town life: widely available and cheap medical and dental care; an abundance of shops, restaurants, and cafés; and just that feeling of “energy” that comes with living in a bustling regional center.

But it still retains that unique Costa Rican flavor. And being in the Central Valley, the weather is ideal, averaging in the mid-70s year-round.

No wonder many expats have come to take advantage of all that living in San Ramon, Costa Rica provides.

San Ramon is about an hour-and-a-half west of Costa Rica’s capital, San Jose, along the PanAmerican Highway. This makes it easy to pop in to San Jose and its suburbs (Escazu, Cariari, and Santa Ana, among others).

There you’ll find American-style big box stores and malls with your favorite brands from the U.S. for everything from food to clothing. You can also catch a movie in English at a cineplex, go bowling, or dine at one of the high-end (but still affordable compared to U.S. prices) restaurants in the area for a change from the usual Costa Rican fare of rice and beans. You have sushi, steak houses, bagels, and more.

You can get everything from computer software to clothing in San Ramon. But many expats make pilgrimages every few weeks to San Jose and its suburbs to stock up on items they just can’t get anywhere else, like parmesan cheese, coffee creamer, and Ben and Jerry’s ice cream.

Also in and around San Jose, you have the best medical care in the country for both the public and private systems.

Once you become a legal resident, you join the Caja public health system. For around $50 a month, you get free care, from doctor’s visits to major surgery. And the best public hospitals, including Hospital Mexico, are in San Jose.

On the private side, you have world-class facilities at Hospital CIMA in Escazu, and Hospital La Clinica and Clinica Biblica in San Jose. They take private insurance, including many policies from the United States and INS, Costa Rica’s national insurance company.

Many of the expats in San Ramon have taken an active role in the town through volunteering and charitable work.

The Community Action Alliance  is a joint expat/Costa Rican group that works in the local community in many ways. They’ve raised money for retirement homes and orphanages, donated musical instruments to schools, and worked with animal rescue centers. Check out their website here.

Many expats also work as volunteers on their own as English teachers, art instructors, and more.

San Ramon: A Center of Arts and Culture

With a campus of the University of Costa Rica in town, San Ramon is alive with cultural events. Concerts, featuring everything from jazz quartets to full orchestras, occur regularly, with both Costa Rican and overseas groups playing.

If you’re an art buff, there’s also a lively art scene in galleries and other venues like cafés and restaurants. Many local expats have taken up painting and show their work regularly. Local artists are also active. The art is not just beautiful but affordable too.

Where to Live in San Ramon

Most expats who are living in San Ramon, Costa Rica make their homes in the hills and mountains outside of town in rural and semi-rural settings. It’s the best place to get great views of the surrounding sugarcane and coffee fields and natural areas. On clear days, you can see the Gulf of Nicoya to the west from many of those hilltop homes. Three bedroom houses with great views and modern features start at $150,000. Fully furnished rentals with two bedrooms, can be had for $600 or less.

How to Get to San Ramón, Costa Rica?

San Ramon is located conveniently off the PanAmerican Highway. From the country’s main international airport, Juan Santamaria, it’s a little over an hour by taxi or private transport.

But if you’re going to be in the area for a while or plan to explore real estate in the hills around San Ramon, I recommend you rent a car for freedom and flexibility. Just make sure you get a GPS as it’s easy to get off-track on some of the windy mountain roads.

When is the Best Time to Visit Costa Rica

Top Things to Do in Costa Rica