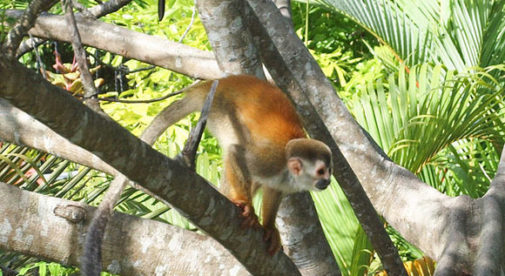 The year was 1997, and my wife, Suzan, and I had just gotten married in a civil service at the Hotel Don Carlos in San Jose, Costa Rica. She remembers that it was my idea, and I remember that it was hers. But whoever thought of it turned out to be a genius, because it set the travel bar pretty high for the rest of our lives.

Our plan was to spend the two weeks after our wedding on the road in Costa Rica without an itinerary…a country neither of us had ever visited before. Our only specific destination was to end up in San Jose at the end of two weeks so we could fly home.

I had grave doubts about this plan, which seemed like the logical equivalent of going up a creek without a paddle. But Suzan said it would be fine.

Which is why, just after sunrise a few days into our journey, somewhere near Playa Hermosa on the northern Nicoya Peninsula, we decided to take the “Monkey Road.”

We asked at the little hotel we’d stayed the night before about the best way to get south, past Playa Flamingo. The lady at the front desk said the regular road was fine and dandy, but if we wanted to see some great scenery, we could take the Monkey Road.

“The monkey road? The road has monkeys?” Suzan asked.

That was enough for Suzan, who was, and still is, always on the lookout for monkeys. “Let’s go,” Suzan said. “What’s the worst that could happen?”

I came up with about a dozen worst-case scenarios, most of which involved getting lost in the jungle and either starving to death or being eaten alive. But the lady at the hotel assured us that the “Monkey Road” (which was not at all marked on our map) was a straight shot and we couldn’t get lost.

So we were fairly optimistic…until about 20 minutes into the drive when we encountered the first split in the road. It simply divided in two, one road veering off to the left and one veering off to the right…with no signs to follow and no one around to ask the way.

Since we were headed generally south and the ocean was to the west, we figured we’d stay to the right. That way we wouldn’t stray too far inland. We made the same decision at the next five or six crossroads we encountered over the next few hours as we went deeper and deeper into the jungle and the road got narrower and less recognizable as a road.

Honestly, the trip became a blur to me about then. As our water and snacks dwindled, our gas gauge fell inexorably toward “E”, and the road steadfastly refused to either improve or end up anywhere, I figured we were well and truly lost. I told Suzan so, and she said, “I know, isn’t it great? Look, monkeys!”

Sure enough. Monkeys. Troops of them, flinging themselves through the treetops above the road. They looked like they knew where they were going.

Suzan’s mood never flagged, even after a few more hours of driving on what turned into a glorified cow trail. Then, coming around one of the several thousand twists and turns…

A tiny cove, just a strip of white sand between two overgrown headlands framing the blue-green ocean, with a couple of rough thatched ramadas thrown together on the beach for shade and a family having a simple picnic under one of them.

We sunk our toes in the sand and blinked in the sunshine and relished the feeling of having arrived somewhere. It was one of the most beautiful beaches I’d ever seen.
Turns out we weren’t far from Playa Flamingo. We had not only survived, but had gotten (almost) where we were going.

After my third beer at our hotel that night, I was pretty philosophical about the whole thing. It was my first experience with purposely getting lost. Suzan, of course, knew well this time-honored strategy of seasoned travelers, and she was trying to teach it to me.

If you want to see something new and interesting that’s not in the guide books, you have to get lost. It’s the only way.

I was very fortunate that I learned this lesson in Costa Rica, because there aren’t many other places on the planet that are so pleasant and so forgiving to be lost in. That was reinforced each day for the rest of our honeymoon as Suzan continued to point down roads that weren’t on our map…and we continued to end up in beautiful places with friendly people and cold beer.

It happened so often that I began to suspect that Suzan really did know where she was going. She knew that Costa Rica was one lovely stretch of beach or mountain pass or quaint craft village after another, and she was secretly leading me to them to teach me the rewards of spontaneity.

In truth, she was just as lost as I was, but it worked. It worked in a big way, and it worked for two reasons.

I was lost with somebody who sincerely believed being lost was a good thing.

And I was lost in the green, sun-drenched gem of the Americas called Costa Rica.

It was a combination that produced one of the best two weeks of my life.