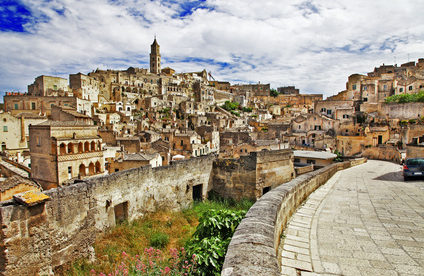 On the eastern side of Basilicata is the region’s most famous and fascinating city, Matera--a UNESCO World Heritage site. ©Freesurf - Fotolia.com

When I tell people that I bought a house in Italy, the usual response is, “How fantastic!” When I tell them it’s located in Basilicata, they get a blank look and ask, “Where?”

I don’t blame them. Basilicata is possibly the least-known region in Italy. Located at the ankle of the boot, it cuddles up to Puglia, Calabria, and Campania and is the most sparsely-populated part of the country. Its people proudly (some may say stubbornly) cling to their traditions and their identity. The region’s ancient name is Lucania and the inhabitants of Basilicata refuse to be called “Basilicatans,” opting instead to identify with their roots and call themselves “Lucani.”

From the border with Puglia, the plains turn into wavy swaths of billowing wheat, then to rolling hills punctuated by olive groves and topped with grape vines. World-class wine is made here from ancient Greek grapes.

In the heart of wine country is Venosa, a classy town with Roman roots and a sense of elegance. To the west is Melfi, a pretty town with an impressive history. It was here that Pope Urban II declared the First Crusade in 1089, and where the Holy Roman Emperor Frederick II issued his constitution, the first written governmental laws of the Middle Ages. Frederick II’s castle, set squarely on the crest above town, is the defining feature of Melfi.

As you travel south, the land rises and peaks begin to appear—some 7,325 feet high at the region’s loftiest level. We opted to purchase in the central part of the region, near the regional capital of Potenza, a few minutes from my ancestral village. Eagles and falcons are a regular sight from our balcony and brilliant starry skies mark the evenings.

Here time-worn towns rest on their hilltops and carry on a way of life that is quickly fading in other regions. Most people have a plot of land outside town to grow vegetables and grapes, and we’re the happy recipients of nature’s bounty by the basket and bottle-full. Neighbors invite us in for a coffee and a chat and willingly lend a hand when asked. They’ve truly made us feel like part of the community.

Because the area has lost residents in the past half-century, there are lots of properties available, but you have to make an effort to find them. Most towns don’t have real estate agents. We found our little 300-year-old casa in the village of Trivigno thanks to the village’s former mayor. We paid just $32,000 for the habitable house with three separate stone-hewn cantinas, used to store firewood and wine. Neighbors have homes for sale by word of mouth, ranging from $26,000 for fixer-uppers to $137,000 for part of a once-noble palazzo to restore.

Because of the lack of estate agents, we offered to list homes that our neighbors are selling on our tourism website, to help publicize their properties to a wider audience, and as a good will effort to try to attract new residents to town.

The palazzo has two interior courtyards and a centuries-old iron key to open the door. It needs work but could easily be converted into four separate apartments to rent out or resell. It sits at the top of town and has great views. In our neighborhood, a friend’s house is for sale for only $63,000—fully furnished. The attractive, one-bedroom house has a spacious cantina carved into the rock below it for storage or entertaining space.

An hour from Trivigno, to the northwest of Potenza, is the pretty, pastel town of Muro Lucano, which is big enough to have a real-estate agency. Here houses line up along a steep ridge in an orderly jumble, looking more like a sunny coastal town than a hill town. Mount Vulture looms up behind as a dramatic backdrop.

Muro Lucano is where Aglianico, the region’s most famous wine, comes from. Muro Lucano’s historic center is a warren of narrow lanes that unfold below the 13th-century castle. There are artisan shops, sidewalk cafés, and a handful of excellent restaurants to enjoy. My favorite eatery, Il Casareccio, is below town, with an open-view, wood-fired grill to perfectly cook local meats. The pastas are made by hand every day.

The lifestyle is leisurely and friendly and homes can be had for a song. I looked at one newly restored apartment going for only $13,000. It’s unfurnished as are most properties in Italy. And it’s small—about 500 square feet. But it feels more spacious because it is set on two levels, with the entry way and kitchen on one level, and the living room and bedroom down a short flight of stairs. It’s the perfect little vacation bolt hole.

A totally-renovated, three-level townhouse with an ample terrace is on offer for only $79,000. Right off the street for easy access and parking, it has two bedrooms and two bathrooms set on different levels for privacy, with two separate entrances and space outdoors for a bistro table.

On the eastern side of Basilicata is the region’s most famous and fascinating city, Matera. A UNESCO World Heritage site, it is thought to be Europe’s oldest continually-inhabited town.

The Sassi section is an astonishing sight—a seemingly senseless humble of houses carved into and built out of tufa stone. But walk out among the houses and you see that there is actually an intricate design at work here. Matera has a buzzing city center, with elegant boutiques, lively sidewalk cafés, and excellent restaurants.

To the south of Matera are craggy, olive-covered hills that give way to the sandy shoreline of the Ionian Sea. The historic town off Tursi basks among the olive groves on a bluff between two rivers, in sight of the sea. Here you’ll find the ancient Saracen quarter known as La Rabatana, dating back to the 9th century, where houses have a sense of history—and low price tags.

A two-bedroom apartment with arched brick ceilings and a panoramic balcony needing restoration is going for $34,000, while a habitable home with two bedrooms, a fireplace, a balcony, and a big rooftop terrace is listed for only $57,600. I also saw a nice country house in the hills, with fruit trees, wood beams, and an outdoor pizza oven, just 10 minutes from the Ionian Sea. It costs $103,500, which I thought was an amazing deal for an independent, two-bedroom and two-bathroom house.

If Italian coastal life is what you long for, Basilicata offers that, as well. On the region’s west side, Basilicata claims a small but spectacular piece of Mediterranean coastline, wedged between the regions of Campania and Calabria. The glittery, sun-drenched, seaside resort of Maratea can claim all the beauty of the more famous Amalfi Coast, but without the crowds or the staggering price tags. The old town is cradled on the hillside above the Mediterranean, while the port of Maratea is a waterfront village with a colorful marina, great restaurants, and hidden coves for swimming. Exotic black-sand beaches highlight the turquoise water. The historic center is filled with vivid ceramics, a bustling piazza with outdoor cafés, and a carefree air.

A three-bedroom home in the porto area, with a terrace and a sea view, is listed for $341,000, significantly more affordable than other Mediterranean resort towns. Up in the historic center, restored town homes can be found in old stone buildings tucked among the quaint, narrow streets. I glimpsed a nicely-restored, two-bedroom apartment in an antique building, with a small patio, on a cute cobbled lane, for only $210,000. And you’ll find other apartments to restore that cost even less.

A small villa with a lush garden, covered terrace, and three bedrooms, located around 500 yards from the sea, is for sale for $497,000. A comparable casa on the Amalfi Coast costs double that price.

Maratea attracts mostly Italian and northern European tourists in the summer, but it never becomes over-crowded. You can still snag a table at one of the seafood eateries, or lounge in a secluded cove for a day of sun and surf in relative tranquility, even in August.

Tips and Advice on Buying Real Estate in Italy

• If you don’t speak Italian, get a translator to help you with the offer and purchase agreement to make sure you understand the terms and details of the deal.

• Even if you don’t use a real estate agent, get a written agreement on the price and terms of sale. When buying from the owner, you may or may not have to pay a deposit when you agree on the price. (Our purchase was a very informal oral contract with the owner and we didn’t pay anything until the closing.)

• Find a good tecnico. Hire a local geometra (surveyor) or civil engineer; he will become your best friend in the purchase process. He will check the land registry records to make sure the title and deed are in order and will inspect the property for compliance to building codes. If you plan on renovating a property or changing land use (for example, from rural structure to habitation), he’ll obtain the permits and advise you.

• Don’t use the seller’s notaio (notary). You pay the legal fees for the notaio, who conducts the closing and legally registers the property purchase. So choose one for yourself to make sure there are no familial ties or other conflicts of interest in the seller’s favor.