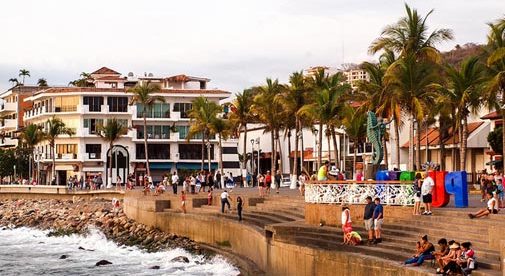 Puerto Vallarta’s malecón is a popular gathering place for locals and expats at sunset.

It feels as though it was fate that brought Bobby Blanchard and Nan Lippard to Mexico…and to the bustling resort city of Puerto Vallarta, on the Pacific coast, in particular. “It’s the friendliest town I’ve ever lived in. People are helpful. When there is a car stalled on the road—people help,” says Bobby.

“There’s a ‘humanness’ that is still here that is missing from the U.S.,” adds Nan. “It’s like a dream. You feel renewed when you get down here.”

It started with a pivotal event that changed Bobby’s life. He was struck by lightning while riding his motorcycle.

“After I got out of the hospital, I had the realization that I had to do something different with my life,” explains Bobby, 57, who previously worked in a stressful career.

Former middle-school sweethearts, Bobby and Nan reconnected later in life on Facebook and decided to start a new life together in Puerto Vallarta. At first, they planned to move in seven years. This turned into three years, which turned into two months. They felt compelled to be there and start fresh. In the end, it was a spur-of-the- moment decision. But it worked out, and they’ve been in the city nearly three years.

“We sold everything and came down on the bus with two suitcases. I can pack my house now in an hour. I’ve come to like it… we’re minimalists,” says Nan, 56.

“She hadn’t been to Mexico before and Puerto Vallarta is a good introduction,” says Bobby. He notes that the town is modern and very international but still works hard to keep many Mexican traditions alive.

The couple is on a budget. And they find they can live well in Mexico, even in Puerto Vallarta—which, due to all the tourism, can be less than affordable.

“We live on pesos; we’re conscious of costs,” says Bobby. “It happens all the time…people tell me how much something is, and I say, ‘Is that all?’”

Rent for their one-bedroom condo is $472 a month, which includes maid service and bottled water. There are also two swimming pools in their community. Because they don’t use air conditioning much, their electric bill is $7.87 a month. “We leave our doors and windows open 24/7,” says Bobby. They pay the same for cable TV and high-speed internet.

“We’re proof you can live in Mexico for $1,000 a month for two people, including rent, food, utilities, gas for the car…although there’s not a lot for extras,” says Bobby.

Their needs are simple, and that’s how they like it.

“The thing I like best is that we don’t have to worry about a house or car payment. We’re debt-free. If it costs you your peace, it’s too expensive,” says Bobby. “There’s a huge freedom in not having debt. If we want, we can get the suite when we go on a cruise.”

Mexico has been good to them. And they’re here to stay.

“We moved to Mexico and made it work,” says Nan. “It’s a peaceful life. I adore Mexico and can’t wait to see more of it.”

Find Out Why Millions of People Visit Mexico Every Year