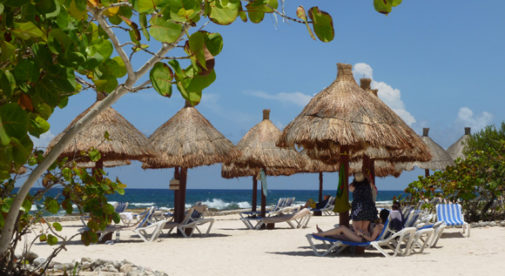 Gene and Patricia have been escaping harsh Canadian winters in Cancún for about 15 years now. They are among a large number of couples who have chosen the life of a “half-pat,” preferring to spend four to six months a year in their second, much warmer, home here on the Caribbean, without committing entirely to the life of full-time expats. The Rousseaus usually leave their Canadian home in early January, enjoying about five months in Cancún before returning in late April or May, depending on the Canadian weather.

“The first time we came here, we really needed a break from the Canadian winter. I found a special deal on airfare to Cancún, and that’s how we chose Cancún over all other warm locales,” Patricia says.

“Cancún was much different then, much smaller and less developed. We only stayed a couple of weeks that first time, but as we got older and our circumstances changed, we returned every year and began to stay longer and longer,” she says. “Now Cancún is our second home.”

The modern vacation mecca has everything needed for a great life, according to the couple. They haven’t felt the need to learn much Spanish, as many of the locals speak English in this tourism oriented area. They say they also don’t need a car. A continuous stream of buses runs along all main routes, offering clean, convenient, and inexpensive access to all areas of the city. Major chain stores such as Costco, Walmart, and Sam’s Club have outlets in Cancún, so shopping is easy and familiar. These days, there are also tons of major brand restaurant chains, along with some great local eateries.

Cancún is situated on Mexico’s Yucatán Peninsula, an area rich in Maya history, with many spectacular ancient ruins. There are thousands of cenotes (underground sinkholes) available for swimming and exploration, along with the world’s second largest reef system just offshore. There is plenty to do, the couple says.

“We love the weather here,” says Patricia. “Canada’s winters can be a bit much to endure, so when we come here, all we really want to do is lie around the pool or sit in the sand, soaking up the sun and warmth.”

“We have a nice group of friends here at the condo, many also from Canada. We all just want to soak in the sun,” says Gene.

“Cancún definitely gives you a lot of bang for your buck,” Gene says. “We live a great life here on the beach for about what it costs us to live in Canada each month. A couple can have a nice life here for about $2,000 a month, and for that, the Caribbean is included.

”It costs them about $350 each for roundtrip airfare from Canada, if they can find a deal—and they usually do. They have stayed at the same condo complex in Cancún for several years (renting every time) and don’t expect to move anytime soon.

“We have it figured out, so it works just great for us,” Patricia says. “We see our same friends every year here in Cancún and enjoy visiting around the pool every day. It’s a great life.”

Cost of living in Mexico