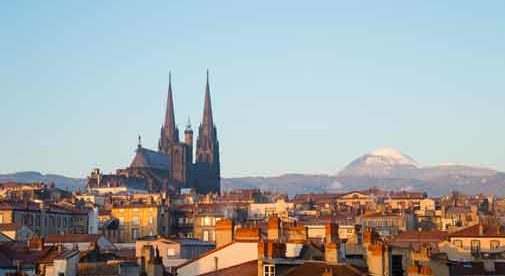 Lulu the horse whinnied low, more like a rumble, as he trotted towards me from the pasture. Next, as was the usual routine, Nunio’s bleats came fast and furious as the sheep bounded in too, at one point running under Lulu’s belly. The comical routine repeated itself each day when I arrived at the tumble-down barn to present buckets of feed and treats, carrots for Lulu and stale baguette for Nunio. It was France after all, and baguettes were the abundant staple of humans and, apparently, pet sheep, too. While I tended the animals, my husband Conrad filled their water buckets.

It was chilly November, month number three of our eight-month around-the-world housesitting adventure.

Each morning in this rent-free rustic house in Lurcy-Levis, Auvergne in central France, Conrad pulled on boots, navigated down stone steps to fetch wood from the big pile outside. If we were lucky, the coals from the night before were still glowing in the fireplace. I opened the huge shutters, waving at villagers walking the cobblestone street to purchase their daily baguettes from the boulangerie. We bought meat and produce from booths set up each Wednesday in the shadow of Église Saint-Martin Cathedral, two blocks away. Our month there gave us a great appreciation for French living; its history, culture, and uncountable fabulous cheeses.

Planning to leave our home town of Ann Arbor, Michigan for eight months took diligence. Conrad’s daughter took over our part-time delivery job. We found a substitute to tackle another small service job we do. Finally, we rented our furnished condominium to a nice couple moving to Ann Arbor.

When we left the U.S. in August 2016, no reservations were made ahead, except one Airbnb in Helsinki, our first stop. We would visit nine different countries house-sitting along the way, before returning home. We stayed in a few more Airbnb’s and two hotels throughout the trip, all for short stays, but most of our accommodation was rent-free.

Four months—and four different rent-free accommodations after our Lurcy-Levis stay, we landed in a luxury home in Australia. The gorgeous contemporary house was tucked into the dense, upscale neighborhood of Coogee, not far from Sydney. Travertine floors flowed from the kitchen-family room combo up to the edge of a Mediterranean-themed swimming pool, creating one huge indoor-outdoor room by way of accordion-folding glass doors. The crystal chandelier hanging from the outdoor pergola sent an opulent message, loud and clear. Whether having coffee in the early morning, or sitting quietly late at night watching the Queen palms sway, we loved that huge room. The uber-contemporary white floor-to-ceiling kitchen cabinets and bold redwood-framed island adjacent to our comfy sitting area made us feel a part of a magazine shoot.

One month later, adjusting to life back in the States took a few weeks. We were changed—humbled—by the vastness of diversity in people and places, customs, landscapes, and foods. Looking back, circumnavigating the planet was easier than we had thought. The big question: Where to next?

The warm turquoise waters of the Gulf of Mexico are just steps from “our” nine-room boutique hotel on the outskirts of  Celestún on the Yucatán peninsula, where we're currently housesitting. Most mornings my husband, Michael, and I have the beautiful white-sand beach and some of the clearest waters in the Yucatán all to ourselves.

As I write about my life here in Cancún, Mexico, it seems like a fairytale and yet, it's very real. The first thing I see every morning, even before getting out of bed, is a clear, unobstructed view of the shimmering, aquamarine Caribbean Sea...just beyond the pool.