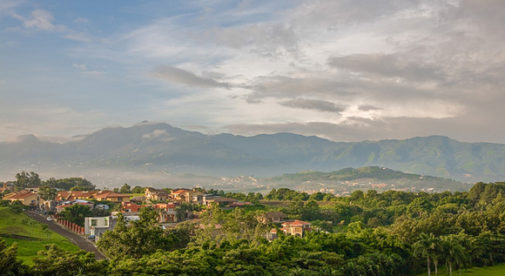 When I first started planning my move to Costa Rica years ago, I got some interesting feedback from more than one acquaintance. “Aren’t you worried about safety? They love to rob gringos there, you know.” I guess they pictured “banditos” crouched in the bushes ready for ambush around every bend in the road. It’s worth mentioning this seemed to be their view of all of Latin America, Asia, and most of Europe.

The 24-hour media machine fuels this “fear of elsewhere.” Footage of revolutions in the streets and masked gunmen stalking the jungle makes for good TV. Footage of people peacefully and cheerfully going to the market, relaxing on their porch of an evening, and doing the sorts of things normal daily life brings, well, that’s not going to attract the TV news crews, is it?

Yes, bad things are happening in the world right now—some of them maybe down the street from you—but they’re certainly not happening in most places.

I felt safe from the moment I stepped off the plane in Costa Rica. It’s not that back home in Florida I felt unsafe exactly. I lived in a nice neighborhood. And I take the view that most people are decent human beings— not criminals. They’re just going about their lives, working, spending time with family, and all that.

But when I lived in Florida I long stopped being surprised to read in my local paper that the gas station I stopped by for coffee in the mornings had been robbed and a clerk shot for the few bucks in the register…or that a dispute over party noise led to a shooting a few blocks away.

That culture of violence gave the whole place an air of menace somewhat. I certainly never honked at anyone in traffic for fear of an armed road rager taking a shot at me—an all too common occurrence. It’s worth mentioning that many people I’ve spoken with in my overseas travels are actually a bit afraid of traveling to the U.S. They’ve seen the news. And it’s no surprise that in their view school shootings are an everyday occurrence and every argument is settled with a weapon.

The fear the media manufactures adds to our very natural human fear of the unknown—something every expat has overcome. To take the step of moving overseas is an act of bravery. There are the niggling doubts, the questions over “what if…” but I can tell you this much: You’re far more likely to meet expats whose biggest regret is not having made the move sooner than those who regret having gone in the first place.

I feel very safe in Costa Rica. And from my conversations with my fellow International Living editors and correspondents in Malaysia, Mexico, Spain, and other far-flung corners of the globe, I know they feel safe, too. They wouldn’t live there otherwise. In rural areas, especially, you’ll find that the fabled 1950s sense of community, respect for the older generation, and civil way of interacting with each other is alive and well in most of the country’s we cover. In the semi-rural Central Valley where I live all my neighbors families have lived there for generations. Everybody knows everybody. No criminal outsider could penetrate this tight-knit community.

Violent crime is rare. When it exists it is primarily violence among bad people: gang members and drug cartels…people who have chosen that life. Most local people and foreign residents aren’t affected.

What you have to concern yourself with primarily is “petty” crime: pickpockets, home break-ins while you’re away, somebody walking away with a bag left on the beach or the backseat of your car. And usually this is focused in the big cities and heavy tourist areas with transient populations. The “bad guys” know the foreigners have laptops, smartphones, and fancy cameras and lots of cash.

This is a tiny fraction of the population. The vast majority are hard-working, good people, and would never do anything illegal. But you do take precautions. I’m wary of the scruffy gentleman offering to “help” me carry my bag at the downtown bus station. I don’t leave my laptop visible in my car, ever. I don’t leave my iPhone on the table when I go to the bathroom in a beachfront restaurant. I don’t dangle my big camera around my neck in big cities—it stays in the bag until I’m ready to snap a photo. Basically thieves are looking for crimes of opportunity. Just as they are in the U.S. And the best way to prevent being a victim is take away that opportunity. Doing so is usually pretty easy.

When you visit Latin America you might see bars on the windows, tall fences, and safes used for valuables. The purpose is simple: take away the opportunity.

Keep in mind that police departments in the developing world are usually underfunded and not well-equipped. Banks, supermarkets, malls, parking lots often have security guards. It’s all about prevention. And it works.

No place is crime-free. But I’m more than willing to take my chances in most of the world. Sure, I keep my wits about me. In Costa Rica you won’t only find a great quality of life with a lower-cost of living, nice weather and beautiful scenery…you’ll find safe places, friendly people, and a secure life overseas.